Daruvala used a well-timed pitstop prior to a red flag to put himself in prime position to score his first feature race win in the category, to add to his tally of three sprint victories, and an investigation for a lap 1 incident was awarded a reprimand.

Poleman Jack Doohan (Virtuosi) had a slow getaway off the line at the start, dropping down the order as Liam Lawson grabbed the holeshot in his Carlin-run car.

Chaos ensued on the exit of the first chicane as Theo Pourchaire made contact with Ralph Boschung, who was attempting to rejoin after cutting the corner, sending the Campos driver spearing into the barrier on the way into Curve Grande as Pourchaire’s ART machine was sent into a spin.

Further up the road into the second chicane, the recovering Doohan was forced into a collision with Carlin’s Logan Sargeant by a swerving Daruvala. The resulting damage forced both Doohan and Sargeant into retirement as the safety car was called, while the clash is currently under investigation.

Out front, Lawson led from newly-crowned F2 champion Felipe Drugovich (MP Motorsport) and Juri Vips, the Hitech driver getting a good jump at the restart to pass the Brazilian for second into Turn 1.

A second safety car then neutralised the race on lap eight when Trident’s Calan Williams was pitched into the barrier midway through the Ascari chicane by Van Amersfoort driver David Beckmann.

With the stricken Trident unable to be safely removed, the race was red-flagged on the ninth lap. But this came after the majority of the field had come into the pits for their mandatory pitstop, with the exception of Williams' team-mate Richard Verschoor – who started on hard rubber – and Virtuosi's Marino Sato.

The leaders had been unable to pit before the safety car was called, coming in a lap after the first group to pit - led by Daruvala - who cycled into third under the red flag. Early leader Lawson was stuck down in 10th for the restart after the red flag, as Trident’s Verschoor stayed on the harder tyre. 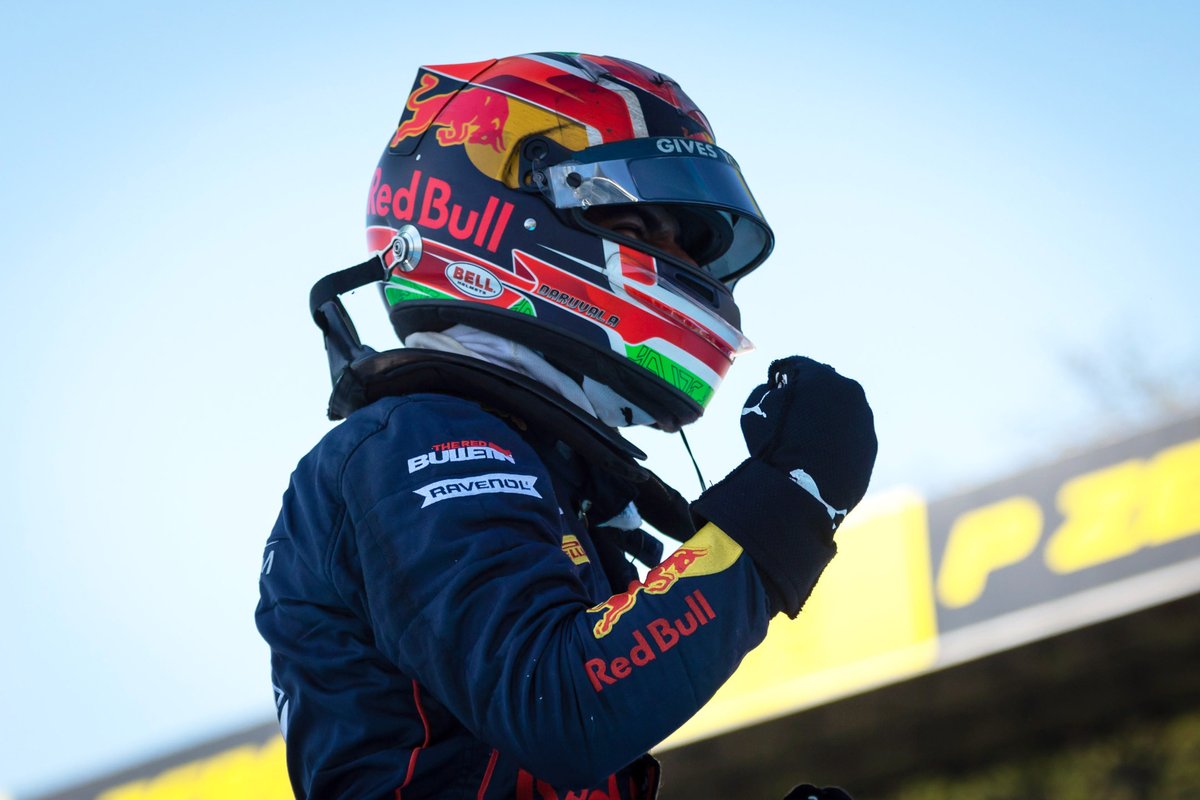 Ahead of the restart, fifth-placed Marcus Armstrong was slapped with a 10-second time penalty for what race direction described as a failure to follow race director’s procedures – most likely for his wild swerve to make the pit entry as he made a late call to come in when the safety car was called.

The race got back underway at 10:55 local time after a brief stoppage, with Verschoor leading the pack. Daruvala moved ahead of Sato into Turn 1 at the start of lap 18, the Japanese pitting two tours later as Verschoor continued to run at the front on his ageing hard tyres.

Come the end of lap 25, Verschoor finally made his mandatory pitstop, releasing Daruvala into a comfortable drive to his first feature race victory.

Frederick Vesti ended up 1.9s off in second in his ART-run car to complete a double podium at Monza after he'd followed Vips home in race one, with the DAMS car of Ayumu Iwasa rounding out the rostrum.

However, Iwasa was later disqualified after the rear plank of his car was found to be below the maximum thickness required by the technical regulations.

This, combined with the crash chaos, allowed Enzo Fittipaldi to claim an eventual third for Charouz, his sixth podium of the season, ahead of Prema’s Dennis Hauger - who served an early drivethrough penalty for an incorrect grid procedure - and Beckmann.

Drugovich was sixth in a scrappy race, passing Van Amersfoort’s Amaury Cordeel late on when he ran wide at the second Lesmo, with Codeel, the second MP car of Clement Novalak and Verschoor completing the top 10.

Lawson’s race went from bad to worse after the red flag restart when he was spun round by Vips at Turn 4 on lap 13. The sprint race winner was hit with a 10-second stop/go penalty for the collision, while Lawson was forced to make a pitstop for a front wing change.

This dropped him out of the points to 13th behind Armstrong after his penalty, Sato and Vips.

As well as the crashers, Charouz driver Tatiana Calderon did not take the start on medical advice.

Drugovich: F2 title win "not how I expected it" after early Monza exit