While the Indian driver struggled comparatively to his teammate in the early part of the year, a mid-season engine change transformed his fortunes and he capped off the campaign with a victory in the Bahrain sprint race.

Prior to the start of the new F2 season, Daruvala will head to the UAE to compete in the F3 Asian Series, where he will drive for the Prema-run Mumbai Falcons team alongside fellow Indian driver Kush Maini.

Daruvala previously drove for Prema in the FIA Formula 3 series in 2019, scoring two wins and five further podium finishes to end up third in the championship.

"I am very thankful to Red Bull for their continued faith in me," said Daruvala. "I'm extremely excited to be staying in F2 and with Carlin for 2021 as a Red Bull Junior.

"We made a lot of progress last year. It was great to end the season on such a high with my first F2 win and then back that up with front running pace in post-season testing. 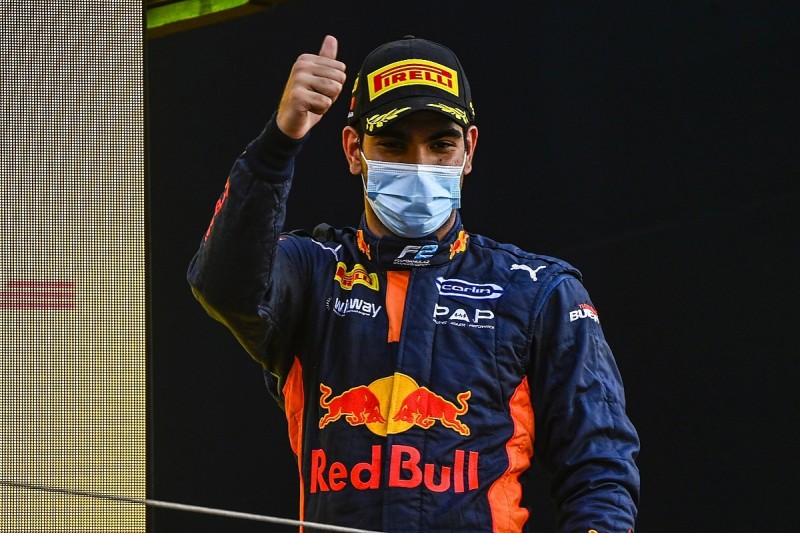 "I'm extremely proud to be carrying Red Bull colours again this season and thank Dr Marko and my sponsors for their continued support and belief in me which I will be looking to repay from the very first race."

Trevor Carlin added: "We're extremely pleased that we have the opportunity to carry on the great progress we have been making with Jehan and have another attack on the FIA F2 Championship.

"Jehan did a great job last season as an F2 rookie, to really show his true potential by the second half of the season. To finish the year off with a third place and then a win really confirms what we knew from the start.

"I expect Jehan to continue where he left off - challenging for wins from the outset in the new season."

Carlin has yet to reveal the identity of Daruvala's teammate but tested with ex-Red Bull junior Dan Ticktum in Bahrain last month, with the Briton expected to secure the race seat after strongly hinting that he will be cutting ties with his 2020 team DAMS.