The Prema Racing driver finished first on the road in the second F2 race in Azerbaijan but lost out to Arden International's Norman Nato when a 10-second penalty he had picked up because stewards deemed he had failed to slow down for yellow flags was applied.

It was the same infraction DAMS driver Oliver Rowland had been found guilty of following the feature race.

Each driver had set a personal best sector after passing through a yellow flag zone.

But the pair both felt they had lifted off sufficiently and ultimately accepted their penalties.

"The rule is not completely fair and [the rulemakers] are aware," Leclerc told Autosport.

"But I also understand the decision because they had to do this with Oliver the day before, so it's quite normal that I got the penalty also.

"I spoke to them and I definitely think it should be changed for the future because it's not very fair."

Leclerc explained that the sector where he set the crucial personal best ended after he had gone past the yellow flags that were out to cover Nyck de Vries' stricken Rapax car towards the middle of the sprint event.

Championship leader Leclerc had also just moved past Artem Markelov, Sergey Sirotkin and Ralph Boschung at the beginning of a charge that took him from eighth to first, and the free space he found himself in meant he improved his best time despite lifting off. 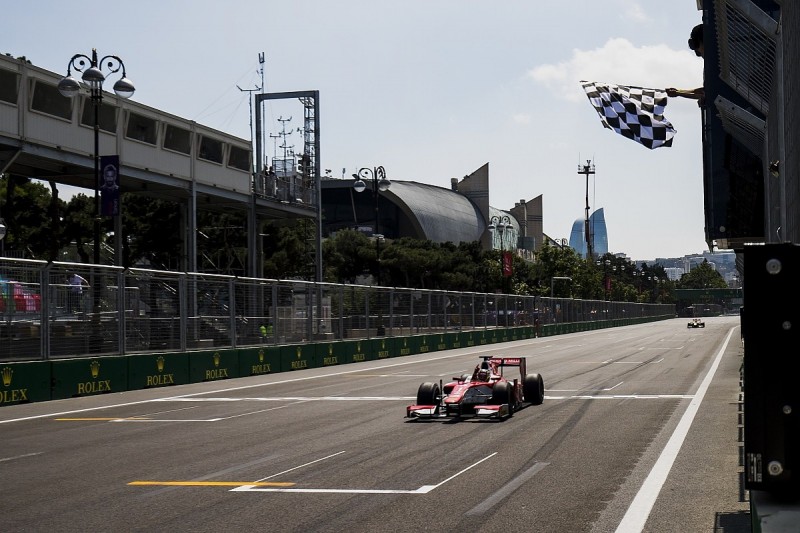 "I was stuck behind the traffic all the beginning of the race, and that was the first lap where I got free of traffic," he said.

"I overtook on the straight with the DRS and then I was free of traffic for all of the first sector, so I improved massively in all the corners but in the particular corner where there was a yellow flag, I slowed down by seven tenths or something like this.

"It's a lot but the overall sector has been improved - but the particular corner that was on yellow flags I slowed down."

The penalty cost Leclerc the chance of securing a sweep of pole, both race wins and two fastest laps, but he was still able to extend his points lead over Rowland as the Renault F1 development driver retired with a gearbox problem while leading the early stages of the sprint race.

"I think we did a good show and that's the most important [thing]," Leclerc said.

"In the end I had a lucky star also because Oliver didn't finish the race.

"But we did an amazing race, we were very fast and yeah, instead of first we did second but it's not a huge disaster and I'm very happy with what we've shown on the track and this is most important."