Renault junior Guan Yu Zhou surged into the lead at the start from third, after his Virtuosi Racing polesitting team-mate Luca Ghiotto got a terrible start and was sent to the bottom of the order at the hairpin on lap one when he was hit by Dorian Boccolacci.

Giuliano Alesi had spun into the gravel trap at Turn 4 earlier in the lap, initiating a safety car.

Zhou and second place driver Latifi pitted a lap after the safety car went in, on lap six of the 37-lap race, and maintained position as the other frontrunners followed.

Nyck de Vries held third in the net order after passing Jack Aitken after the stops, Aitken having jumped from eighth to fourth on the opening lap.

The pitstops meant a number of drivers running the alternative strategy came to the fore with Trident's Ralph Boschung - racing to earn a sponsor for the remaining rounds - heading the order.

Approaching half distance, Arden's Anthoine Hubert - also starting on the hard tyres - made a move and the Renault junior and Arden racer took the lead, then managed his pace knowing he would be able to take the soft tyres when his fuel load was low at the end, at a time when net leader Zhou would be on old hard tyres.

But as Hubert neared his stop, Latifi came to life and overtook Zhou at Turn 1 in a brilliant move around the outside.

Hubert pitted with five laps to go but it was a slow stop from his Arden team, and he emerged in eighth with work to do.

Up front, Latifi extended an unassailable gap to take his third win of the season and his second feature race win, while Aitken fought hard to overturn Zhou for second with just two laps to go. 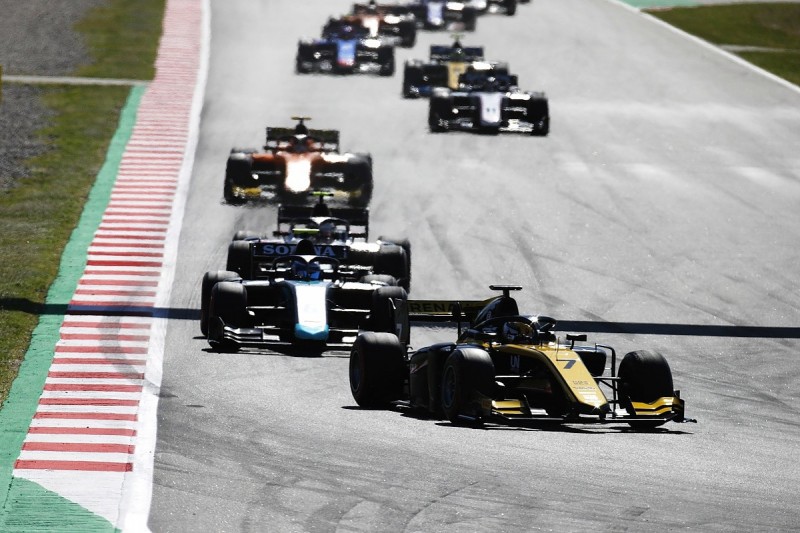 Behind Zhou - taking a first podium in his fifth race in F2 - the drive of the season award went to Ghiotto.

After going to the back at the start from the Boccolacci incident and two pitstops, he roared up to fourth, passing de Vries on the penultimate tour.

Hubert recovered to sixth behind de Vries, having started the race in 15th, again proving why he has been the most impressive rookie of the season so far.

Jordan King ran the same strategy as Hubert, and followed the Arden driver past
Callum Ilott and Sean Gelael in the closing stages to take seventh in another impressive drive.

Rookie Ilott scored his first F2 points with eighth, his key moment being an overtake on Nobuharu Matsushita of Carlin two thirds of the way through the race.

That earned Ilott, who will make his F1 testing debut with Alfa Romeo next week, reverse grid pole for Sunday's race.

Gelael and Boschung rounded out the top 10.