Russell jumped to seventh at the start, and was soon using Baku's long main straight and the additional DRS to work his way forward. He was fifth at the end of the first lap.

He then joined and conquered a three-way fight with Lando Norris and Nicholas Latifi, and set about hunting down Sergio Sette Camara.

Carlin driver Sette Camara locked up at Turn 1 on lap 12 of the 21-lap race, and that, allied to purple sector after purple sector for Russell, meant the Briton was soon on his tail.

With a handful of laps remaining Russell attempted to take the lead at Turn 1 and failed.

But on the next lap, with three to go, he made the move stick and pulled away to a first F2 victory by 2.6 seconds over Camara, who has three podiums in four races for Carlin but couldn't live with reigning GP3 champion Russell in the closing stages.

Nyck de Vries took third with just a few laps to go from Latifi, taking Prema's first podium of the season after the Dutchman had lost second on Saturday with a lock up at Turn 1, which also forced then leader Russell off the road and cost him victory.

Latifi did hold on for fourth at the end of a tough weekend. He spun in qualifying and started on the back row after failing to get a representative lap in, which left him on the back foot.

Norris fought for fifth, after starting third. At the start he had to avoid the polesitting MP Motorsport-run car of Roberto Merhi, as he and team-mate Ralph Boschung stalled on the grid from first and second, with drivers continuing to struggle to get the new F2 2018 car off the line.

Then, in the battle with Russell and Latifi, Norris ran wide at Turn 1 dropping to seventh, which forced the Bahrain feature race winner into a recovery drive, but his top-five finish maintained his championship lead. 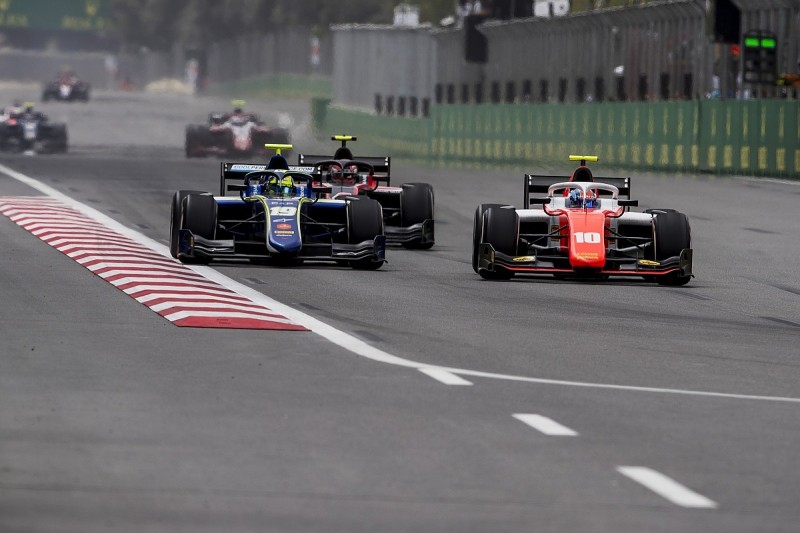 Merhi and Boschung recovered from their poor starts to land eighth and ninth respectively, while Honda junior driver Tadasuke Makino rounded out the top 10 in the sole remaining Russian Time machine.

His team-mate, Bahrain sprint winner Artem Markelov, retired for the second day in a row with mechanical failure.

The previous day's feature race winner, Alexander Albon, stalled on the grid, as did the runner-up in that race Jack Aitken, Russell's ART Grand Prix team-mate. Aitken recovered to 12th and Albon 14th.