Russian Time driver Markelov was 10 seconds off the lead after the pitstops but rapidly closed in on Nato and Ferrari Formula 1 junior driver Leclerc towards the end of the race, using his superior pace on the soft Pirelli tyres to steal the win in emphatic style.

At the start, Leclerc held the lead from pole position while Rapax's Nyck de Vries dropped from second to fourth on the run to the first corner.

Nato surged through to second from third on the grid as the pack made it through the opening corners without contact.

Leclerc could not shake off Nato's attentions and the Arden driver took the lead with a simple DRS-assisted pass at Turn 1, but he found it tough to jump clear of the Prema driver and Markelov, who had quickly risen from seventh on the grid.

Nato's pace suffered the longer the opening stint on the medium tyres went on and Leclerc was able to retake the lead with a similar move down the inside of Turn 1.

As they approached the pitstops around the halfway point of the 32-lap race, Markelov passed Nato and then rapidly closed in on Leclerc.

Nato abandoned his medium tyres on lap 14 and used the superior pace of the new soft rubber to erase Leclerc's lead then catch the 2016 GP3 champion as he emerged from the pits one lap later. 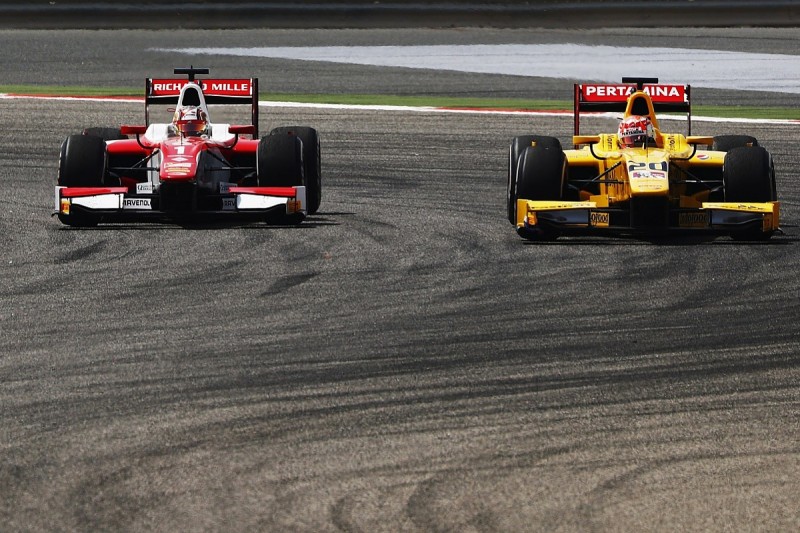 The French driver attacked Leclerc and passed him with a stunning move around the outside of Turn 4 then quickly pulled out what looked like race-winning gap.

Markelov had emerged from his pitstop facing a large disadvantage due to staying out for two further laps on the mediums.

It took until the final five laps until he began to overturn the deficit to Nato and Leclerc but then did so at a scintillating rate and caught the Prema driver on lap 29, easily getting by on the run out of the final corner.

From there Markelov quickly caught Nato - at over a second per sector on lap 30 - taking the lead with an easy move at Turn 4 and winning by 7.8s at the flag.

Jordan King deprived Oliver Rowland of fourth place with a sliding move through Turns 1 and 2 on the final lap, with Alexander Albon finishing sixth for ART Grand Prix.

Luca Ghiotto was seventh in the second Russian Time car and Nobuharu Matsushita, who had struggled massively with the medium tyres before the pitstops, finished eighth and will start on pole for the sprint race on Sunday.

Antonio Fuoco could not recover after he tumbled down the order on the first lap and finished ninth for Prema, with de Vries rounding out the top 10 after falling from fourth late in the race on heavily worn rubber.