The Monegasque driver had to overtake 13 cars after deciding to take an unusual mid-race pitstop in the 23-lap event, and passed Oliver Rowland and Ghiotto on the last lap to seal a dramatic victory.

At the start, Ghiotto got a poor getaway from an effective pole position after mechanical problems forced Nobuharu Matsushita to start from the pitlane, and ART Grand Prix's Alexander Albon shot into the lead on the run to Turn 1.

But Albon did not close the door sufficiently and Ghiotto retook the lead on the brakes at the tight right hander as Leclerc surged from sixth on the grid to third.

The pack bunched up behind and as they ran side by side down to Turn 5, Norman Nato picked up a puncture fighting with DAMS driver Rowland and spun off into retirement at the exit of Turn 6 a few moments later.

The safety car was deployed as Nato's Arden was recovered and when the race resumed on lap four Leclerc drove around the outside of Albon to take second place in sweeping move at the right hander.

Ghiotto held the lead until he began to struggle with his medium compound Pirelli tyres a third of the way into the race and Leclerc breezed past to take the lead at the start of lap nine.

At the same time, yesterday's feature race winner Artem Markelov became the first driver to switch tyres, which is not mandatory in the shorter sprint event. 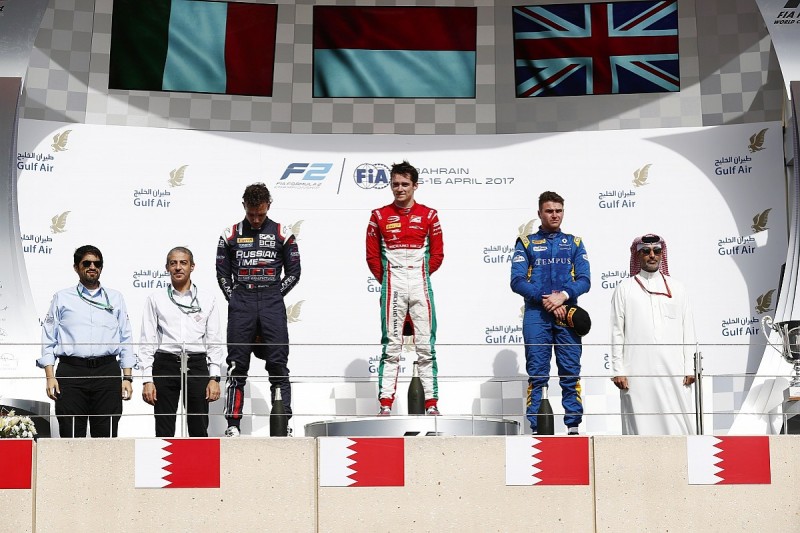 Prema told Leclerc he should switch to "plan b" and pit, so the 19-year-old set about using all the life in his medium tyres before pitting with a 9.4s lead on lap 14.

He rejoined in 14th, 24 seconds behind Rowland, who was now leading the race after passing Ghiotto the lap before.

At times, Leclerc was able to lap four seconds quicker than his rivals and he rapidly picked them off one-by-one before catching Rowland - now back behind Ghiotto after a fierce scrap at the first two corners - midway through the penultimate lap.

Leclerc used DRS to dispatch Rowland on the main straight and then took the lead when Ghiotto locked up and ran wide at Turn 4 on the final tour, going on to win by 1.5s at the flag.

Nicholas Latifi finished fourth ahead of Jordan King and McLaren F1 junior Nyck de Vries, with Albon, who struggled for grip early on, ending up seventh.

Markelov came home eighth - two places behind when he had been running before his stop - as Johnny Cecotto Jr finished ninth in the second Rapax.

Antonio Fuoco lost out badly in the final laps and he fell from second to tenth on his worn rubber, while Matsushita finished 14th after his pitlane start.