Brazilian Drugovich was able to pass polesitting Ferrari junior Ilott at the first corner, enabling him to manage the pace during the opening stint, and this gave his MP Motorsport car a tyre advantage he was able to maximise for the remainder of the race.

Drugovich - who had previously taken two F2 sprint-race wins - and Ilott started on the medium-compound option tyre, and Drugovich was able to go three laps longer before his pitstop.

Ilott, meanwhile, was embroiled in a battle with Marcus Armstrong and Schumacher, each of whom was on the hard tyre, and the Briton's Virtuosi Racing car was down in fourth by the time he pitted on lap 12 of 32.

A sticking left-front delayed Ilott at his stop, but his pace on his new hard Pirellis was sufficient to allow him to pass Drugovich for the net race lead when the MP machine ran wide on its out-lap.

Drugovich then used his fresher tyres to pass Ilott with 13 laps remaining, and was able to extend a 14.8-second gap by the chequered flag.

"I didn't expect pace like this," said Drugovich. "I knew we had a chance to be on the podium but not this way.

"Everything came from taking the lead at the first corner, and I could manage the tyres.

"After the stops I had newer tyres than Callum and I could pass him."

Ilott added: "I don't think we've got the car right on option tyres.

"On hards it was amazing but he had fresher option tyres and he pulled away from me." 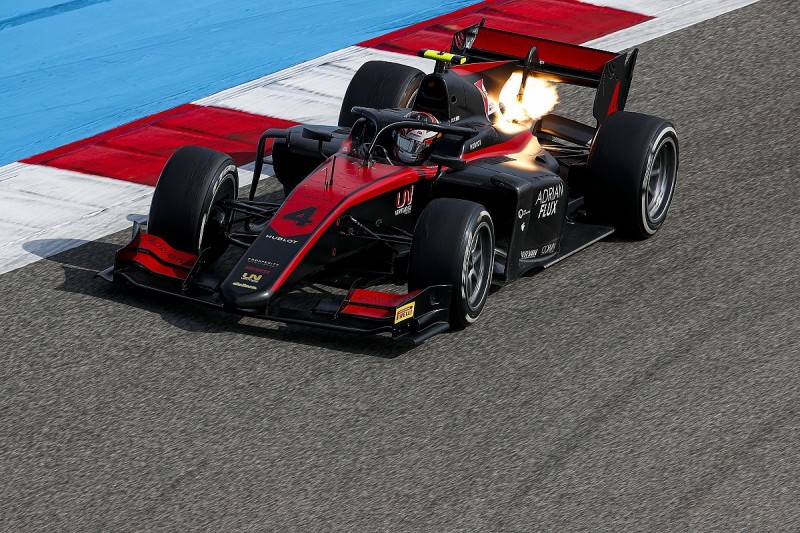 Schumacher, who had made a brilliant start to rise from 10th to fourth on the opening lap, was the last of the leading contenders to pit, with 13 laps remaining, and he was down in sixth when he rejoined.

He made short work of Ferrari junior and Prema Racing stablemate Robert Shwartzman and the ART Grand Prix car of Armstrong to move up to fourth, before zeroing in on the Carlin machine of Red Bull Junior Jehan Daruvala.

The Indian had been running on the fringes of the top 10 in the first stint, but pitted on the same lap as Ilott to get onto the hard rubber.

With two laps remaining, Daruvala had to defend aggressively from Schumacher, and the exertions to get past seemed to take too much out of the series leader's tyres.

Schumacher therefore had to settle for fourth, trimming what was an 18-point gap to Ilott heading into the race to 12.

Daruvala's Carlin team-mate, Red Bull and Honda junior Yuki Tsunoda, was a star of the race as he came within 0.3s of rising from 22nd and last on the grid - following an off in qualifying - to fifth.

Tsunoda ran as long as Schumacher on the hard tyres, and then used his relatively fresh medium rubber to rise from a position in the mid-teens to sixth when he passed Armstrong on the final lap.

At the flag, Tsunoda was just tucking into the slipstream of Hitech Grand Prix's Nikita Mazepin, who made great progress in the second stint, and would surely have grabbed fifth had the race run one lap longer.

Armstrong was seventh and Shwartzman was eighth, giving the Russian reversed-grid pole.

Dan Ticktum made a poor start from third on the grid and struggled for tyre wear to finish ninth in his DAMS car, while fellow Williams F1 protege Jack Aitken (Campos Racing) claimed the final point by passing Luca Ghiotto on the last lap.