Tom Dillmann claimed the 2016 Formula V8 3.5 championship in thrilling style, winning the season finale from seventh on the grid to beat Louis Deletraz to the crown

The AVF racer entered the race trailing title rival Deletraz by six points, with the Swiss driver starting the championship-decider from pole position.

Renault Formula 1 Academy-backed Deletraz lost much of his advantage away from the line, dropping four positions by Turn 1.

In turn, Dillmann moved up to the rear of Deletraz's gearbox in fifth; the Frenchman's progress being assisted by third-qualifier Jack Aitken running off-track at Turn 1.

An intense pursuit of Deletraz was broken off by the AVF pitwall opting to bring Dillmann in for an early mandatory tyre change at the opening of the pit window on lap five.

Fortec reacted immediately by pitting Deletraz for fresh rears a lap later, but Dillmann was able to make effective use of the undercut and grab track position.

Once ahead, Dillmann executed a string of fastest laps to take the lead at the completion of the pitstop sequence on lap 13.

The championship hung in the balance over the closing laps. Had Nissany managed to overhaul Dillmann for the win, Deletraz would have won the drivers' title on tie-break by virtue of his three victories to Dillmann's two. 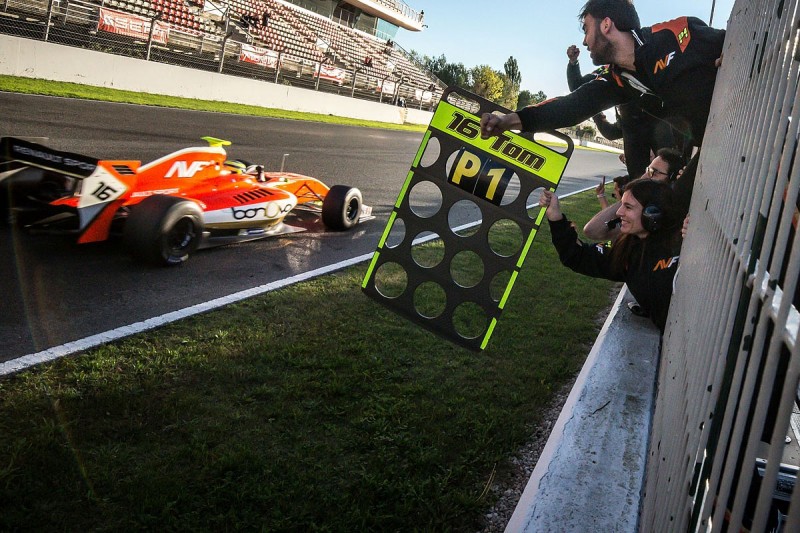 Nissany narrowed the deficit to a little over a second, but after being obstructed by traffic he finished 1.4s adrift at the chequered flag.

"We have been leading for most of the championship, and then to see that lead disappear in the last month was really difficult," said Dillmann, who witnessed an early 40-point advantage disappear after the penultimate round at Jerez.

"It was no one's fault, just that something had broken on the car.

"Everyone at AVF, from Adrian [Valles, team boss] to the mechanics kept believing we could win, though.

" I would have liked to win it a bit easier... but you remember it more like this.

"It was a thriller - an awesome race for the championship."

Fittipaldi earned a maiden podium of the season in third, and the Brazilian was pleased not to face the dilemma of being asked to assist his team-mate's championship cause.

SMP Racing's Matevos Isaakyan led the early laps, but fell out of victory contention when he suffered a lengthy delay from a stuck right-rear wheel nut during his pitstop.

The Russian finished on Deletraz's tail in fifth, and headed the second Lotus entry of Rene Binder.

Saturday winner Egor Orudzhev caused an aborted start by stalling on his tenth place grid slot, but after a pit getaway he provided much action by charging to seventh place, the points earned securing third place in the final drivers' standings.