From pole, Fortec racer Rowland led every lap, and was only troubled on a safety car restart when Red Bull junior Dean Stoneman attempted to run around Rowland's outside at the tight right-hander at Turn 2.

Stoneman's DAMS machine was slightly squeezed wide on the exit and, unable to keep pace with his Racing Steps-supported countryman over the remaining laps, conceded an 8.7-second margin of victory.

"I had opted for a high downforce set-up, which was potentially a risk if we had a lot of safety-car periods because of the DRS," said Rowland, who also recorded fastest lap.

"But I think it was quicker, and I was quite happy when I saw Dean behind me as he was on the same strategy.

"I made a small mistake on the exit of Turn 1 on the second safety-car restart by taking too much kerb, but it is so tight at the following corner that I think I always had it covered."

Stoneman's McLaren-backed team-mate Nyck de Vries opted for a medium-downforce set-up, and completed the podium after gaining three positions on the opening lap.

The Lotus pairing of series returnee Marlon Stockinger and title challenger Matthieu Vaxiviere had threatened to achieve a top result after qualifying second and third.

But Vaxiviere bogged down away from the lights, while Stockinger pitted to retire on the first lap after running very wide over the Turn 1 run-off, potentially after contact with Merhi.

The Pons racer featured in a number of incidents, despite demonstrating an upturn in performance compared to early rounds this season.

He finished fourth on the road, but was involved in a spectacular and bizarre accident after the chequered flag when he was rear-ended at high speed by Arden rookie Nicholas Latifi.

The Canadian had been charging down the pit straight in battle with Tom Dillmann for fifth, and was caught out by Merhi slowing more than expected after the finish. 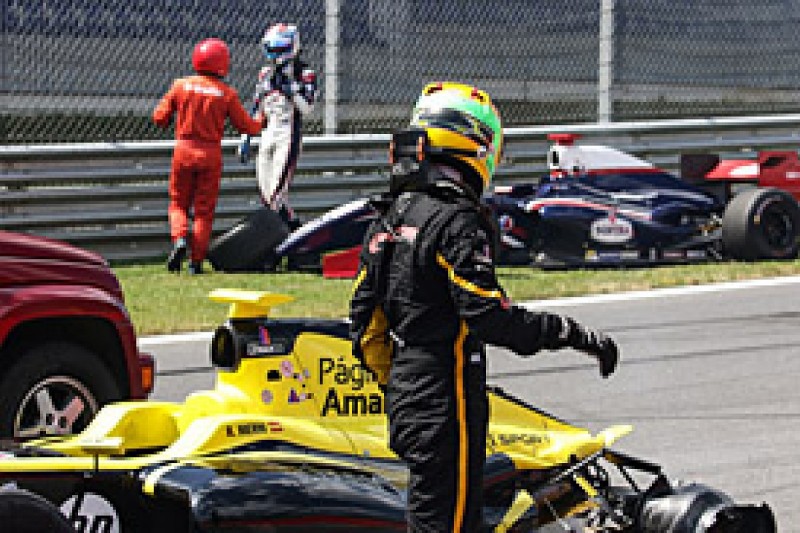 Latifi was sent into a violent roll, and both cars sustained heavy damage.

Merhi had already been awarded a 10s time penalty during the race for exceeding track limits, which relegated him to 11th and outside the points.

The first safety-car period was necessitated on the opening lap, when Merhi's Pons team-mate Meindert van Buuren took to the grass after running alongside Monaco winner Jazeman Jaafar between Turns 1 and 2.

Van Buuren speared across the road as he attempted to return to the track, collecting innocent parties Alfonso Celis Jr and Sean Gelael.

Double 2015 winner Vaxiviere held fourth on the restart and maintained the position until lap 14 when Merhi outbraked the Frenchman on the inside into Turn 2.

Vaxiviere attempted to maintain the position on the exit, only for the pair to briefly touch wheels, dropping the Lotus F1 junior behind Latifi.

Dillmann would demote Vaxiviere to sixth four laps from home, and Rowland's victory hands the Briton a 33 point lead over Vaxiviere in the drivers' standings.