Alex Palou took his maiden Formula V8 3.5 victory in a lights-to-flag performance in just his second outing, at the Nurburgring

Palou, who is stepping in for Nelson Mason at Teo Martin Motorsport this weekend because of budget issues, dealt with the wet conditions with ease as he fought off the attentions of race one winner Matevos Isaakyan.

Prior to the race, the only knowledge Palou had of a wet Nurburgring was from studying on-board videos, but after running the first two laps under the safety car he appeared to be a natural.

Rivals Isaakyan outbraked himself at Turn 2 and ran onto the astroturf run-off in his battle to claim second from Diego Menchaca. He got the move done at Turn 5 as Menchaca was struggling for traction.

The field got just one lap of green flag running before the safety car was called for again as Giuseppe Cipriani found himself stranded on the kerbs at the exit of Turn 4 and retired from the race. 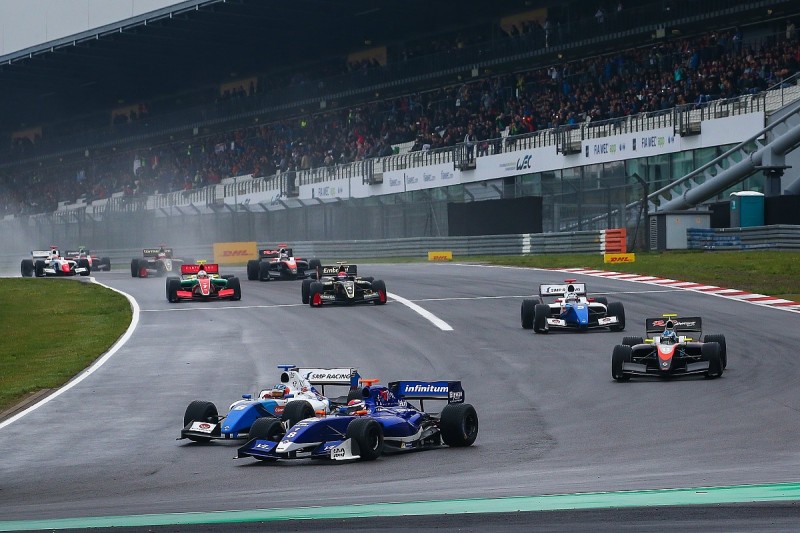 The lack of grip was an issue most of the field complained about, as the low-grip Nurburgring circuit became an ice rink in the wet.

A dry line started to form in the second half of the race and that was when SMP Racing by AVF played a tactical masterstroke with its mandatory pitstops.

Pitting Isaakyan and Egor Orudzhev roughly at the halfway mark of the 40-minute race, the pair had more time to adjust to running on slick tyres and quickly found themselves behind Palou in the podium places.

As Palou pitted with 15 minutes to go, Isaakyan inherited the lead for a time, but a trip through the gravel after outbraking himself at Turn 1 gave Palou back the lead and didn't relinquish.

Isaakyan had fallen to third in the closing stages, but a 10-second penalty for Konstantin Tereschenko for crossing the white line when exiting the pits allowed Isaakyan to claim second place and the points lead.

Orudzhev made it a double podium for SMP/AVF with a trouble-free run to third with Tereschenko falling in behind.

Erstwhile championship leader Pietro Fittipaldi couldn't make up any places from his starting position of sixth, but his nearest rival Rene Binder could only make up one place from 10th.