Stoffel Vandoorne kicked off FP2 with a 1m23.076 marker, but that was quickly brushed aside by Envision's Nick Cassidy - who took the times into the 1m22s.

Finding a sudden burst of pace, the DS Techeetahs swarmed the upper echelons of the timing board, with Jean-Eric Vergne going fastest with a 1m22.246s - with Antonio Felix da Costa two tenths back in second.

The Techeetah cars were then usurped by the Nissan e.dams pair, with Sebastien Buemi on the cusp of breaking into the 1m21s, and his team-mate Maximilian Guenther a scant 0.001s behind.

Pascal Wehrlein then got into the 1m21s bracket, doing a 1m21.723s sporting Porsche's one-off black-and-blue livery for the Seoul round.

He held the top of the timing boards for a good few minutes, before Lucas di Grassi bolted to the zenith of the timesheets with a 1m21.661s - but that was immediately beaten by team-mate Edoardo Mortara's lap which was about 0.4s faster.

Vergne then got back on top, posting a 1m21.233s, 0.036s in hand over Mortara as the Swiss driver had a near-miss with Jaguar stand-in Norman Nato - who was coasting slowly and forced Mortara into deft evasive action as he closed the Frenchman down.

Sims then hit the wall on the exit of Turn 21, damaging his rear-left wheel and stopping just ahead of the pitlane entry. This brought out a yellow flag as the session continued, as Sims remained sat in the car. 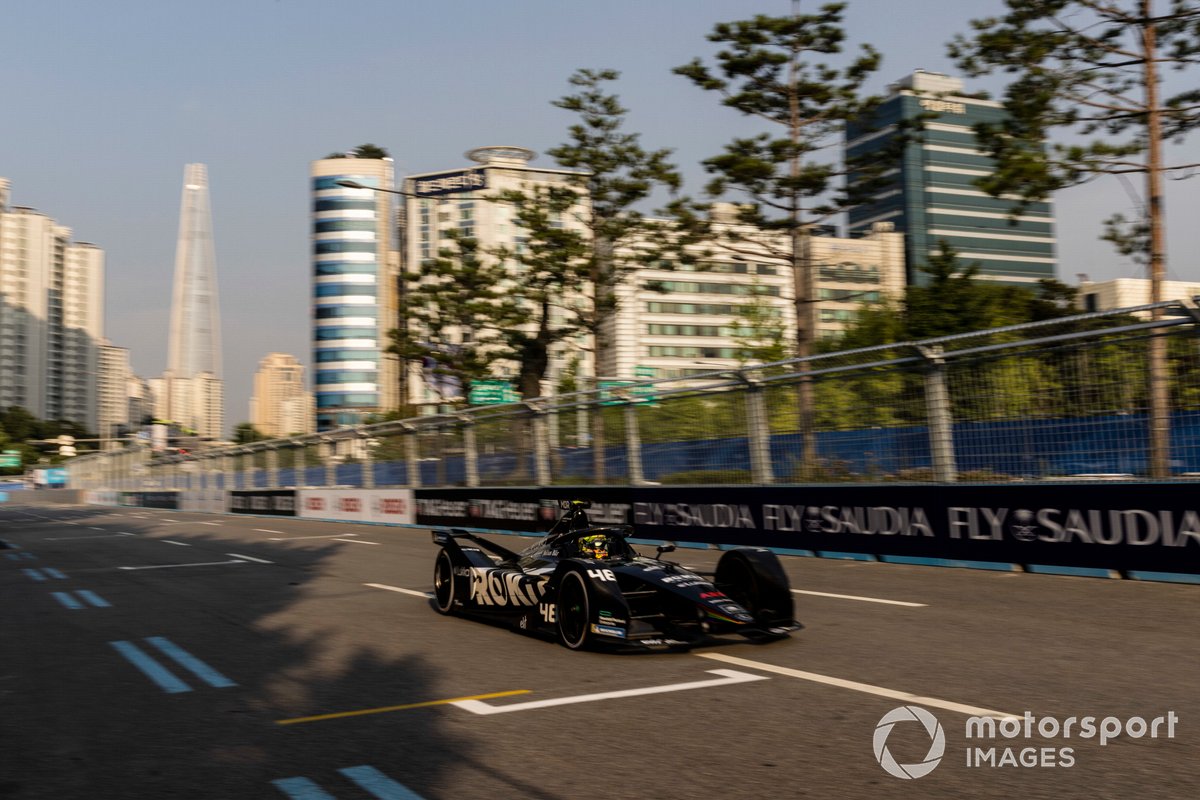 But with around a minute left on the clock, the session was then officially stopped following Cassidy's grind to a halt after passing the finish line - though he was able to get going shortly after.

This meant that Vergne's time was untouched, with Mortara and Wehrlein second and third - the German just 0.002s behind Mortara.

Di Grassi was fourth fastest ahead of Andretti's Oliver Askew, with Cassidy sixth ahead of NIO 333's Oliver Turvey.

Sergio Sette Camara held the eighth-best time of the session ahead of da Costa, with London winner Jake Dennis in 10th.

Points leader Vandoorne was only 16th, while nearest title rival Mitch Evans was 12th - and with rain expected to arrive in time for qualifying, there remains a non-zero chance that the results of FP2 could decide the grid.

Mercedes team principal Ian James stated after the session that the weather radar suggests that light rain will be present for the start of the session - but expected running to go ahead.

Vandoorne had led proceedings in the first practice session with a 1m22.000s, outpacing Edoardo Mortara by 0.013s in the first timed session around the Seoul circuit.

Nick Cassidy had placed third ahead of Lucas di Grassi, who was announced on Friday as Mahindra's new driver for 2022-23.