The 2015/16 FE champion was linked with a return to F1 team Toro Rosso, particularly after Buemi appeared at the recent Singapore Grand Prix in his role as Red Bull's reserve driver.

But it was subsequently announced that Buemi would remain in FE with the e.dams squad - where he has raced since the electric championship's inaugural season - alongside DAMS Formula 2 racer Alexander Albon.

Another ex-Toro Rosso driver in Daniil Kvyat has now been confirmed as returning to the Red Bull junior team for 2018, but Driot explained that the speculation about Buemi helped his squad keep its final '18/19 line-up under wraps.

"Nissan really wanted to keep the drivers in a blank until mid-September," Driot told Autosport.

"But at least we succeeded [in keeping the driver line-up secret] because nobody knew what kind of drivers we were going to announce.

"This is the game - it was quite nice to see that for once we kept our mouth shut and nothing came out of the [F1] paddock rumours.

"A little bit [of speculation] after Monza and especially in Singapore because they saw Buemi with Toro Rosso - it was helping us to see that he was there. It was perfect.

"Everybody was expecting a Japanese driver or a Nissan driver like [Jann] Mardenborough or I don't know.

"So, we let the rumours go and we were quite happy to be able to preserve the news." 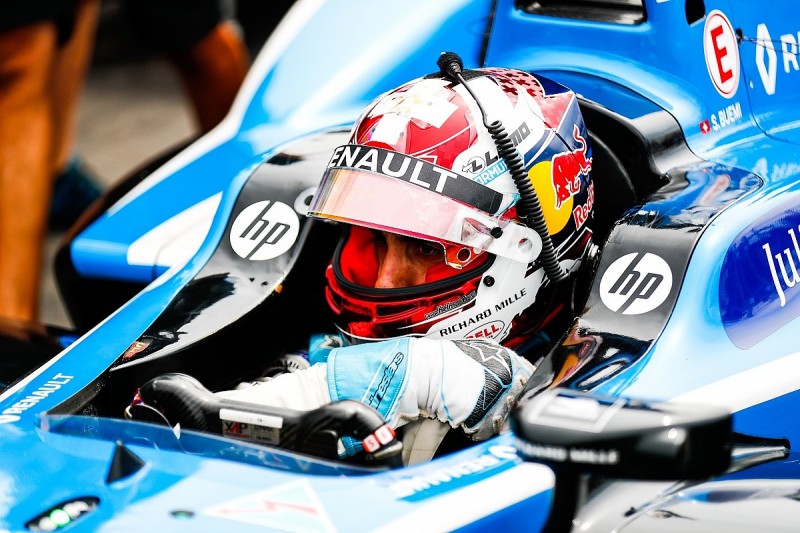 There had also been speculation that Buemi's place at Nissan for 2018/19 was uncertain due to his World Endurance Championship commitments with Toyota potentially leaving him unable to drive for another Japanese manufacturer.

But Driot explained that Buemi's deal to race in season five, which was signed ahead of the 2017/18 season, was never under threat.

"Buemi was signed," he said. "The confusion came a little bit because [global motorsport director] Michael Carcamo from Nissan didn't want to talk when he was asked the question on Buemi - he was saying 'No, I don't know, we will see' or whatever.

"But it's quite clear that Buemi was signed for season five at the beginning of season four - we signed him for two more years.