Dutch driver de Vries, lying third in the standings, took control of the single 45-minute session with a third of the time remaining and then traded times at the top of the leader board.

The 2019 FIA Formula 2 champion had initially moved ahead with an attack mode-enhanced effort of 1m22.275s to assume the lead by 0.167s over Nick Cassidy.

With grip levels far higher on Sunday, a later move to a full power earned de Vries the fastest lap of the weekend as he clocked a 1m21.492s to end the session fastest by 0.141s.

DS Techeetah driver Vergne, who retired from the Saturday race after a collision with Alexander Sims at the attack mode joker lap exit point, snared the next best time to fend off one-lap specialist and Nissan e.dams driver Oliver Rowland by a 0.237s margin.

The Brit had set the pace in both Saturday practice runs before landing second on the grid, but a radio failure and a software issue contributed to an immediate drop to 14th before he and team-mate Sebastien Buemi were disqualified for not specifying their tyre allocation.

Envision Virgin Racing rookie Nick Cassidy ran to fourth quickest, having crashed out of the first Mexico race on the opening lap when he clouted the wall and buckled his front-left corner.

Jaguar Racing driver Mitch Evans provided one of few moments of drama in the session when he copped masses of oversteer through the difficult and blind Turn 7 and was forced over the grass as he applied the opposite lock.

He rounded out the top five times ahead of the two Venturi Racing machines, with Saturday podium finisher Edoardo Mortara edging team-mate Norman Nato by 0.05s. 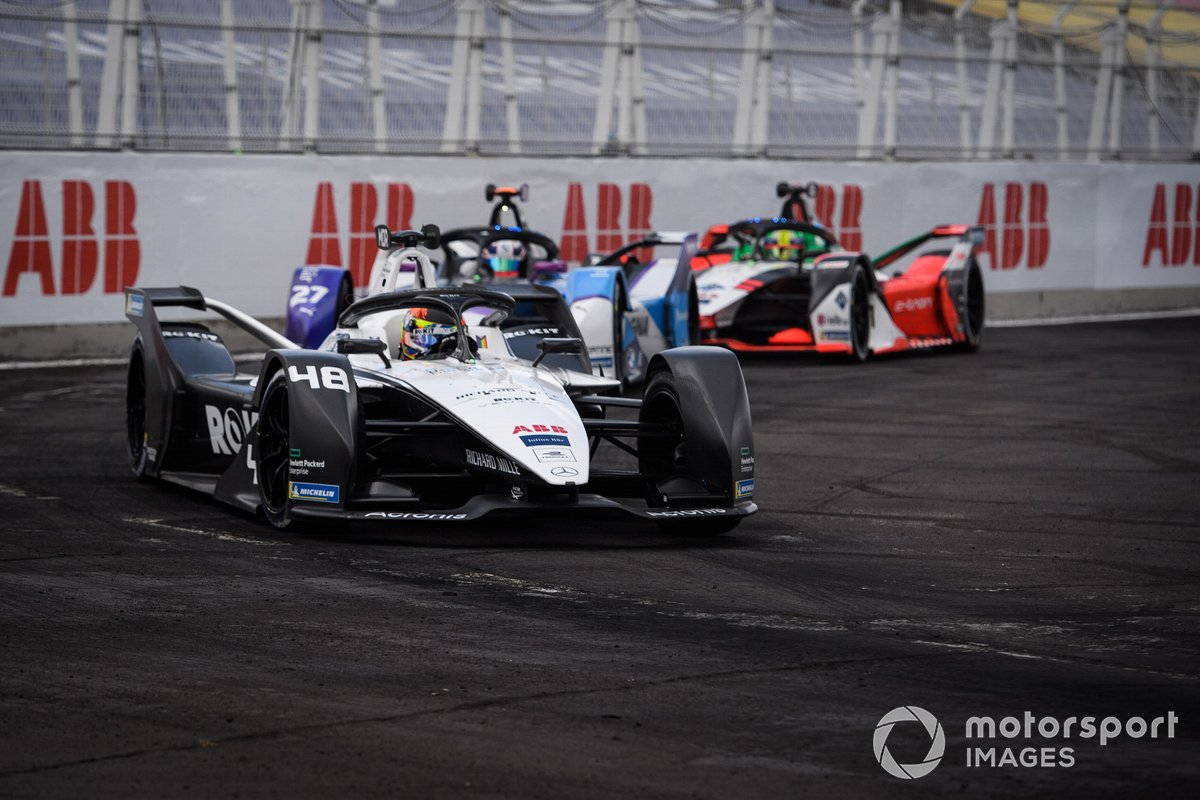 Maximilian Guenther scored eighth for BMW Andretti ahead of Saturday runner-up Rene Rast. The triple DTM champion was an earlier spinner in the session when he lost the rear at Turn 1 only eight minutes into proceedings.

But Rast shrewdly pinned the throttle aboard his Audi e-tron FE07 car as he rotated to light up the rear wheels and avoid continuing onto the wet grass and into the exit wall.

His team-mate Lucas di Grassi, who clocked his first victory in two years in the Puebla opener, was only 20th and behind long-time Formula E rival Buemi.

The championship big hitters only featured on the fringes of the top 10, with Stoffel Vandoorne making a mistake in the first sector of his full power run to earn 13th.

That eclipsed Saturday on-the-road victor Pascal Wehrlein, the Porsche driver losing his and the team’s first series victory due to the same tyre declaration error as Nissan e.dams.

Reigning champion and second in the points, Antonio Felix da Costa edged ahead of championship leader Robin Frijns in the run to 15th and 16th.