They held the lead after the safety car start before Rowland locked up and went into the Turn 3 barriers on lap one, gifting his team-mate the lead.

But Buemi then lost P1 after contact with eventual race winner Robin Frijns gave him a slow puncture and he dropped down the order, later getting a drivethrough penalty for pitlane speeding as he came in to get a new wheel.

"When you clinch a first row at this level - it was the first [all]-front row for Nissan - [there is] a lot of expectation.

"And we know that we have the pace, we have two good drivers. So, we are extremely disappointed.

"But this is the rollercoaster of motorsport. We have to accept and move forward."

Rowland said his early off was "a bit strange" as he "couldn't stop and get around the corner, so I was in the wall" after locking both of his front wheels.

He eventually finished 12th but was involved in a further incident where he sent Alexander Sims into the Turn 3 wall and will take a three-place grid penalty to the next FE race in Monaco as a result. 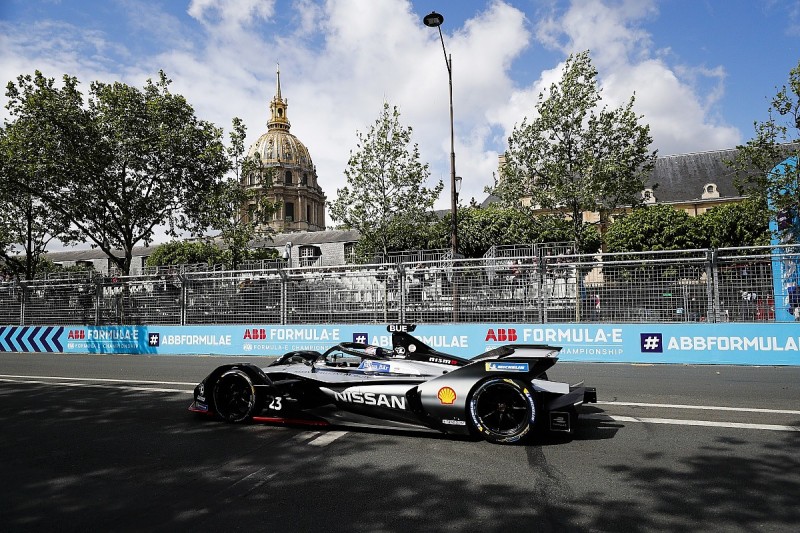 When asked if he felt his early off was influenced by a car issue - along the lines of Buemi's crash in Santiago - Rowland told Autosport that: "All I'll say is it's unlike me to do something like that in that position.

"It's difficult to understand at the moment so I have to go through everything properly. But at the moment I have to take it as just my mistake and I need to learn from it."

Sicard added that Nissan does not "want to blame Oliver".

"We are going to have a look at the data and see if there was anything," he continued.

Both Nissan drivers felt the Paris race was theirs to win before the issues occurred.

Buemi's incident with Frijns happened on lap seven as he entered the attack mode from a wide line after briefly locking-up at the preceding corner.

"[That happened] slowly, that's why I kept going for a few laps," he continued to Autosport.

"But I was going slower and slower until [I had to pit] because there was no more air in the tyre."

Buemi felt Frijns was "more to blame than me" but added: "I don't want to blame him at the end because it doesn't look too bad on TV.

"It's just hard to accept because I feel like that race was really for us."