Former Mahindra race driver Heidfeld - now a team advisor and its test and reserve driver - will drive the team's Gen2 car fitted with the M6Electro powertrain Mahindra will use next season at the annual hillclimb event.

Heidfeld will attempt to set a new FoS open-wheel electric record - which he currently holds with Mahindra's Gen1 chassis and its 2017/18 M4Electro powertrain - as well as the overall electric motor record.

That record is currently held by the Volkswagen I.D. R and was set by Romain Dumas at the 2018 FoS.

"I have been coming to the Goodwood Festival of Speed for as long as I can remember - at least 20 years as that's the anniversary of my first hillclimb record, which is just crazy!" said Heidfeld, who holds the outright hillclimb record at the FoS with the McLaren MP4/13 F1 car from 1999, pictured below.

"It's going to be interesting to see if my record is going to be broken this year because it was close in 2018, but I am back to challenge the open-wheel eRecord with the new Mahindra Racing Gen2 car.

"Goodwood Festival of Speed is very special to me because you see cars that you dream of and it has something to offer for all automotive enthusiasts; four wheels, two wheels, new and old cars - there is a lot of variations to see.

"It is great to see more support every year for electric mobility and the crowds never disappoint, so let's hope I can entertain them again." 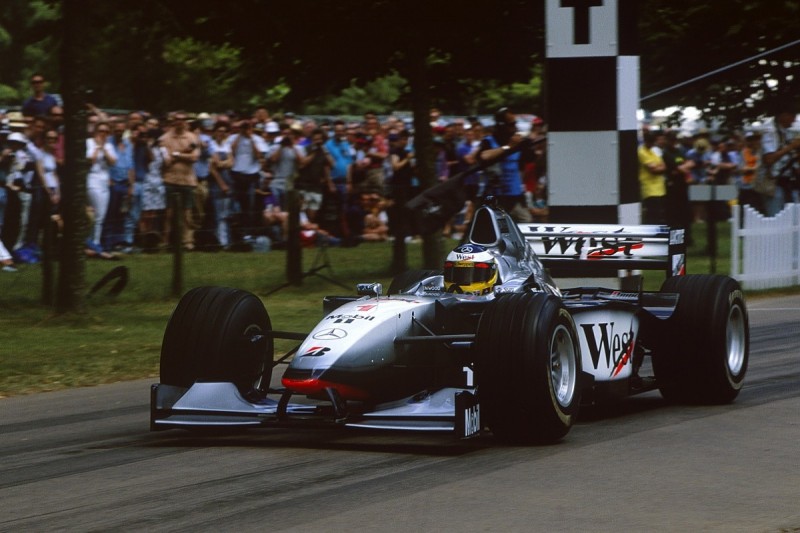 Goodwood organiser, the Duke of Richmond, said: "Nick's achievement on the Hill in 1999 was an electrifying performance, right on the edge.

"It still sends shivers down my spine when I watch it.

"For a very young driver who was eager to make his way in the sport, it's hard to imagine how important it was to make sure that his run was memorable for all the right reasons - and he delivered in consummate style.

"In the years that have followed, Nick has fulfilled that early potential in abundance in a distinguished F1 career, together with his many sports car racing successes and with Mahindra at the forefront in Formula E.

"It is fantastic that we now have the chance to look back on that run together and I look forward to seeing him, his record-breaking car from 20 years ago and the Mahindra Formula E Gen2 car at the Festival of Speed this weekend."