Lewis Hamilton revealed that he "jumped right at it" when the opportunity to start his X44 Extreme E team arose, but admits it still feels "strange" to be an owner

The six-time Formula 1 world champion's new squad was announced in September as the latest entrant in the all-electric off-road series, which aims to raise awareness of environmental issues by visiting damaged climates and effecting change.

X44 will aim to address the lack of diversity in motorsport - a key goal of his recently-launched Commission - in providing opportunities to minority backgrounds, although Hamilton admitted during a launch event on Tuesday that this is still in its early stages.

Explaining his decision to launch his own team, together with 1999 British Formula 3 champion and long-time advisor Marc Hynes, Hamilton said it fulfilled a lifelong dream and would provide a "positive impact".

"I've always wanted to have my own team, I just never knew when it would be," he said.
"When I heard about this, I jumped right at it just because of what the series means, what the series is going to do. It's going to be quite powerful.

"Each and every one of us can have a positive impact just by implementing small changes and that's really why I think Extreme E is so important, because it's going to keep people talking about the planet issue and inspiring us to take action.

"That's the great thing about Extreme E, it's not just going out to these great places, we're actually going to do something to make a change."

The X44 car livery will incorporate the prominent purple motif used on his racing helmet, with Hamilton involved in "collaborating" in its design. 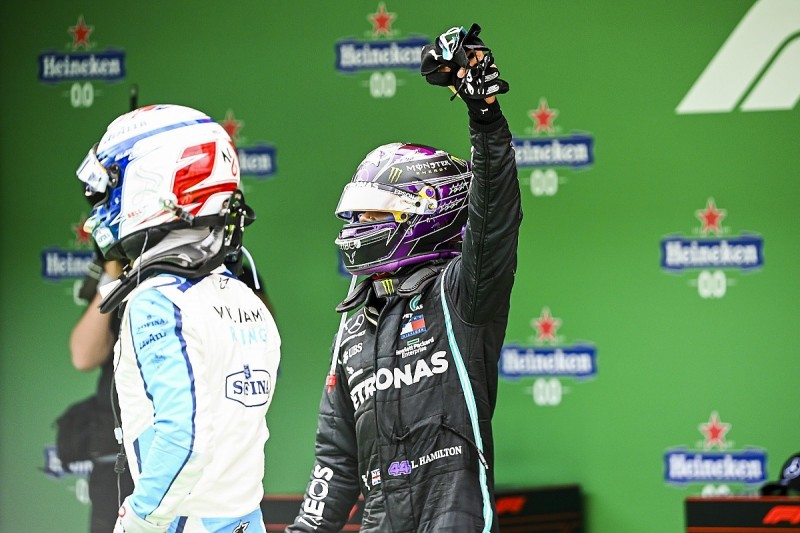 "This is just our first go at it, but I'm sure it will evolve," he said. "Naturally utilising the purple which has always been my favourite colour, bringing it from my race helmet that I've been using.

"And actually it's my team, it's very strange to be able to say that because I've been racing since I was eight years old, so 20-plus years and I could have only ever dreamed of having my own team."

Hamilton also said that he hopes the championship's "incredible" innovative emissions-free charging solution, having partnered with AFC Energy to use hydrogen fuel cell technology, will be adopted more widely in the future.

"The great thing is the new technology that we'll be using and pushing to be innovative," he said.

"Extreme E is also using the hydrogen fuel cell technology which is amazing, it's going to charge the race cars with a zero emissions energy source which is absolutely incredible.

"Hopefully it will start that ripple effect and hopefully other industries and the motor industry will start going in this direction more."