Maximilian Guenther set the fastest time of Formula E pre-season testing on a final day in Valencia in which the entire 24-car field was separated by less than 0.8 seconds

The BMW Andretti driver clocked a late 1m11.760s flying lap at the Circuit Ricardo Tormo to keep Sergio Sette Camara at bay by just 0.036s on an impressive day for Dragon Penske Autosport.

That meant for the second season in succession, Guenther ended the running quickest - his time this year was 3.2s quicker than in 2019 folllowing the removal of the main straight chicane.

In the warmest conditions of the three-day test, the top nine drivers all broke under the 1m12s barrier as teams switched to faster qualifying lap simulation runs.

However, this led to no fewer than seven drivers having to serve a 15-minute penalty in the pits as the new track limits imposed at Turns 1, 6 and 10 were repeatedly broken.

Behind Sette Camara, one such driver to be cautioned, his team-mate Nico Muller ran third fastest for Dragon, although he is yet to be confirmed at the team for the 2020-21 season.

Muller was just 0.050s off the pace in the 2019-20 car, with the American squad set to follow the lead of DS Techeetah and Nissan e.dams by introducing a new package for the Rome E-Prix in April. 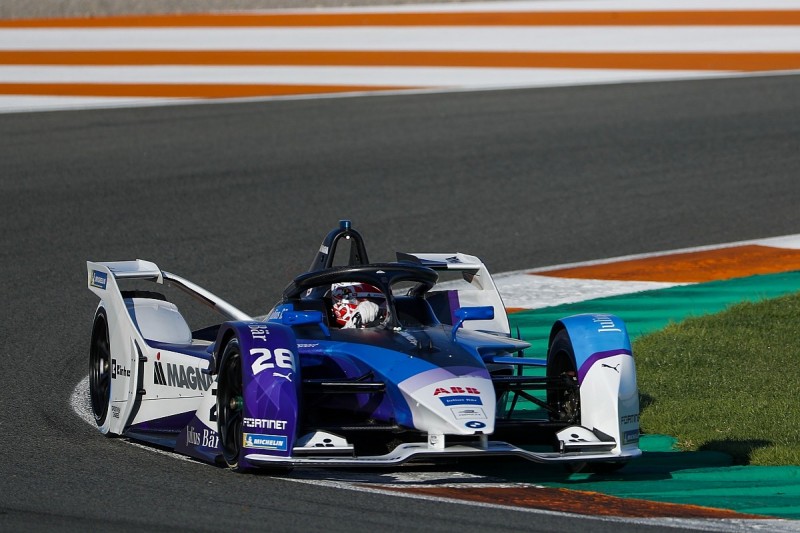 For much of the single six-hour session reigning champion Antonio Felix da Costa had led the field with his 1m11.815s benchmark, but no late improvements meant he dropped back to fourth.

In fifth place was Jaguar Racing's Mitch Evans, the Kiwi having been da Costa's nearest title rival throughout the early part of last season before the campaigned resumed for six races in Berlin.

Behind Evans, another casualty of the 15-minute reprimand, Porsche racer Pascal Wehrlein headed Oliver Rowland and the second DS Techeetah of Jean-Eric Vergne.

A strong effort from NIO 333 pilot Oliver Turvey guided the experienced Briton to ninth ahead of an impressive run from Venturi Racing recruit Norman Nato, set for his rookie FE season.

Fellow rookie Jake Dennis was 11th for BMW Andretti, still only 0.287s adrift of the top.

His team-mate Nyck de Vries ranked 21st as Audi driver Lucas di Grassi brought up the rear in 24th and last, but was only 0.761s away from Guenther.

Di Grassi has "no hard feelings" over Audi's FE exit