The British circuit has acted as the base for the 10 FE teams and the championship's operational headquarters since early 2014, while its proximity to East Midlands Airport is important for logistical partner DHL.

As part of that agreement it has also hosted collective tests for the electric single-seater series' first three seasons, with several of those days being made open to the public free of charge

It is mandatory for the teams to be based at the track until the summer of 2017, but while the series will continue to use Donington as a logistical base Autosport understands several teams intend to vacate their premises once the 2016/17 campaign is finished.

While many have not made a decision, Autosport understands Renault e.dams, Abt Audi Sport and DS Virgin Racing are committed to leaving.

Donington is regarded as an unrepresentative track for the street circuit-based championship to test at, but as all of the teams have been based there since the series' inception it has been the most logical option.

With the 10 teams due to be based in different locations from next summer, Autosport understands the championship is now discussing what other options there are for collective testing.

During their 15 days of private running many teams run at circuits like the Spanish Calafat and Guadix venues, but while they have more in common with the tracks FE will race on they are smaller and in more remote locations.

This makes it tougher to organise a test involving all 10 teams, with issues over the capacity to charge the cars and the quantity/availability of local hotels.

Autosport understands the preferred option is for the series to retain at least one collective test, so the FIA and its data partners can test their equipment, but scrapping an official pre-season event altogether is still an option. 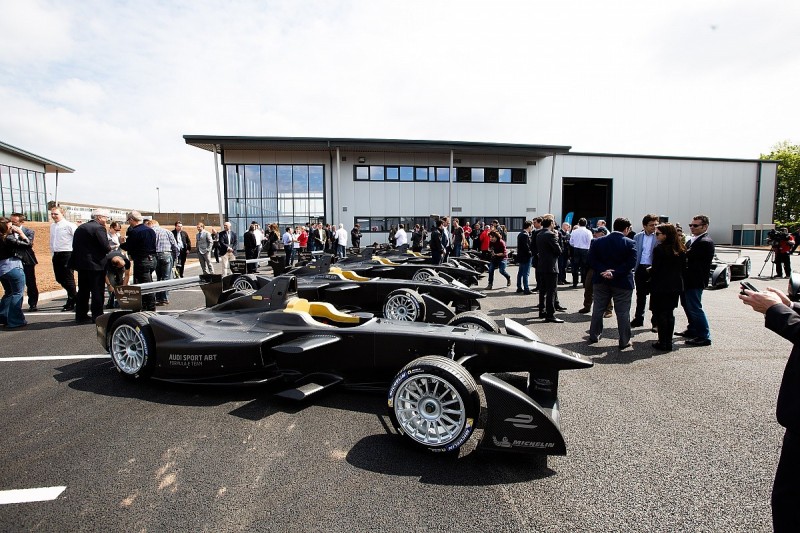 Donington managing director Christopher Tate told Autosport the circuit would remain an option for private testing for any of the teams.

"There's no reasons the teams that stay here can't band together and test here, or hire it themselves," he said.

"Or they can run on the heritage track - most of the teams have done shakedowns there."

He added that he hoped "four or five" teams would end up staying.

Donington is viewed by FE as one of its key founding partners, along with chassis supplier Spark Racing Technologies, battery supplier Williams Advanced Engineering and electronics supplier McLaren.

Tate described the relationship as "part of our revival from the dark days", when the circuit's previous leaseholder fell into administration after winning back Formula 1's British Grand Prix but failing to hold the race.

"There's absolutely no doubt that it showed we have," he said of the building complex that was built for FE and its teams to move into.

"It was absolutely crucial to our regeneration plans."