Rosenqvist topped the second session with a 1m35.467s lap, which put him 0.344s faster than Virgin Racing's Sam Bird.

After the pack had put in the early laps to get up to speed in FP2, Rosenqvist moved to the top of the times with a lap of 1m35.828s on his first 200kW effort - almost clipping the wall at the exit of Turn 12, which will form the start of the grid for the race, as he did so.

But Rosenqvist went faster still on his second 200kW lap and improved by almost 0.4s, with Bird slotting into second place shortly before the red flags came out when the Briton's team-mate - Alex Lynn - crashed for the second time across the two practice sessions.

Lynn caused a stoppage in FP1 when he slid into the barriers approaching the official Turn 1 - just past what will be used as the finish line, on the opposite side of the circuit to the start line.

In FP2, Lynn lost the rear of his car heading into the tight chicane at Turns 16/17 with five minutes of the 30-minute session remaining and hit the barrier with its right-hand side.

As he could not getting going again, the session was stopped and not restarted.

Jose Maria Lopez ended up fourth quickest ahead of Nico Prost and Sebastien Buemi, with Nelson Piquet seventh fastest in the combined standings across FP1 and FP2. 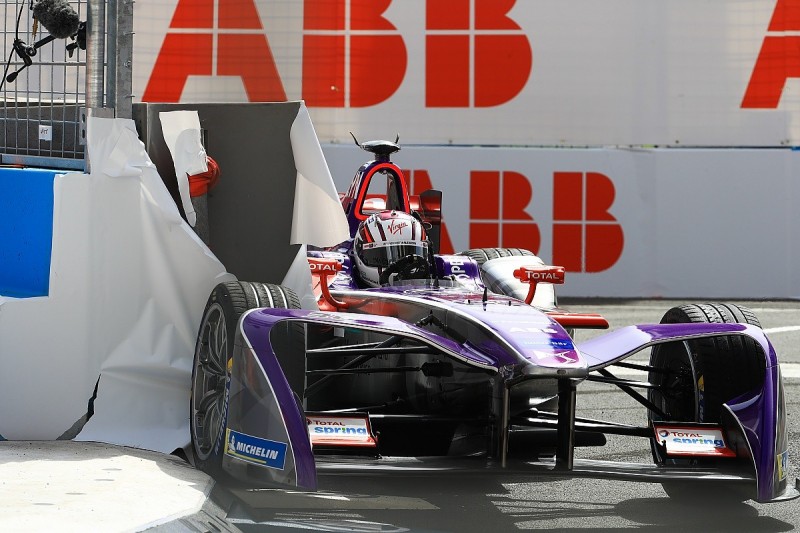 Piquet's lap of 1m36.134s was the fastest time in the 45-minute FP1, but the season one champion - who was given a suspended three-place grid penalty for completing more than the permitted six laps during Friday's shakedown - did not improve in second practice.

If Piquet commits the same infraction at any race for the remainder of the 2017/18 season, his penalty will then come into effect.

Jerome D'Ambrosio was eighth for Dragon as Mitch Evans (Jaguar) and championship leader Jean-Eric Vergne rounded out the combined top 10 - with the latter two 10th and 16th in the second session after failing to improve on their best efforts in FP1.

Techeetah driver Vergne had to twice take to the escape roads at the Circuito Cittadino Dell'EUR during first practice.

Lynn ended up 15th quickest overall, just ahead of triple Le Mans winner Andre Lotterer, who was the fourth and final driver not to go quicker in FP2.

Mexico race winner Daniel Abt ended up 17th for Audi, with Edoardo Mortara bringing up the rear of the field in the combined standings.