Vergne and Bird made it through to the superpole running despite having to run in the first group qualifying phase.

Bird held provisional pole following a smooth effort around the Circuit des Invalides on his superpole effort, but Vergne surged ahead in all three sectors during his own final flying lap.

Vergne was later fined €1000 for speeding in the pitlane during qualifying.

Andre Lotterer qualified third, 0.343s adrift of his Techeetah team-mate, after making it through to superpole despite appearing to clip the wall with the rear of his car as he went through the final corners of the track during the second group running.

Maro Engel qualified fourth for Venturi, which will be the best FE grid spot of his career so far, ahead of Andretti's Antonio Felix da Costa - who was second behind Vergne after the group running had been completed.

Da Costa ended up 1.661s slower than Vergne's superpole effort after losing time going wide at the exit of Turn 3, which will form the first corner in Saturday afternoon's race.

Reigning FE champion Lucas Di Grassi will start sixth after being pushed out of superpole by Engel's lap-gasp improvement in the final segment of the group qualifying phase.

Di Grassi, who is yet to win a race this season, missed out on superpole by just 0.005s. 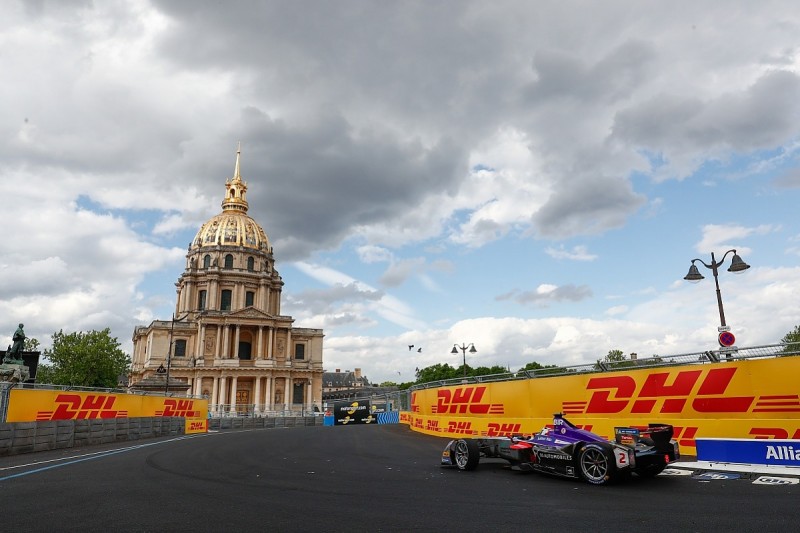 Jerome D'Ambrosio qualified seventh for Dragon Racing after finishing his lap in the fourth qualifying group with two strong final sectors, which put him front of Renault e.dams driver Sebastien Buemi - also searching for his first win of the current season - by just 0.001s.

Oliver Turvey ended up ninth for NIO, with Jose Maria Lopez, who was later hit with an €800 fine for the same infraction as Vergne, rounding out the top 10 for Dragon.

Felix Rosenqvist, who has qualified on pole in two of the previous three rounds and is third in the drivers' standings, could only set the 11th quickest time as he struggled for grip early on during his flying lap in the first group running.

Jaguar driver Mitch Evans qualified 14th fastest, but he will drop to the rear of the grid thanks to the 10-place grid drop he was handed for taking a new gearbox ahead of the Paris event.

As he cannot drop the full 10 places, Evans will have to serve a five-second time penalty at his car swap in the race.

Edoardo Mortara had qualified in 18th, but he will start 19th after being hit with a three-place grid penalty for speeding under the red flag in FP2.

Mortara "admitted he was not aware he had to slow down to 50km/h, which never can be an excuse," according to an FIA bulletin.

Nelson Piquet Jr will start in front of Evans and Mortara, despite not taking part in qualifying after crashing in both practice sessions.

The car Piquet used in FP1 is being rebuilt around a new tub, but his FP2 shunt caused enough damage to the car his was set to use in qualifying that it meant he had to sit out the grid-setting session.