The FIA has asked all Formula E teams to review the causes and effects of possible failures to their braking system following the Diriyah E-Prix crash that hospitalised Edoardo Mortara.

As a result, both Mercedes and the cars of customer team Venturi Racing were not allowed to compete in qualifying but were later cleared to start the Sunday night race.

Ahead of the Rome E-Prix double-header, the FIA has asked all teams to check the failure mode and effects analysis (FMEA) of their braking system.

Manufacturers must submit a list that considers all scenarios relating to an issue in order to homologate their car.

In Mortara’s crash, the brake pedal was fully depressed, but the front brakes were recorded at zero pressure which was likely the result of a possible leak.

The statement continued: “In the chassis supplier common package, [teams] have the displacement travel sensor from the tandem brake master cylinder.

“Those sensors must be used to detect any leakage on the brake system.” 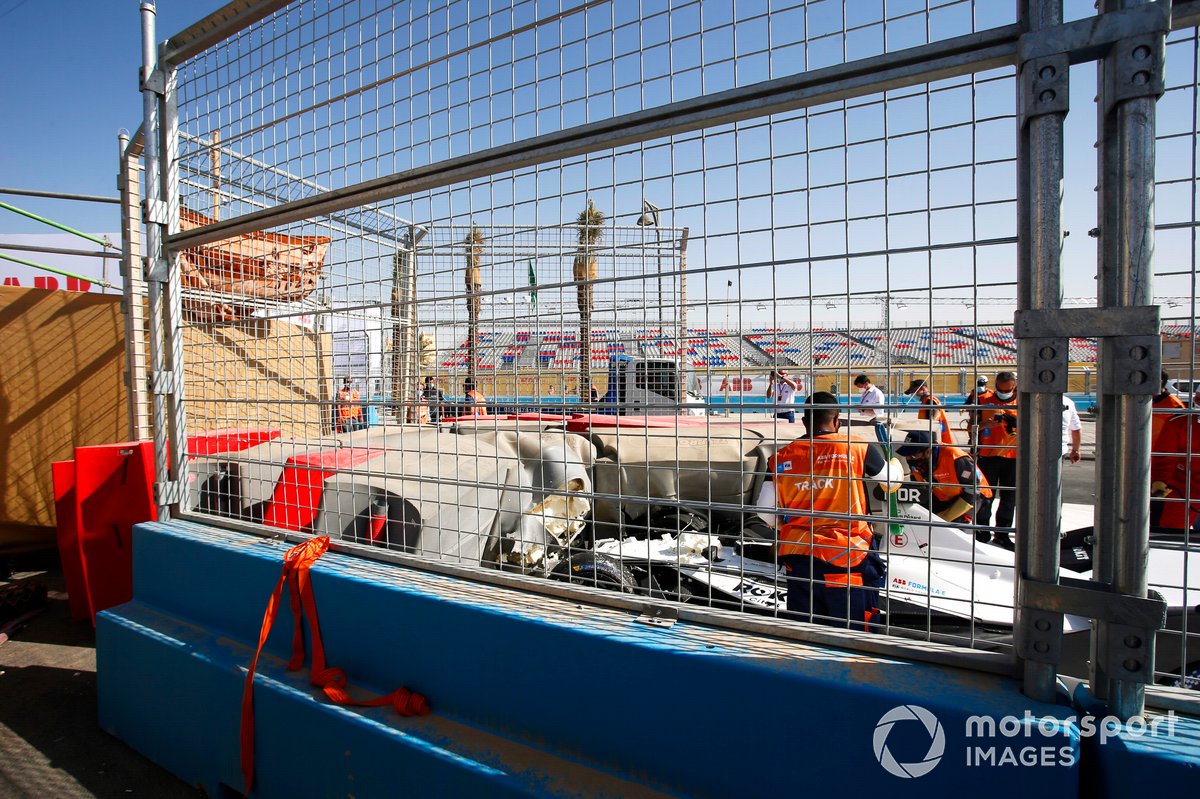 Marshals remove the car of Edoardo Mortara, Venturi Racing, Silver Arrow 02, from a barrier after his crash

The FIA clarified that the root cause of the Mortara shunt had not yet been fully identified but “for the time being there is no concern on the chassis common parts”.

This suggests Mortara's crash was an isolated incident, despite Mercedes works driver Nyck de Vries appearing to suffer a similar issue that caused him to retire from the Mexico City race last season.

The FIA has also suggested teams run with a paddle that drivers can activate to slow the car in the event of a brake pedal issue. Most teams run with such a set-up already.

DS Performance director Thomas Chevaucher, who replaces FIA-bound incumbent Xavier Mastelan-Pinon, told Autosport: “In addition of that failure mode analysis (FMEA), the FIA recommend going in a mode so that the drivers can slow down the car using a paddle.

“In the case of a very severe multi failure on the braking system, the driver has an opportunity to slow down the car using the regen paddle.

“This, I would say, is an extra safety compared to a normal [internal combustion engine] car.

“We have the motor that can slow down the car if the brakes cannot for some reason.”

Porsche driver Andre Lotterer stopped on track in Rome with a minute of shakedown remaining due to a brake-by-wire issue.