Nasr picked up extensive damage on the first lap of the race after colliding with his Dragon Racing team-mate Jose Maria Lopez, and multiple instances of further contact caused his front wing to go under the floor of his car.

The damage caused Nasr's car to smoke heavily until he crashed on the second lap, when he went straight on into the barriers at the 90-degree Turn 2 right-hander.

The smoke from Nasr's car and angle of Turn 2 meant an unaware Pascal Wehrlein hit the rear of the stricken Dragon, with D'Ambrosio also collected in the accident - forcing all three to retire on the spot.

D'Ambrosio, who lost the championship lead to Envision Virgin Racing's Sam Bird in Hong Kong, told Autosport: "Felipe just stayed out with his damaged car and it failed in Turn 2.

"I don't understand why he didn't stop or pit to be honest with you. I was behind, Pascal was behind.

"It was [a lack of] visibility and the car [Nasr's] failed.

"I definitely think he should have a penalty. You should be penalised for these sort of things, you can't encourage people to keep on racing with a car they know will fail as it's creating an accident."

When D'Ambrosio's comments were put to Nasr, he said: "What can I do? Those things are unexpected.

"It [the front wing] breaks and goes under the car, that's it. It could happen to anyone.

"The teams overlook [and monitor], if there's an unsafe situation they call you and tell you to slow and bring the car in. They can see it from the TV." 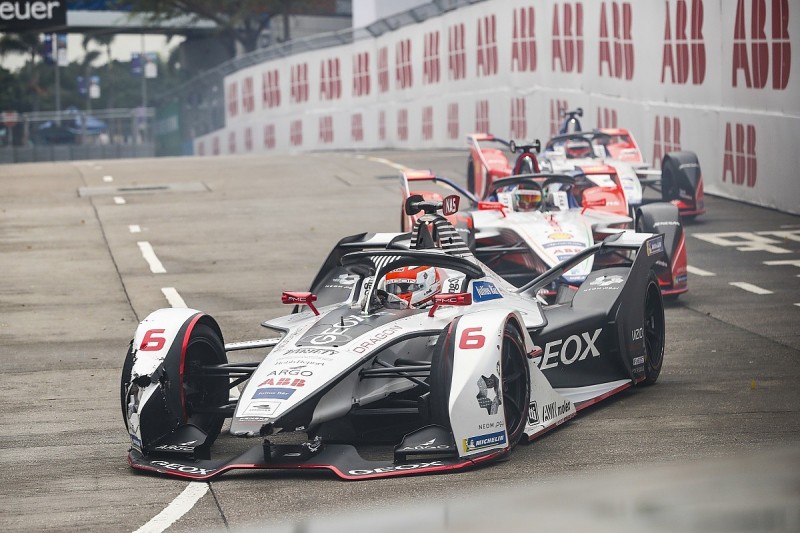 Wehrlein also explained how he became involved in the collision.

"That corner is so tight, so you don't know if someone is stuck in the barrier," he said.

"There was no way to stop for me or to go around. Just couldn't do anything to avoid it.

"I kept a one-second gap or something around that because he [Nasr] was driving one-and-a-half laps [damaged] like that already, which is a bit weird because it was clear passing the pit once that he would not finish the race like that.

"We had a gap of one second but you can't slow the car down to zero in that second because the corners are so tight.

"We saw in many places that as soon as a car gets stuck or is in the barriers, everyone has to stop because you can't go around [an incident]."