Prior to the fifth race of the season in Marrakech - which preceded the 158-day coronavirus hiatus - da Costa's best qualifying result had been fifth in the second Saudi Arabia E-Prix.

This followed his 21st grid spot for the first race of the season, before he was 10th in Santiago qualifying and ninth in Mexico City - which he blamed on a lack of confidence in the new car.

But the Portuguese driver scored his third consecutive FE pole for the second Berlin E-Prix on the reversed Tempelhof Airport circuit on Thursday morning by 0.417 second over Sebastien Buemi.

Da Costa told Autosport that his one-lap form had been delayed by a contract clause, which meant he could not join DS Techeetah until the eve of pre-season testing in October.

"When I jumped in here [at DS Techeetah], I was blocked contractually to start working with this team until October last year," da Costa said.

"It was all very rushed into the first race.

"I could see the speed potential and we were passing in the races but the qualifyings I wasn't quite under control with a car.

"Already in Marrakech we put it on pole. It's three in a row now, which is still surreal to say that."

Da Costa ended the 2018-19 campaign in sixth for BMW Andretti, before his move to DS Techeetah was set up by current team-mate Jean-Eric Vergne.

After the three bonus points for topping qualifying in Berlin, he now moves 44 clear of nearest title rival and Jaguar driver Mitch Evans. 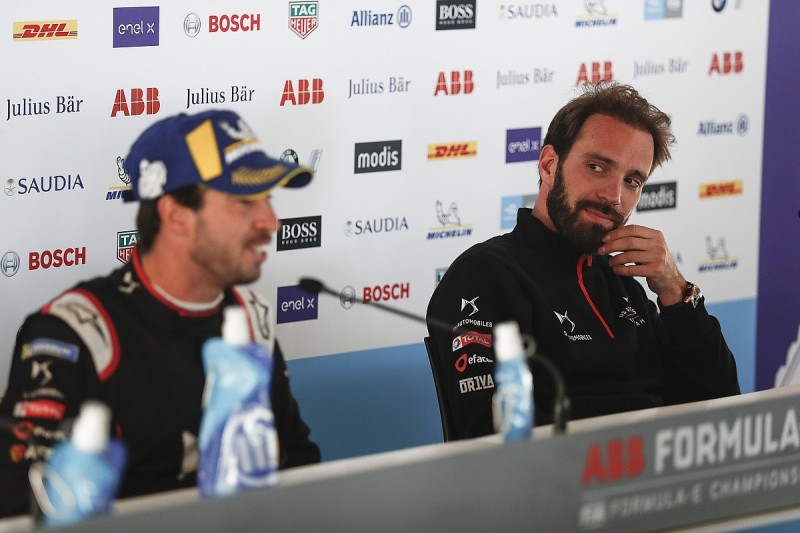 Vergne had criticised da Costa over team radio during the Wednesday Berlin event for ignoring a pre-agreed team protocol to conserve energy in the first part of the race.

Da Costa defended his early performance, however, saying he had to maintain speed to stop Vergne from passing.

"I was just trying to do the fastest race possible," he told Autosport.

"You can argue that you don't need a 7s gap in Formula E, you don't have any sort of pitstops or strategic things that might come into play.

"It's only using energy for nothing really.

"But I still had [Vergne] to worry about, he was only like 1.5s behind.

"If I fall asleep, he's going to come so I was trying to race him."

Da Costa added that, although the team had discussed a strategy for the race, the scenario to conserve energy did not transpire.

"We looked at a certain amount of scenarios to see how the race would pan out," he told Autosport.

"But in the end, I got told on the radio that none of those scenarios would come into play and we were free to race and so I did.

"I don't know if [Vergne] expected something else. But that's not really my problem."