The Amlin Aguri racer took the win on an afternoon where the hot ambient conditions were matched by the temperature of the contest over the second half of the race.

For the first 15 laps it had been a relatively processional affair, with Sebastien Buemi leading Lucas di Grassi and Nick Heidfeld.

But with Karun Chandhok's trip into the Turn 10 wall right before the car swap - a crash that was sparked by a rear suspension failure - the entire flavour of the race changed and leading became a bad luck omen.

Barely had the Chandhok debris been swept up and the safety car been recalled when Buemi slammed into the wall at exactly the same place, ending what was shaping up to be a dominant weekend for the e.dams driver and handing the initiative to di Grassi.

His time in the hot seat lasted exactly two laps before he became the next victim of the same piece of barrier, following a suspension breakage, and moved Heidfeld into first place. 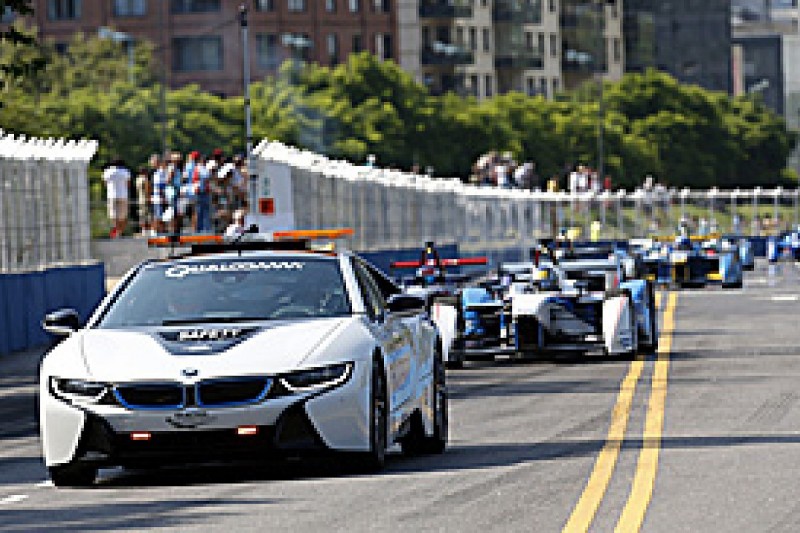 Heidfeld's first task as leader was to remain clear of Sam Bird, who was doing all he could to rattle the German's cage before veering into the pitlane to serve a drive-through for ignoring a red light at the pit exit.

Bird rejoined back in 12th, and left Heidfeld to concentrate on trying to open a gap over da Costa and Jean-Eric Vergne - a task that kept him busy for six laps before he, too, was issued a drive-through, this time for pitlane speeding.

That handed da Costa the lead with just one lap to go, and a chaotic multi-car battle for the minor podium places meant that P1 was the safest place to be: Jaime Alguersuari, Vergne and Daniel Abt were all hip-checked out of potential top three places over the final couple of laps, opening the door for Nicolas Prost - who had been nowhere just a few laps earlier - to claim second.

Completing the top three was Nelson Piquet, whose afternoon was mostly spent recovering from a miscommunication with his team that left him pitting a lap later than he would have liked to when the safety car came out.

Alguersuari and Bruno Senna completed the top five ahead of Vergne and Bird, whose recovery to seventh was capped off with the fastest lap of the race.