The Swiss driver set the best time in the first and third sectors on his flying lap in superpole, recovering from an average middle segment by flying from the final corner - the long Turn 10 hairpin - to set a best time of 1m07.295s.

Vandoorne, who topped the group qualifying part of the session for HWA, nearly matched Buemi in sector one despite a side at the long near-circular Turn 1.

He remained in contention for pole until the final corner, where carrying too much speed on entry and then a big kick from the rear as he accelerated out of the turn cost him against Buemi. 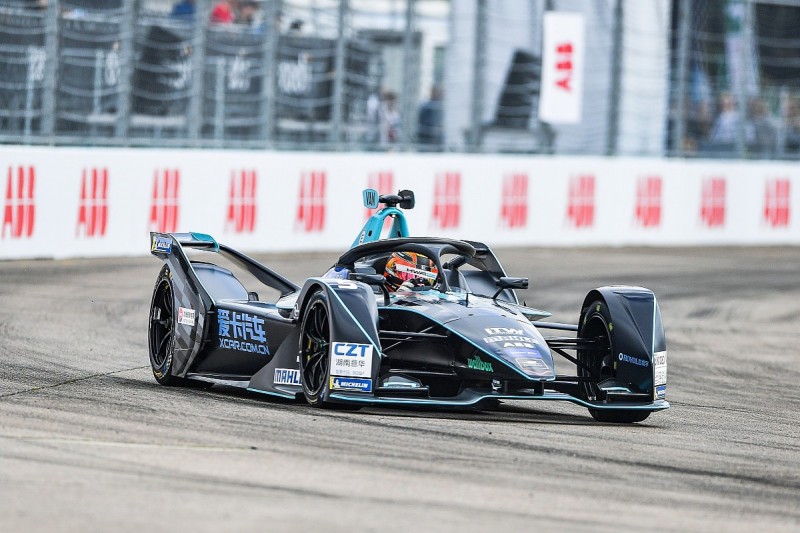 Lucas di Grassi - the only driver to make it out of the first group in qualifying despite fearing that the unique timetable at the Berlin event would cost those runners - finished third for Audi.

He also had a big slide at Turn 1 but recovered through the lap and ended up ahead of Gary Paffett (HWA), Jaguar's Alex Lynn and BMW Andretti driver Alexander Sims, who will drop five places on the grid due to his penalty for clashing with di Grassi in Monaco.

Daniel Abt was knocked out of superpole contention at the last moment by Paffett's late group four effort, and he survived an investigation for a suspected breach of article 33.2 of FE's sporting regulations, which states that teams must not work on their cars beyond "temperature management" from five minutes before the start of qualifying.

The stewards took no further action as the Audi team manager explained that a mechanic who was spotted near the front of Abt's car was checking his right-front tyre pressure with "a wireless instrument", according an official FIA bulletin.

A scrutineer judge in the Audi garage confirmed that the mechanic did not touch the car, so Abt keeps what will become sixth when Sims's penalty is applied.

Jerome D'Ambrosio rounded out the top 10 ahead of his Mahindra Racing team-mate Pascal Wehrlein, before Sims's demotion elevated both.

Group two runners Oliver Rowland and Sam Bird took 12th and 13th, while Edoardo Mortara could not replicate his high practice placings - he finished second in both Friday sessions - as he finished down in 16th for Venturi.

Mortara's team-mate Felipe Massa clipped the walls twice at Turn 6 - where attack mode is located for the race - and the following fast left of Turn 7 on his way to 19th from group three.

Robin Frijns and Andre Lotterer took the final two positions, with the former hindered by a wheelspin sensor issue on his group one lap.

Lotterer, second in the standings by just one point, did not get to set a time in group one as he missed the cut by a split second at the end of his second warm-up lap when following di Grassi and Vergne.

Lotterer will start ahead of Frijns as the Envision Virgin Racing driver also has a five-place grid penalty carried over from Monaco.