McLaren-Honda Formula 1 protege Lando Norris was supreme in the final race of the Formula 3 European Championship round at Zandvoort, producing his second lights-to-flag win of the weekend

The Briton beat his Carlin Dallara-Volkswagen team-mate Ferdinand Habsburg to secure his seventh win of the season, as title rival Maximilian Gunther lost ground in the championship fight.

Norris led Habsburg all the way, building up a six-second advantage in the first half of the race.

Habsburg then stabilised the gap, and slashed half a second from Norris's lead with seven laps remaining when the 17-year-old had a wild slide on gravel deposited at the Turn 11/12 chicane the previous lap by race two winner Callum Ilott.

The interval continued to vary only slightly over the final laps, before the Austrian "tried to take Turn 7 [Scheivlak] flat on the last lap, to prove I have the biggest balls, and I nearly crashed!"

Habsburg lost a second in the process, so finished 6.646s adrift.

"I had a good start, and I didn't need to defend into Turn 1," said Norris.

"I was able to keep extending the lead, but then the track conditions changed three-quarters of the way through the race and I was never quite as fast for the rest of it." 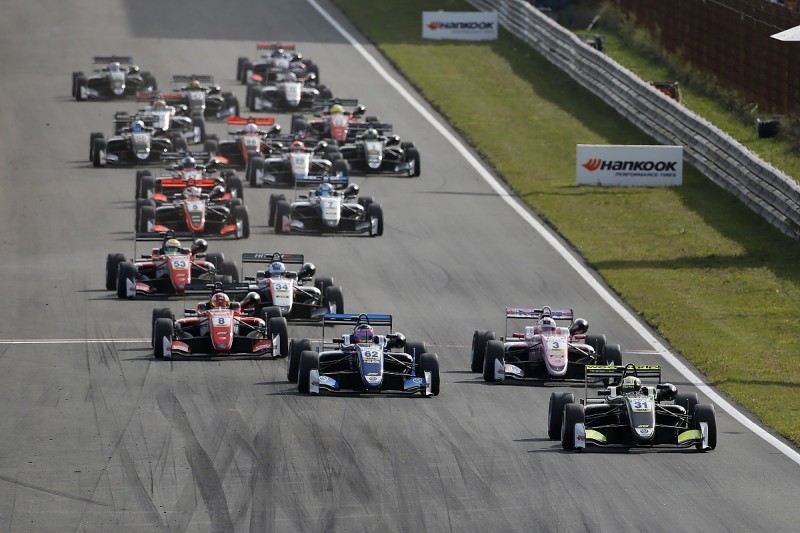 Habsburg was kept on his toes for much of the race by Gunther, who led Prema Powerteam stablemates Guan Yu Zhou and Ilott, who had risen up from seventh on the grid until he was forced into the pits to replace a loose front wing.

Gunther's challenge finally ended when, like Norris, he and Zhou also had dramatic slides on the gravel on the track at the chicane.

The result means that pre-weekend series leader Gunther now trails Norris by 11 points in the championship.

Jake Hughes finished fifth, over half a minute behind the victorious Norris and proving the cork in the bottle of a 10-car train.

The Hitech GP driver had damage to his left-front-wing endplate, but somehow managed to keep Van Amersfoort Racing's Pedro Piquet behind him.

Piquet in turn had team-mate Harrison Newey on his tail, while behind them Ralf Aron prevailed in an entertaining all-Hitech scrap for eighth with Nikita Mazepin.

Time and again Mazepin would run side by side with Aron on the outside of Tarzanbocht, until an opportunistic Joey Mawson (VAR) got ahead of him.

Mazepin then had to try to repass Mawson, which he failed to do but at least claimed the weekend's final point.

Joel Eriksson fell further behind in the championship battle, although he managed to get the better of his Motopark team-mate David Beckmann in a fight for 12th, behind Mick Schumacher.