Schumacher and his Prema Powerteam Dallara-Mercedes got the jump on the polesitting Motopark Dallara-Volkswagen of Fabio Scherer at the start, and from then on he controlled the race to the finish.

Schumacher's quest was aided when Juri Vips tried to sneak down the inside of Scherer to snatch second at Abbey, the first turn, only for the Motopark duo to make contact before continuing.

By the end of lap one Schumacher had a 1.4-second advantage, but Scherer never allowed it to rise beyond 2s, and the Swiss in turn began to come under pressure once again from Vips.

After numerous glances at second place, Vips made his move count on the 12th lap of what would be a 19-lap race, sweeping around the outside of Scherer on the approach to Stowe.

He then chipped away at the gap to Schumacher, but the leader held firm.

"After race one we were a bit scared the tyres might not hold on," said Schumacher in reference to Prema's trio of punctures in the morning encounter, "but they did so we were really happy.

"I had a good start and got a good gap, which I could manage to control.

"Midway through the guys were coming closer, so I started pushing again and got a good gap again." 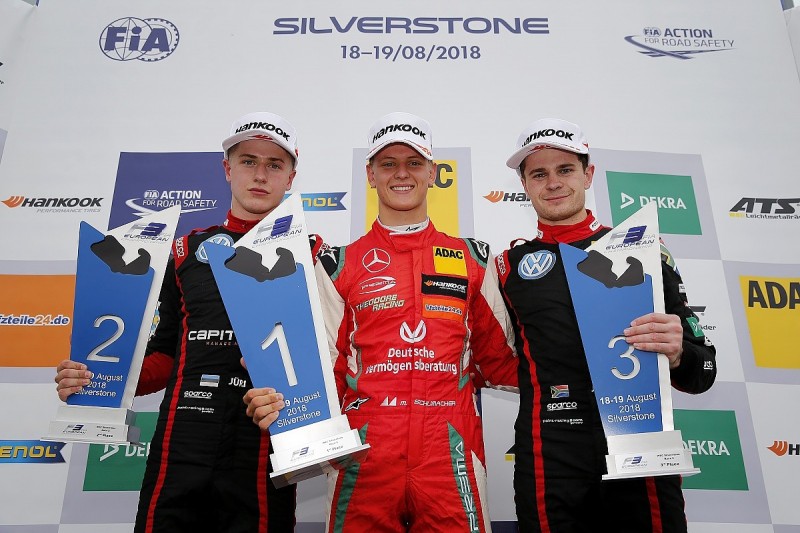 Vips reckoned he could have had a chance to challenge for the win had it not been for the first-corner contact, but acknowledged "good job to him" to Schumacher for his win.

Scherer lasted only four laps in third place before he pulled off at Chapel Curve with a problem that, at present, the Motopark team can only narrow down to engine or electrics.

That promoted another Motopark driver, Jonathan Aberdein, to third place - the first F3 podium for the South African series rookie.

Aberdein came under pressure early on from Prema-run title contender Marcus Armstrong, but the New Zealander was then passed by Enaam Ahmed, who continued his good day with fourth place for Hitech GP ahead of Prema pair Armstrong and Guan Yu Zhou.

Attention focused on Dan Ticktum, who lost ground at the start and dropped from eighth on the grid to 12th.

Motopark-run championship leader Ticktum made little progress early on, but passed Alex Palou, Ralf Aron, Robert Shwartzman and Sacha Fenestraz on his rise to seventh on the road.

Aron's front end made contact with Ticktum's rear as the Briton passed at Club, while the Fenestraz move came into Club after both had run off track at Stowe - both incidents were put under investigation and a 1.5s time penalty for Ticktum later put him back to eighth behind Fenestraz.