A heavy shower of rain as DTM free practice finished meant the track was soaking wet when the first group of F3 cars took to the track.

With the field divided into two groups for qualifying, due to the brevity of the circuit, the post-rain sunshine meant that the second batch would always be quicker.

So although McLaren Autosport BRDC Award winner Dan Ticktum dominated the first group, he had no chance of qualifying on pole position - not only because of the drying track, but because he is carrying a three-place grid penalty.

New Zealander Armstrong and his Prema Powerteam Dallara-Mercedes lurked down the times for much of the session until he began to push noticeably harder with a few minutes remaining, emerging from a late scrap with Jehan Daruvala to claim pole by 0.095 seconds.

"It sounds strange but I was almost saving my energy," said Armstrong.

"Being P1 for 20 minutes is almost too much, and I knew it would get quicker, so I didn't bust my balls too much for the first 15 minutes.

"It was quite tactical - in the first group I saw our guys [Prema team-mates Ralf Aron and Robert Shwartzman] up there, and then dropped off towards the end.

"I just decided, 'Now to go', and I did three laps virtually the same."

Red Bull junior Ticktum also set three laps quicker than the best anyone else could manage in his group, but instead of starting second his Motopark Dallara-Volkswagen will line up fifth.

That's because he ran a red light at the end of free practice - an official was pointing at the red light with one hand, but was shaking his other hand, and Ticktum thought that meant he was being waved through.

A similar fate befell Mick Schumacher, Ferdinand Habsburg, and Van Amersfoort Racing's Artem Petrov, which means the World Cup isn't the only sporting event on at the moment to feature a VAR penalty. 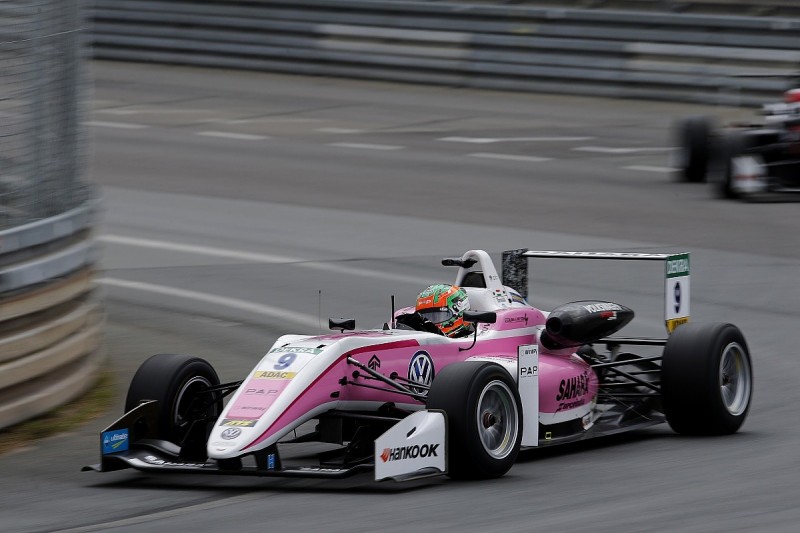 Ticktum's penalty means that Daruvala, second in the faster group in his Carlin car, moves up onto the front row.

Aron, who trailed Ticktum by 0.218s in the wetter group, will start third, while Schumacher - who was fastest for much of the drier session before dropping to third late on - would have moved up to fourth to form an all-Prema second row.

Instead, Ticktum's Motopark team-mate Jonathan Aberdein moves up to fourth.

That represented a big step forward for the South African, and likewise Carlin's Russian Nikita Troitskiy, who will line up sixth, with Motopark's Juri Vips and the penalised Schumacher on the fourth row.

The fifth row will feature Shwartzman and Sacha Fenestraz (Carlin), with Habsburg's penalty dropping him from ninth to 12th.

It was a terrible session for the top two in the championship, both of whom will line up on the seventh row.

Points leader Enaam Ahmed was seventh in the wetter group, although he is comfortably ahead of his Hitech GP team-mates after a session that was a struggle for the Silverstone squad.

Second in the championship Guan Yu Zhou was top of the drier group for a while, before the Ferrari junior faded in his Prema car.