Tom Blomqvist dominated the second Formula 3 European Championship race at Imola to keep his title hopes alive, as Max Verstappen put in a sensational charge from 11th to second

Blomqvist beat championship leader Esteban Ocon, who was second on the grid, away from the line and built up a huge advantage over fellow Jagonya Ayam with Carlin runner Antonio Giovinazzi, who passed Ocon into the first corner to take second.

The safety car, caused by a crash for Alexander Toril at Piratella, eradicated Blomqvist's advantage, but he made a good restart and was never threatened thereafter.

Verstappen was up to sixth by the time the safety car appeared after seven laps.

Straight after the restart, he passed Nicholas Latifi for fifth into Tamburello.
He then hunted down Ocon - who had fallen behind Prema Powerteam stablemate Antonio Fuoco - and swept around the outside of the Lotus F1 junior at Tamburello to claim fourth.

Just after this, Fuoco came into the pits for a rear-wheel change, and the Italian made two further pitstops before the finish - now Verstappen was third with seven laps remaining.

By the final two laps the Van Amersfoort Racing car was right on the tail of Giovinazzi.

"I made a little mistake on the penultimate lap, but I was really pushing," said Verstappen.

"Antonio did a good defence at the end of the straight [into Tamburello] on the final lap, and it was difficult to stay close behind him in the middle sector. But at the last corner he ran a little bit wide, touched the green bit on the outside and got some wheelspin.

"I think there was a bit of confusion with where the finish line was but I just kept it flat." 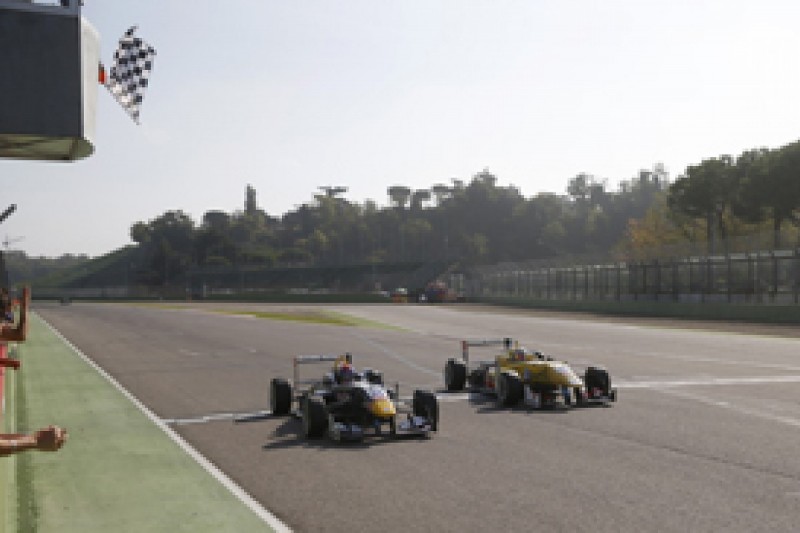 Verstappen snatched second by 0.019 seconds (pictured), although Giovinazzi denied that he had mistakenly backed off before the flag, instead pointing out the straightline speed advantage the VAR car has had all week.

Ocon finished fourth, and is 84 points in front of Blomqvist going into Sunday's third race, and 96 ahead of Verstappen.

Verstappen starts this one from pole, with Ocon second and Blomqvist fourth.

If Verstappen wins, Ocon only has to finish in the top seven to be crowned champion; if Blomqvist wins, Ocon needs to be second.

Lucas Auer pulled off a spectacular outside move at Tamburello on Latifi with four laps remaining to take fifth, while Jake Dennis, Felix Serralles, Felix Rosenqvist and Gustavo Menezes completed the points scorers.

Will Buller was running comfortably in the top 10 before his Signature Dallara retired to the pits with a clutch problem.