Ilott wrested the top spot away on the final lap with a superb effort in his Prema Powerteam Dallara-Mercedes, to beat Carlin-run McLaren Formula 1 protege Norris by 0.161 seconds.

With Maximilian Gunther, Norris's only title challenger, qualifying a distant 12th, that means Norris is almost certain to be confirmed as champion in the first race of the weekend, which Gunther needs to win with Norris outside the top eight if the title is going to remain open.

Ilott was on top as the session entered the closing stages with a 1m31.827s, but Norris lowered the benchmark to 1m31.805s on the penultimate lap.

The response to a 1m31.646s was immediate from Ilott, while Norris - running later on the track - ran wide at the fast right-hander entering the final stadium section on a lap that he said was a tenth up on his own previous best at the time, but wouldn't necessarily have beaten Ilott's effort.

"I was looking at the times on the scoreboard, and I thought, 'That's good', but I knew there was more to come," said Ilott, who also headed free practice.

"Then the last lap I just put it together and it was good - at the moment it's working well."

"We made a slight improvement to the car compared to practice, but the track changed a bit [with the rubber from Carrera Cup free practice] and that took us a bit by surprise," said Norris.

"It's OK but could be better - we'll have to find a bit if I can consistently attack him."

Joel Eriksson, who along with Ilott could jump Gunther for the championship runner-up position, placed his Motopark car third on the grid with a last-lap effort. 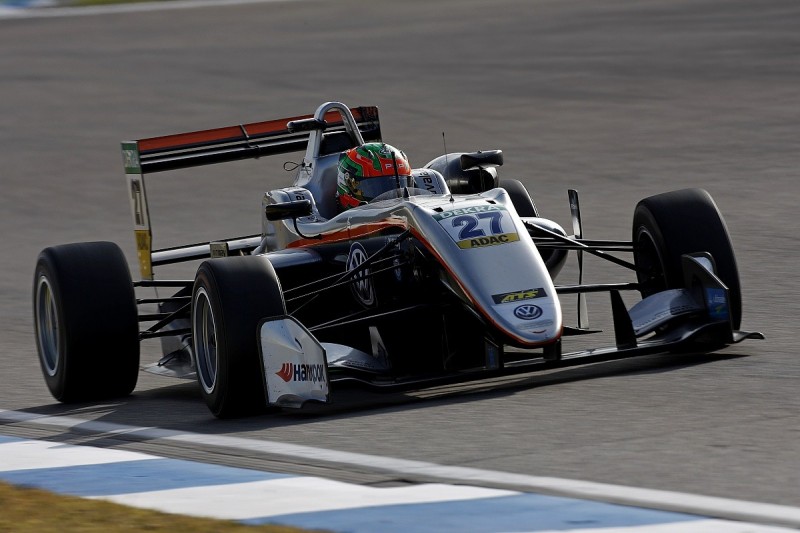 Next up were Force India Formula 1 junior Jehan Daruvala and Ferdinand Habsburg, the Carlin duo showing good form and Habsburg putting in his best effort on his final lap.

Once again Honda protege Tadasuke Makino impressed to be the top Hitech GP runner - the Japanese set a purple time in the lengthy middle sector with a couple of laps to go and he too posted his best overall effort on the final lap.

Pedro Piquet showed one of his spasmodic flashes of good form to lead the Van Amersfoort Racing charge in seventh, ahead of the Hitech machine of Jake Hughes.

The gloomy Gunther didn't have any real explanation for his ill-timed loss of form after qualifying.

"I don't know if there is a problem - it felt OK but for sure not as I normally feel," he said.