His lead was as high as seven and a half seconds as he looked comfortable on a wet Monza circuit with standing water dotted around the track.

Beckmann had the measure of ART Grand Prix's Anthoine Hubert, who extended his championship lead once again.

In a dramatic start, standing water at the first corner caught out Hubert, Juan Manuel Correa, Tatiana Calderon and Simo Laaksonen, all of whom used the escape road.

At the Roggia chicane, Correa spun from fourth and Calderon yielded to ART drivers Callum Ilott and the charging Nikita Mazepin, up into the top five from 11th on the grid after an unbelievable dive into the first chicane where visibility was a only a few metres.

On lap three of the 22, Ilott locked up heading into the Rettifilo chicane, and so did Mazepin just behind. Both cut the corner but Mazepin passed Ilott entering the slip road which appeared dubious.

The stewards showed no signs of investigating the incident during the race.

Ilott remained on Mazepin's tail until lap 12 when Mazepin touched the inside curb at the Roggia chicane and ran wide, touching the gravel on the exit as Ilott moved past in the process. 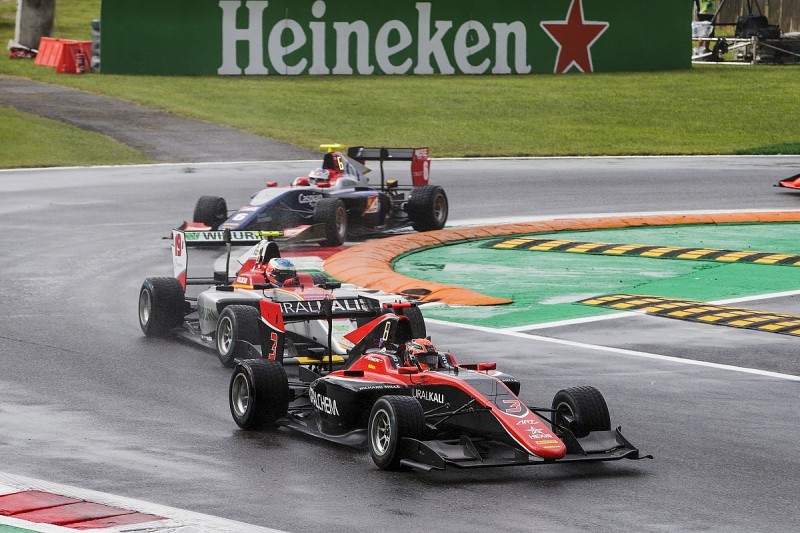 Mazepin then came under fire from Campos driver Laaksonen, who passed the Force India junior just as a virtual safety car came out on lap 17 and Laaksonen then gave the place back.

But the Finn secured a best ever result in GP3 with fourth when he attacked Mazepin around the outside of the Parabolica on lap 20 and used the momentum to pass at Turn 1.

It was fourth as the luckless Leonardo Pulcini, who qualified third, slowed in the closing stages with a broken gearbox and fell out of the top 10.

That promoted Ilott, who has scored points in every GP3 race this year. He still lost a few points to Hubert but limited the damage by finishing one spot behind.

Mazepin was lucky to see off a charging Giuliano Alesi on the last lap for fifth, while Pulcini's problem stripped Pedro Piquet of the reversed-grid pole, which now goes to Richard Verschoor in his second GP3 Series weekend with MP Motorsport during an impressive debut.

Jake Hughes struggled to make major inroads from 12th on the grid in his ART-run car and took ninth, ahead of Niko Kari who suffered a time penalty.