At the start, Alesi had to defend and went three-wide with the Jenzer Motorsport-run cars of polesitter Juan Manuel Correa and David Beckmann.

The latter was forced wide onto the sausage curbs and was then handed a puncture by Leonardo Pulcini, sending him into the gravel at Turn 5.

Further back, newly affiliated with Renault, Anthoine Hubert went from seventh to third, and then pulled off an audacious move on Correa on the outside of Turn 12, not a normal overtaking spot, to run second.

Alesi had to deal with multiple safety car periods plus a late one-lap shootout for victory, but each time he was presented with a neutralized pack he went quicker than his rivals, securing victory by two seconds as Hubert defended from Hughes.

Brit Hughes had started 13th after struggling with tyres on the previous day, but was into the top five at the end of lap one.

He passed Correa at T1 on lap seven of 16, sealing the final podium spot.

Correa held on to fourth ahead of the recovering Dorian Boccolacci, who had a poor start and spent the majority of the race recovering. 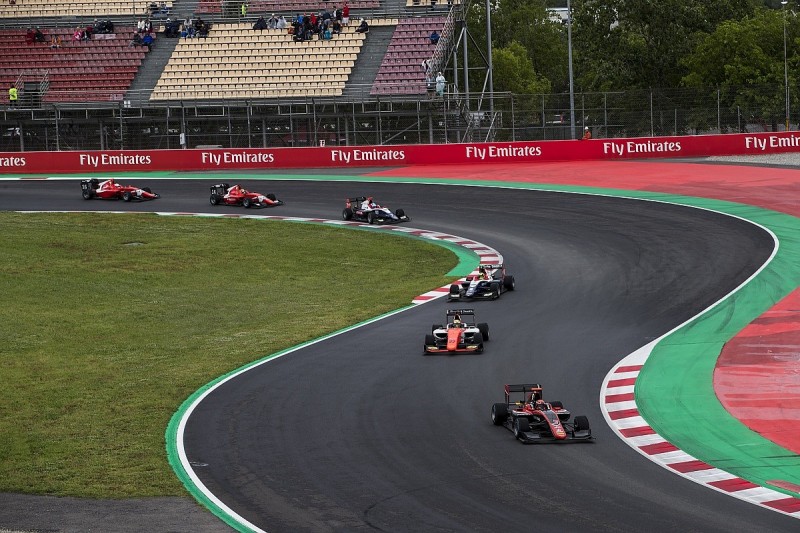 Niko Kari went from 20th and last to take sixth in an outstanding drive from the former-Red Bull junior.

He had to pass Ilott late-on, the Brit running as high as fourth but fell back in the closing stages as the track began to dry.

Simo Laaksonen was another prime-mover, taking seventh from 15th in a disappointing day for Campos.

After breaking his front wing, Pulcini did an admirable job to recover to ninth, as yesterday's dominant feature race winner Nikita Mazepin didn't look so bulletproof in the wet in the fourth ART-prepared car. He rounded out the top 10.

MP's Will Palmer was the only driver to start on slicks, but struggled to keep heat in the tyres and could only take 13th.

Beckmann and Tatiana Calderon both tried a switch to slicks towards the end of the race, but the track was still too wet in the middle sector and both drivers went off the track, Calderon brought out the final safety car on lap 13.