Shwartzman made a slightly better start than polesitting Prema Powerteam stablemate Schumacher, and Schumacher squeezed him to the inside on the run up to Turn 1.

As Schumacher turned in, there appeared to possibly be a minor bump from Shwartzman that sent Schumacher into the runoff area, although he kept his foot in and drew abreast on the climb to Turn 3.

Schumacher probed again at Turn 4, as Shwartzman ran a little wide, but the leader claimed the inside line for the first of the two sweeping left-handers and his advantage was secure.

Within six laps Shwartzman stretched the lead to a second, and it hovered around this margin for most of the rest of the race, before the gap shrank to 0.815 seconds as Shwartzman took the flag.

"It was really tough with Mick because he's so quick," said Shwartzman.

"This feels great. I did a little bit better start than Mick - he left space at Turn 1 and went wide, and that was really nice of him.

"My target then was to pick up a good pace to get away from the other guys and I think it worked out.

"The car felt amazing and I want to congratulate Prema, because now they've won the teams' championship."

Despite his defeat, Schumacher nevertheless stretched his championship lead over Dan Ticktum to 49 points, as the Red Bull Junior finished fourth.

That means that a points-scoring finish ahead of Ticktum in the first race of the final round at Hockenheim will give Schumacher the title.

Ticktum had a good first lap to rise from seventh to fifth, and then forced his way ahead of Marcus Armstrong for fourth on lap two. 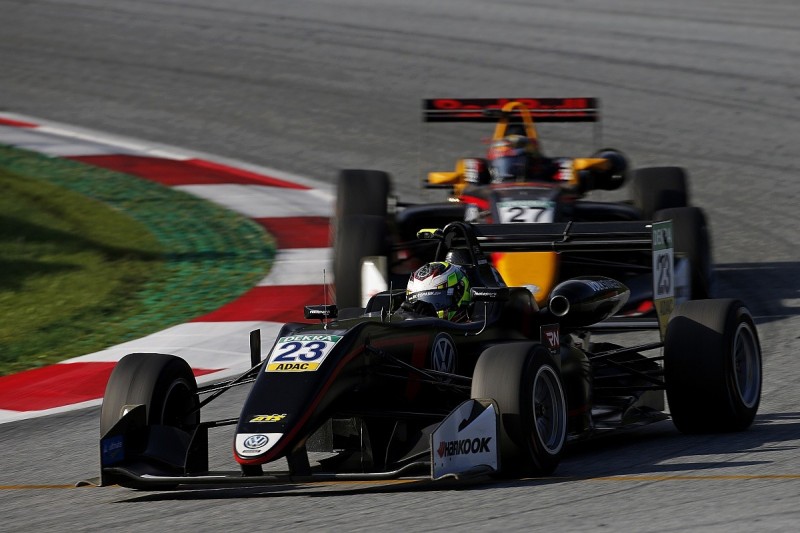 He then closed in on Motopark team-mate Jonathan Aberdein, but the increasingly impressive South African F3 rookie made no mistakes in defending.

Ticktum in turn was in the invidious position of having the Prema car of Armstrong lurking behind him, before the Kiwi fell away later in the race.

Ticktum mounted one last bid to pass Aberdein with a tyre-smoking lock-up at Turn 3 on the final lap, but could not prevent Aberdein taking the final place on the podium.

Ralf Aron ran sixth in his Prema-run car before he was passed at Turn 4 with 10 laps to go by Carlin duo Ferdinand Habsburg and Jehan Daruvala.

Motopark's Juri Vips, who lost places on the first lap from fourth on the grid, was also part of this battle before dropping back with a moment, but recovered to pass Aron for eighth on the final lap.

Alex Palou (Hitech GP) got the better of an early battle with Fabio Scherer with Sacha Fenestraz - who eventually retired - to claim 10th position and the final point.