Estonian Aron got a better start than polesitting Prema Powerteam stablemate Guan Yu Zhou and, despite Zhou attempting to defend, Aron was able to squeeze through on the inside and take the lead into Tarzanbocht.

Zhou kept Aron under constant pressure through the first half of the race.

"I knew tyre degradation was going to be high, and whoever pushed was going to suffer later on," said Aron. "But I 'underpushed' at the last corner and he attacked."

Sure enough, the Chinese Ferrari junior tried a move at Tarzan on the third lap, and constantly jinked around in Aron's slipstream.

Another attempt came on the eighth lap of 23, after Aron almost spun on gravel at the chicane - "It scared the shit out of me" - but again the leader held firm.

Over the second half of the race, Aron was able to pull out a gap of just over a second and held on for his second win of the season, and the first to carry full points.

Whenever Zhou attacked, he in turn came under pressure from Mick Schumacher, putting him in an invidious position.

Over the final few laps Schumacher fell away. "My clutch started spinning, so I had no more drive," he said. "With one or two more laps I don't think I'd have finished." 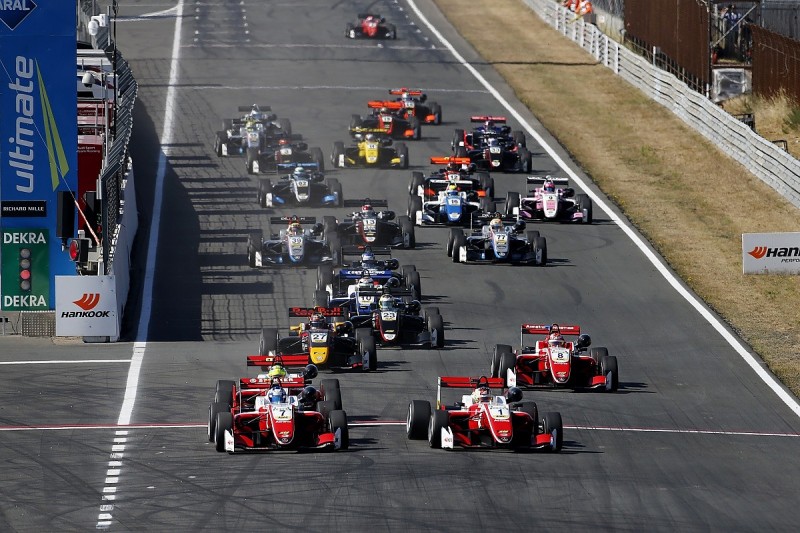 Red Bull Junior Dan Ticktum took fifth in his Motopark car, but a scappy second lap forced him to defend from team-mate Juri Vips, who had a mighty opening lap to rise from ninth on the grid, but almost threw away his position on the final lap with a moment at the chicane.

This duo completed the top six, while another Motopark driver, Jonathan Aberdein, kept Prema's Robert Shwartzman at bay for seventh.

Ben Hingeley got the better of Hitech GP team-mate Alex Palou, who had started ahead of him, on the opening lap and was able to hold off the experienced Spaniard for ninth.