Red Bull Junior Ticktum was leading the race from pole position when he was given a drive-through penalty for a jumped start.

Troitskiy, who had qualified his Carlin Dallara-Volkswagen third, moved up to second at the start when front-row starter Juri Vips stalled.

Guan Yu Zhou made a better start than Troitskiy and challenged around the outside of the opening Tarzanbocht, but dropped a wheel in the gravel and slotted into third place.

To his credit, Troitskiy, whose previous best Euro F3 result had been a ninth at the Hungaroring, kept Ticktum within a second before the leader served his penalty.

Once he inherited the lead, the SMP Racing-backed Russian pulled a gap on the pursuing Prema Powerteam car of Zhou, who was "struggling a bit with the rear tyres" and was over two seconds adrift when the safety car emerged for the second time after Julian Hanses crashed at the penultimate corner.

With Hanses's car against the barrier at the top of an enormous gravel trap, the extrication exercise proved too difficult for the marshals and safety crews and, after a long time under the safety car, the race was eventually red-flagged. 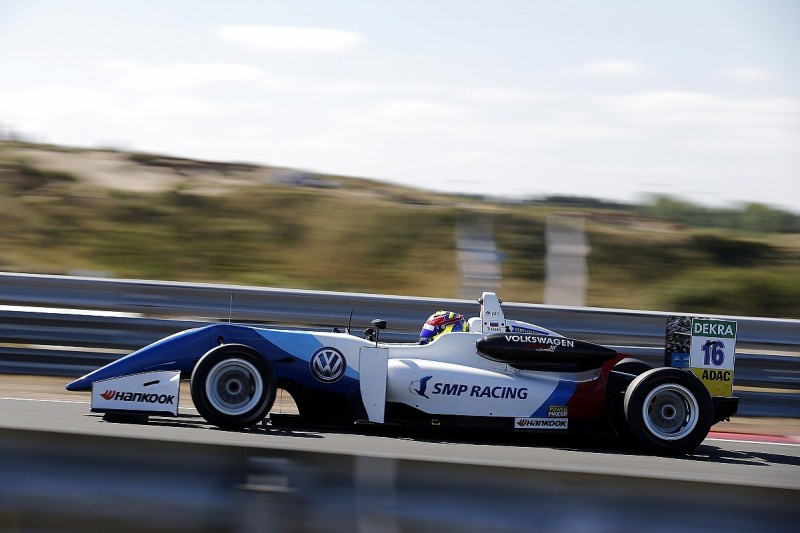 "The car was good and my pace was great, and I had a comfortable distance to Zhou.

"There's been a lot of preparation behind this and we have been pushing hard - I think we deserve it."

Behind Zhou, Force India protege Jehan Daruvala made it two Carlin drivers in the top three.

Jonathan Aberdein was next up in eighth for Motopark, while Artem Petrov scored his first Euro F3 points by claiming ninth for local team Van Amersfoort Racing.

The final point was taken by Enaam Ahmed, who raced up from 16th on the grid in his Hitech machine.

Of the Prema drivers who had qualified out of position, Mick Schumacher beat Ralf Aron to 13th after the Estonian ran wide onto the dust while trying to pass Sebastian Fernandez around the outside of Tarzanbocht.

They headed the recovering Vips, while Marcus Armstrong finally managed to find a way past Keyvan Andres for 16th.

Thanks to Ticktum's penalty, Armstrong continues to lead the championship, but Zhou is now just one point adrift.