Ahmed led from start to finish, while Red Bull Junior Ticktum dropped out of third place when his brake pedal went long and he was forced to pull off the track.

From second on the grid, Ahmed's Hitech GP Dallara-Mercedes easily beat the Motopark car of poleman Ticktum away from the line, while Prema Powerteam's Marcus Armstrong made his trademark rapid start to vault from fourth to second.

Ticktum tried hard to repass Armstrong on the first lap before the Ferrari protege began to consolidate second place.

On the fifth lap, Ticktum ran wide at Turn 1 before rejoining - he then locked up at Turn 2 and ran off the circuit again, before pulling into an access road.

That promoted Alex Palou to third place and, although the Hitech driver got close to Armstrong - who had a loose mirror so found it difficult to monitor the Spaniard - he never looked like mounting a serious bid for second place. 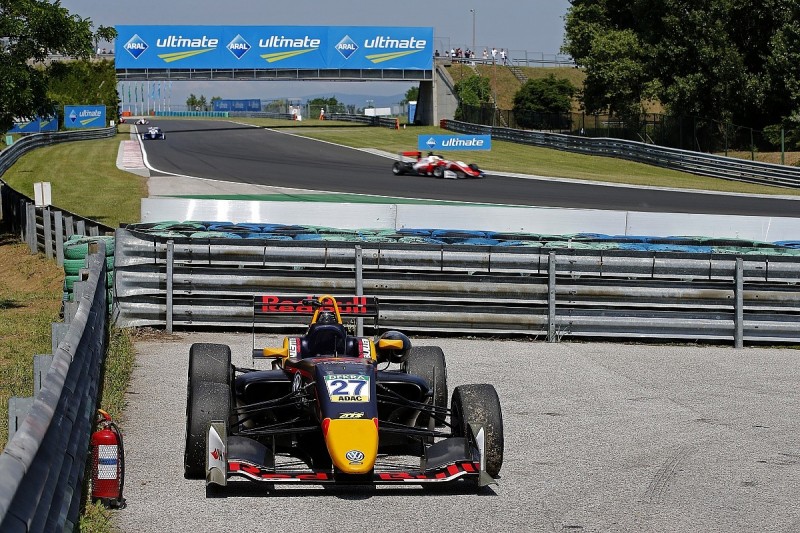 After early pressure from Armstrong, Ahmed pulled out three seconds over the first half of the race, and then stabilised the gap until the finish - he now holds a three-point championship lead over Guan Yu Zhou.

"My starts have been quite good this year, although Marcus's are the best," said Ahmed.

"I lit up really well and I thought my clutch was going to explode!

"When I push I tend to make mistakes with going off, but I was reasonably far in the lead so I just cruised like I was in California.

"It's hard to follow here in the dirty air so I knew I had the gap in hand."

Zhou had no answer to the pace of the leading trio as he circulated in fourth, and equally he never came under threat from Prema team-mate Robert Shwartzman.

Jehan Daruvala had a tougher time in sixth place, the lead Carlin driver spending most of the distance successfully fending off the Prema machine of Mick Schumacher, who had risen from 11th on the grid.

This is turn allowed two more Carlin drivers, Ferdinand Habsburg and Sacha Fenestraz, to shadow the duo in front, Habsburg finally breaking his points duck for 2018 after a dismal run of bad luck.

The final point was claimed by Hitech's Ben Hingeley.