Norris was running in second place in the final race of the weekend at the Red Bull Ring, easily enough to seal the title before next month's Hockenheim finale, when he mounted a bid to pass Joel Eriksson for the lead with five and a half laps to go.

He lost his right-front-wing endplate in contact with Eriksson, and the deteriorating handling left him vulnerable to attack from behind.

A collision with Ralf Aron on the final lap put both Norris and Aron out of the race, while fifth place for Norris's main rival Maximilian Gunther sends the championship to Hockenheim.

"We love him when he does stuff like that, but unfortunately the circumstances this time meant a bit of damage that left him on the back foot.

"If he'd kept away from Aron for another half a lap, we'd all be celebrating, but over the weekend we've increased our lead in the championship, so how can we be stressed?"

Carlin praised both Eriksson and Norris for their ferocious battle.

"It was spot-on," he said. "Both drove really well, and it's really difficult to pass someone like Joel because he's a bloody good driver. 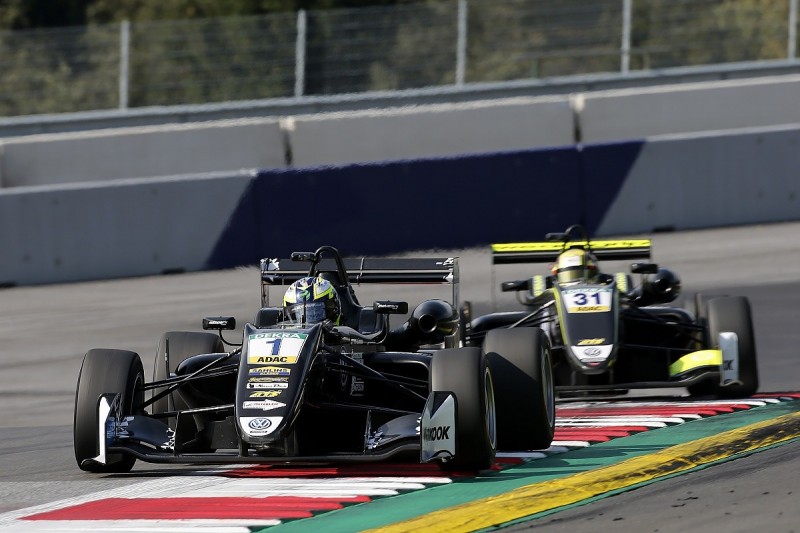 "If that had been the championship decider and we'd lost it because of that I'd be really angry, but he was just trying to add to his tally.

"So we'll be racing at Hockenheim for three wins, not for the eighth place necessary.

"Because Lando's like that, that's given him his edge.

"I'm glad it didn't damage Joel's car - no penalties should be needed."

Norris told Autosport: "I obviously just misjudged it pulling to the right and damaged my front wing.

"I was struggling after that mainly on the two left-handers, but also on the rights."

Of the last-lap clash with Aron, he added: "I saw he was braking a little bit on the straight to dive to the right, but because he was so close he lost downforce, which meant he turned me around.

The stewards disagreed with Norris, slapping Aron with two licence penalty points and a 20-second time addition - although the latter punishment made no difference as he was classified 18th and last anyway.

They absolved Aron of any blame for a first-lap clash that put Callum Ilott out of the race.

Has F1's best training ground been sentenced or saved?