The Malaysian, making his return to F3 from his usual programme in Formula Renault 3.5, led from pole position to the finish.

King would occasionally drop back in a vain bid to take fastest lap, then close on the sister Carlin Dallara-Volkswagen.

"It's really awesome to be driving the F3 car again, and driving at this track is very special," said Jaafar.

"Jordan was very quick throughout the race. We had two different goals: him fighting for the championship and me for my own race. I just focused on doing a consistent job."

A rather clear-cut jumped start carried championship leader Will Buller from sixth to third, but Antonio Giovinazzi dived down the inside of the Northern Irishman into Paddock Hill Bend.

Giovinazzi did a good job in his Double R Racing car to not lose too much ground to the duo in front, and likewise was comfortably clear of Nicholas Latifi, who moved up to fourth when Buller served his drive-through penalty.

Latifi has been given a five-place grid penalty for race two for going off the track in an incident zone, after Sean Gelael had spun out, but AUTOSPORT understands the Canadian is arguing that there were no yellow flags before the corner. 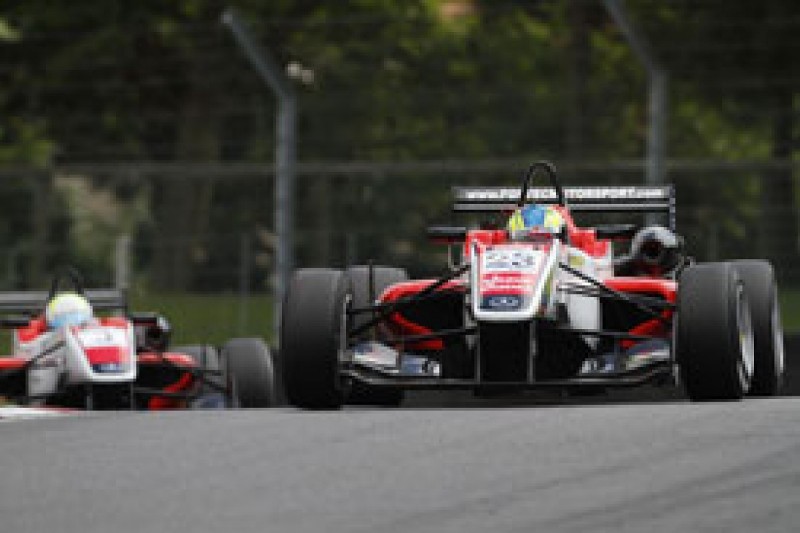 With Sean Gelael exiting the race in the early stages, Tatiana Calderon took eighth and earned pole position for the reversed-grid counter on Sunday morning.

National Class poleman Ed Jones did not get away from the grid on the green-flag lap and started from the pitlane.

That gave Sun Zheng the advantage, but the Chinese driver had to shrug off a strong challenge from Cameron Twynham during the first half of the race before taking victory. Jones retired on the sixth lap.