ART Grand Prix’s Alexander Smolyar won the first FIA Formula 3 race of the 2021 season in Spain, which ended under a safety car.

Having started second after the top 12 from qualifying were reversed, Smolyar took the lead from Carlin rookie Jonny Edgar on the fourth lap of 22 at the Circuit de Barcelona-Catalunya, with the help of DRS at Turn 1 after a tight battle during the first few laps.

Smolyar had broken the DRS train by lap eight, giving him more than 1.5 seconds on Edgar which he extended to more than two seconds by the 12th lap, although a charging Clement Novalak had started to threaten before the safety car appeared on lap 19 when HWA Racelab driver Oliver Rasmussen ended up in the gravel at the final corner.

The Russian sophomore's victory, only his second podium finish in F3 after a third place at Monza last year, also came with an added two bonus points for securing the fastest lap. Smolyar was denied a maiden F3 win last year at Silverstone when he picked up a post-race five-second time penalty for excessive weaving.

Trident’s Novalak rose from sixth on the grid to finish second for his first F3 podium since the second of the four Silverstone races held in 2020, while MP Motorsport rookie Caio Collet took third on his debut.

Charouz Racing System’s Logan Sargeant, the highest placed returning driver from last year, finished fourth after completing a late deal to sign for the Czech team earlier this week, while poleman Edgar slipped back to fifth.

Ido Cohen’s Carlin car ground to a halt on the track during the formation lap, forcing the start to be aborted and inducing another formation lap for the other 29 drivers while he was towed back to the pitlane.

Despite Edgar having a great getaway and remaining in first for the initial few laps, he dropped down to fourth by the 16th lap as his tyres wore away, before being overtaken Sargeant the following lap. 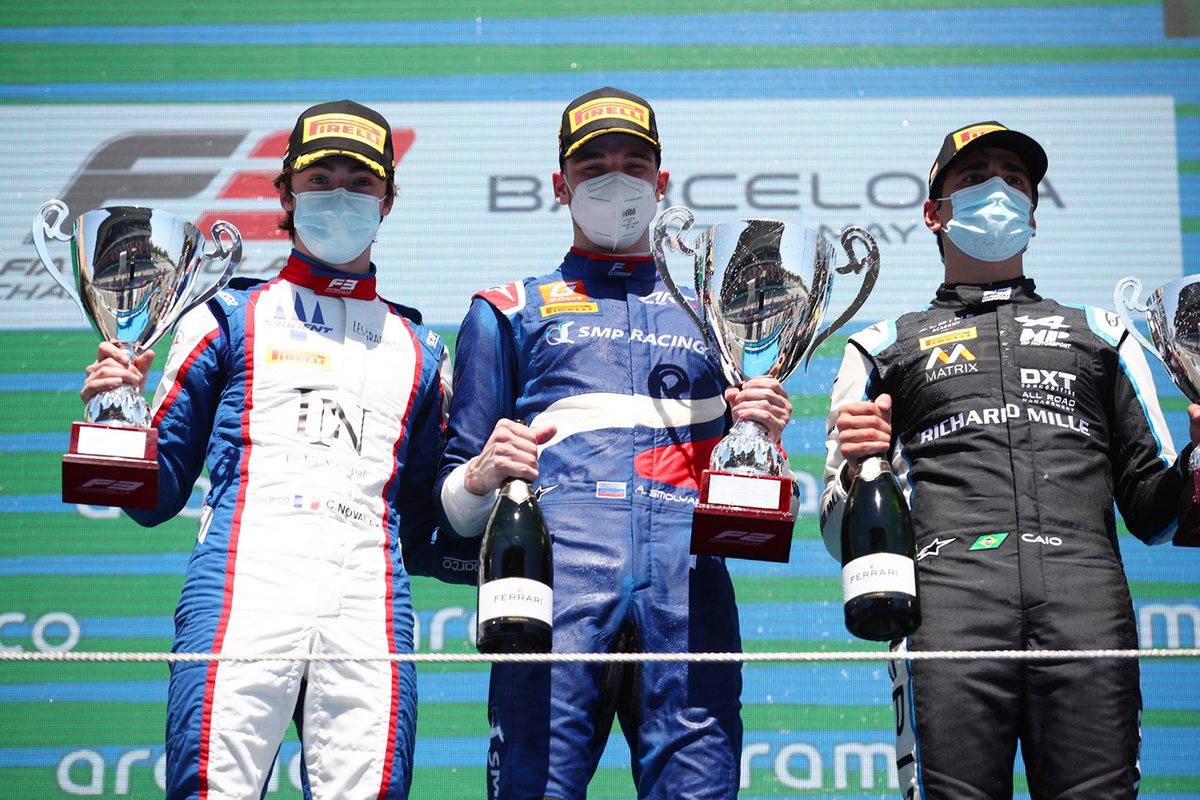 Their Prema team-mate Arthur Leclerc was forced to pit on lap 14 after a rear left puncture, dropping him down the running order to an eventual 28th place finish after Rasmussen's off.

Trident’s Jack Doohan, who qualified second yesterday, dropped down the order from 11th to 19th during the hectic first lap and eventually finished 17th.

The top 12 of this morning’s race is reversed to form the grid for this afternoon’s race, with Charouz’s Enzo Fittipaldi starting on pole.