Last weekend's GP3 schedule was cut after wet weather caused delays to the Italian Grand Prix qualifying session on Saturday, leading to the first race in the third-tier category being postponed and the second call off.

GP3 joins Formula 2 for a standalone event in Jerez on October 7-8 where Aitken, now 43 points behind championship leader and Monza race winner George Russell, would like to see the missing event take place.

"I know there was some talk on the weekend of them rescheduling the race for Jerez," he told Autosport.

"Fingers crossed that happens because we all put a lot work and effort in and to only have one race [last] weekend was a bit sad.

"It makes my life a bit more difficult so I'm hoping we do have that reversed-grid race in Jerez, but we never know."

Mercedes F1 junior Russell - Aitken's ART Grand Prix team-mate - was philosophical about losing out on the second race in Italy.

"In terms of race two, Jack and my title rivals would have been starting ahead of me so from that perspective it's almost played in my favour because it hasn't given Jack an opportunity to catch some more points," he said.

"[But] there's two ways to look at it - I would have loved to have gone racing again at Monza.

"I think we had the pace to be able to move forward again and maybe potentially have a weekend like we had in Spa [where Russell scored a win and second place].

"But obviously we can't do anything about mother nature and it's the price you pay for being with F1.

"They obviously have to take priority and if we are the ones that have to lose out, so be it."

Autosport understands no plans have been made to reschedule the missing Monza race at Jerez at this stage, but that an announcement will be made if that development does occur. 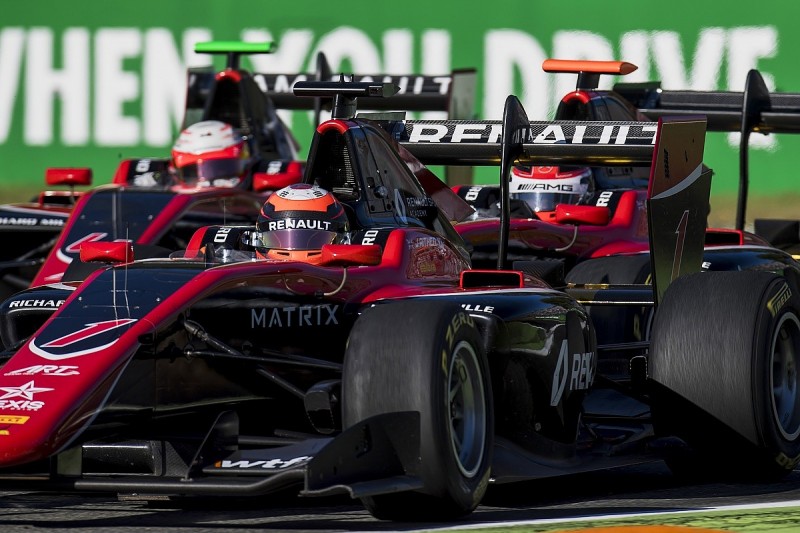 Aitken finished second to Russell in what was a tight three-way fight for the win at Monza with their team-mate Anthoine Hubert.

He jumped both Russell and Hubert at the end of the virtual safety car period but was overhauled by Russell before struggling with understeer in the closing stages.

Aitken described his displeasure at missing out on the win but said he was happy with his performance overall.

"[I'm] a bit disappointed to lose ground again [in the points] but it could have been a lot worse," he said.

"I would have loved to have beaten George and I viewed this weekend as an opportunity in that sense.

"Not having qualifying and other things conspired against us, [so] I think we did as good as we could have done and limited the damage.

"I can't be too displeased."