Toto Wolff hopes Mexico’s high altitude conditions might allow Mercedes to give Red Bull “a run for their money” by masking the draggy nature of its Formula 1 car.

Mercedes has three races remaining this season to break its win drought and avoid its first campaign without a victory since 2011.

The team struggled to take the fight to Red Bull and Ferrari in the early part of the season under the new regulations, but has since made progress with its W13 car.

Lewis Hamilton came close to victory in the United States Grand Prix last weekend, only losing the lead with seven laps remaining after Max Verstappen fought back from a slow pitstop.

One of the biggest issues for Hamilton in the lead fight against Verstappen was his top speed deficit to the Red Bull, which has enjoyed a straight-line advantage over the field through much of the season.

But with the Autodromo Hermanos Rodriguez sitting 2.2km above sea level, the high altitude conditions and thinner air mean teams struggling with draggy cars will be at less of a disadvantage this weekend in Mexico, with everyone running high downforce packages.

Asked about Mercedes’ chances in Mexico, team principal Wolff said he would “need to bite his tongue” and avoid making any bold predictions, but that the conditions should aid Hamilton and team-mate George Russell’s chances.

“Sometimes this year I’ve said we should be good at a particular track, and we didn’t [perform] and then the other way around,” Wolff said after Sunday’s race at the Circuit of The Americas.

“So on paper, Mexico looks good. Our draggy car should be effective in the thin air.

“It is good that it is coming next week so I hope we can give them a run for their money.” 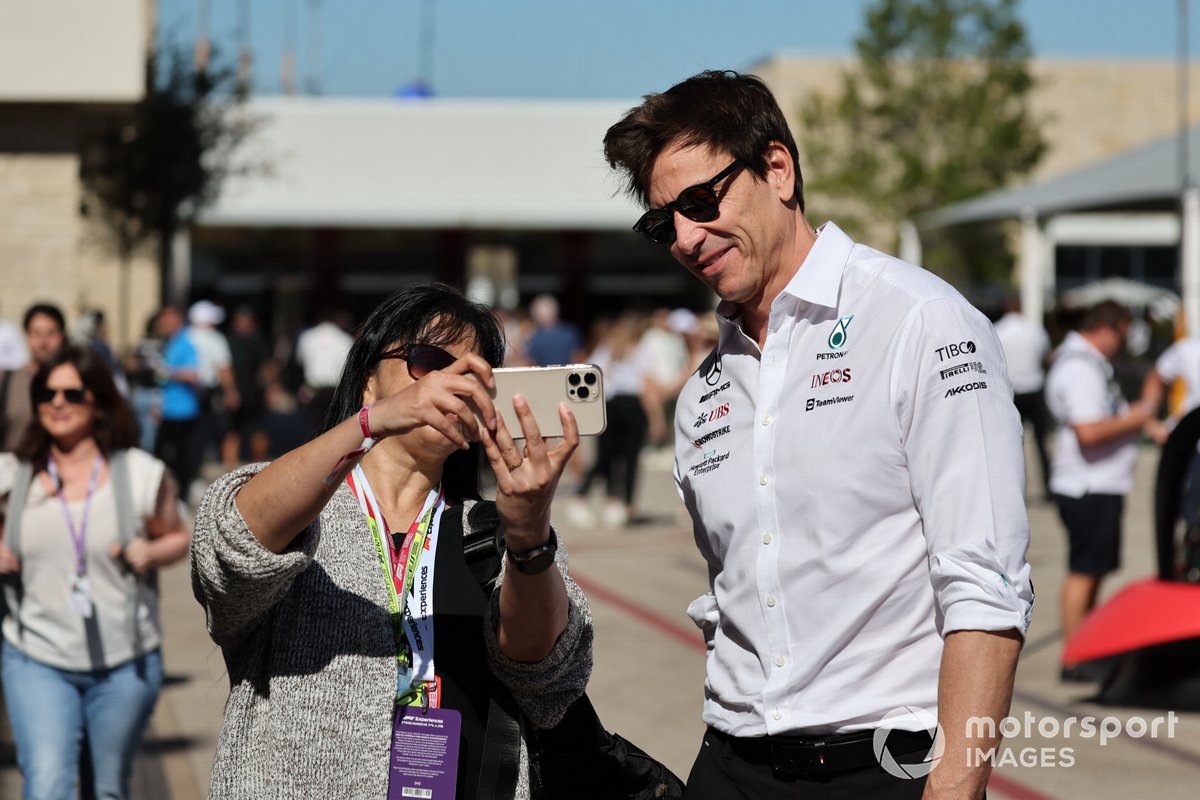 Toto Wolff, Team Principal and CEO, Mercedes AMG, has a photo taken with a fan

Mercedes has only scored one win in Mexico in the last five years, courtesy of Hamilton in 2019. The track has typically favoured Red Bull more given its previous high downforce strength, with Verstappen winning in 2017, 2018 and 2021.

Wolff said the W13 car was “just too draggy overall”, explaining why Hamilton was powerless to keep Verstappen back in the closing stages of the race in Austin.

“That is something that we need to figure out for next year,” said Wolff.

“The cost cap plays a role. We cannot just produce an infinite amount of low drag bits, or spend a lot of time in the windtunnel to come up with solutions.