The Williams Formula 1 team has explained the strategy calls that resulted in George Russell claiming a front row start at Spa – an approach Toto Wolff called "risky, but clever".

Williams driver Russell will line up second on the grid for the 2021 Belgian Grand Prix behind polesitter Max Verstappen and ahead of Lewis Hamilton after stunning the Q3 field in qualifying on Saturday.

Russell's lap of 2m00.086s in the final moments of qualifying put him on provisional pole, with only Verstappen able to better his time.

The Briton had originally left the pits following the red flag period caused by McLaren's Lando Norris crashing heavily at Eau Rouge at the start of Q3 still on full wet tyres, before pitting to switch to the intermediates that Red Bull and Wolff's Mercedes squad had fitted for the resumption.

That put Russell out of sequence to the rest of the Q3 runners and when he finally set a timed lap in the final segment of qualifying it was initially only good enough for ninth place and almost eight seconds slower than what would become his Q3 personal best.

But Williams head of vehicle performance, Dave Robson, has explained how Russell was in fact building up for a final "all in" effort at the end of Q3 using the confidence he had built up with his earlier tours, as well as using the full battery energy deployment from his power unit.

"That final phase in Q3, obviously we left on that full wet while knowing that we had plenty of time to make the pitstop," Robson explained.

"George was very happy that it was inter conditions so we made the stop and then we felt that we could either do two pushing laps or, with the track drying quite quickly, we could just go all in and aim for that one good lap at the end.

"So, we went for that. We took the opportunity to do the prep lap, get the tyres, the brakes the power unit all in the right state, and then just go for it.

"It worked out very well. He obviously had pretty good track position. So it all just came together nicely.

"But I think Toto's description is probably perfectly fair. In our position we were already ahead of the curve and didn't really have a huge amount to lose.

"Once we got him in that position his lap was extremely good. He just made the absolute most in every corner of what we were able to give him.

"It's hard to keep finding words to describe his performances – when he really has a good qualifying session he really does just get better and better as the session goes on.

"And that's what we saw – he was brave, but sensible. Just quick, just calm – just a really good, professional, brilliant lap." 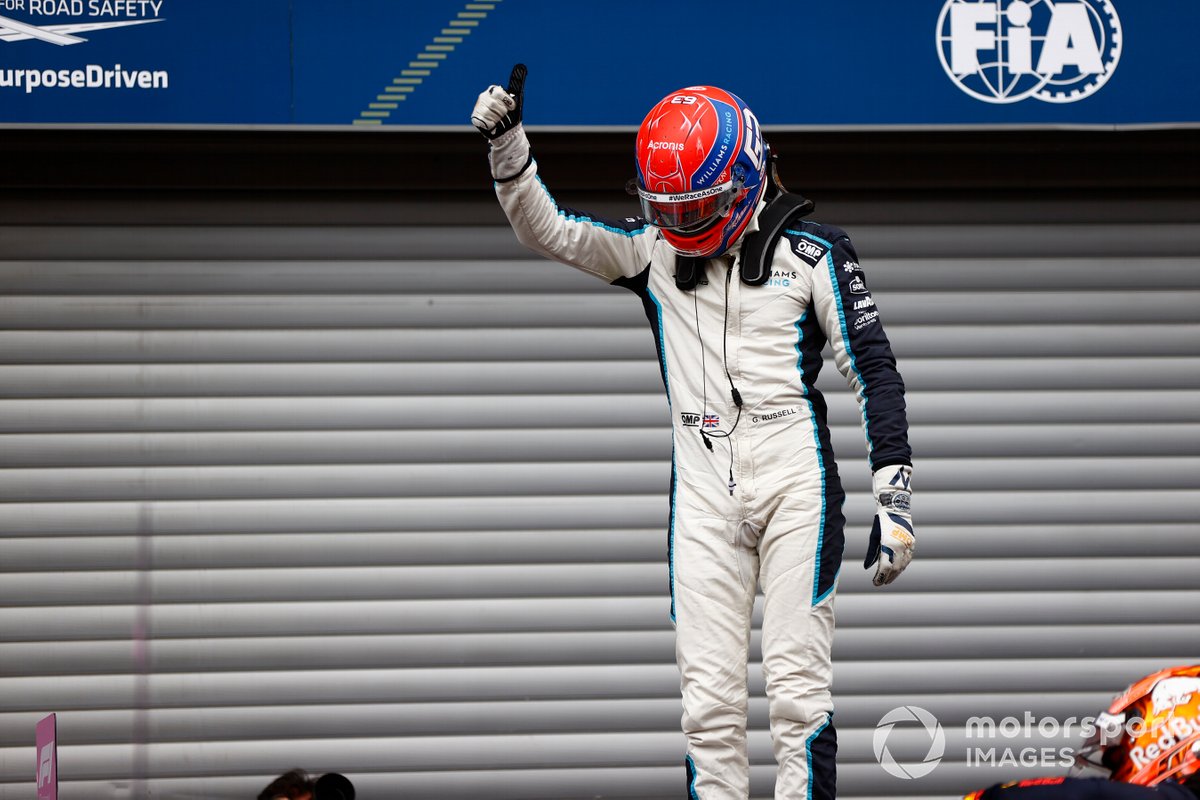 An additional consideration for Russell's final Q3 lap was that he was running used intermediates, as Williams had committed to not saving any of its four sets of the green-walled compound in a bid to try and ensure it made it into the later stages of qualifying.

This meant the team sent Russell and Nicholas Latifi out on inters at the start of the delayed Q1, where the rest of field conducted the initial exploratory laps on the full wets – a call Robson described as "aggressive" to "get the driver's confidence up".

But the soaking surface in Q1 plus the 40-minute delay following Norris's crash meant the inters Williams put back on Russell's car for the end of Q3 were not excessively worn and had been brought back up to temperature in the blankets in the team's garage.

"I don't think it was a huge loss [Russell running used inters in Q3]," said Robson.

"It's one of those situations where it's just incredibly difficult to know – the conditions are changing all the time.

"But we did know that that first set of inters from Q1 we'd used when it was really quite wet. So they weren't badly damaged when we pitted off them.

"And then there had been such a long period of time since Q1 run one they were all hot and back up to temperature.

"So, we were reasonably confident that they would be in good shape. Obviously, we never dreamed of getting P2. But we were happy they weren't bad."