OPINION: Sebastian Vettel will step away from Formula 1 at season's end. But the reaction to his impending departure was tinged with more sorrow than that typically afforded to a multiple world champion signalling the end of an era, as the Aston Martin driver has a perspective and willingness to speak up on issues beyond grand prix racing that few of his contemporaries do

News of Sebastian Vettel's plan to retire from Formula 1 at the end of the season was met with widespread sadness across the sport's fanbase and paddock community.

This is a driver who has established himself as one of the all-time greats, winning four world champions and enjoying the kind of dominance with Red Bull few have tasted in F1 history.

But Vettel is also a driver who, as he has got older, grew into his voice and became an incredibly significant spokesman for F1's future and the need for change.

We've seen that in recent weeks as Vettel has advocated the use of carbon-neutral fuels, driving Nigel Mansell's 1992 Williams FW14B, and even the original Aston Martin car from 1922 at Paul Ricard last week.

Vettel talked about the 1922 car run after qualifying last Saturday, and was asked who would take over as the voice for F1 when the likes of him and Lewis Hamilton called it quits.

"Instagram!" came Vettel's reply, something we brushed off at the time of being a wry comment on the state of the modern world from a driver so adverse to using social media throughout his career. And yet it ended up being the platform through which he would drop the biggest bombshell since revealing his shock decision to quit Red Bull at the end of 2014.

That came after a period where Vettel was in absolute prime. Think to his domination of F1 through the back end of the 2013 season, when he tied Alberto Ascari's record of nine consecutive race wins, smashing the field time and time again; pulling two seconds per laps on the pack in Singapore; sitting out the final runs in Q3, so comfortable was his advantage in the fight for pole. Few could get close to him. 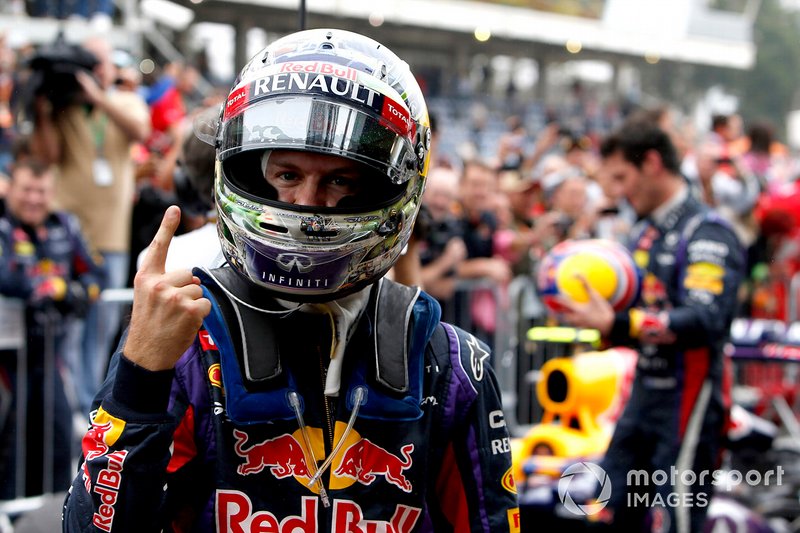 Vettel's 2013 season was one of the most dominant in recent times, as he claimed a fourth world title on the trot with Red Bull

He had long brushed off the 'crash-kid' jibe laid at his door by then McLaren boss Martin Whitmarsh - who he would later work with at Aston Martin - and become one of the most complete racing drivers F1 had seen. He had four world titles and 39 race wins to his name by the age of 26, making many of the all-time records seem well within his reach.

The difficulties of 2014 with Red Bull paved the way for him to join Ferrari, following in the footsteps of his hero and friend, Michael Schumacher. Schumacher had always looked out for Vettel through his early F1 days, an act repeated by Vettel toward Schumacher's son, Mick, over the past couple of years.

PLUS: How ‘mentor’ Vettel is giving back to the Schumacher family

Much as Ferrari had looked to Schumacher in 1996 to revive its fortunes after a fallow period, Vettel was expected to do the same.

And it all started so well. He won his second race for Ferrari in 2015, nailing the tyre strategy in Malaysia to beat the all-conquering Mercedes cars, and spent the final two years of the regulation period regularly outstripping the performance of the cars put at his disposal. With the overhaul of the aerodynamic rules in 2017, it was the perfect chance for Vettel and Ferrari to return to the top.

Yet it never panned out that way. A mixture of slip-ups by Ferrari and mistakes by Vettel - Hockenheim 2018 being the most brutal turning point - meant the early promise of title challenges in 2017 and 2018 faded to defeats at the hands of Lewis Hamilton and Mercedes, the juggernaut proving too strong over the course of a season. With the arrival of Charles Leclerc at Ferrari in 2019, attention at Maranello shifted to the bright young talent that left Vettel on the sidelines and in search of a new home for 2021.

Vettel was the marquee signing Aston Martin wanted to start its new era, prompting owner Lawrence Stroll to exercise a clause that allowed Sergio Perez's contract to be terminated. Vettel was seen as the perfect driver to help Aston Martin on its five-year plan to get to the top of F1, bringing experience and significant ability. 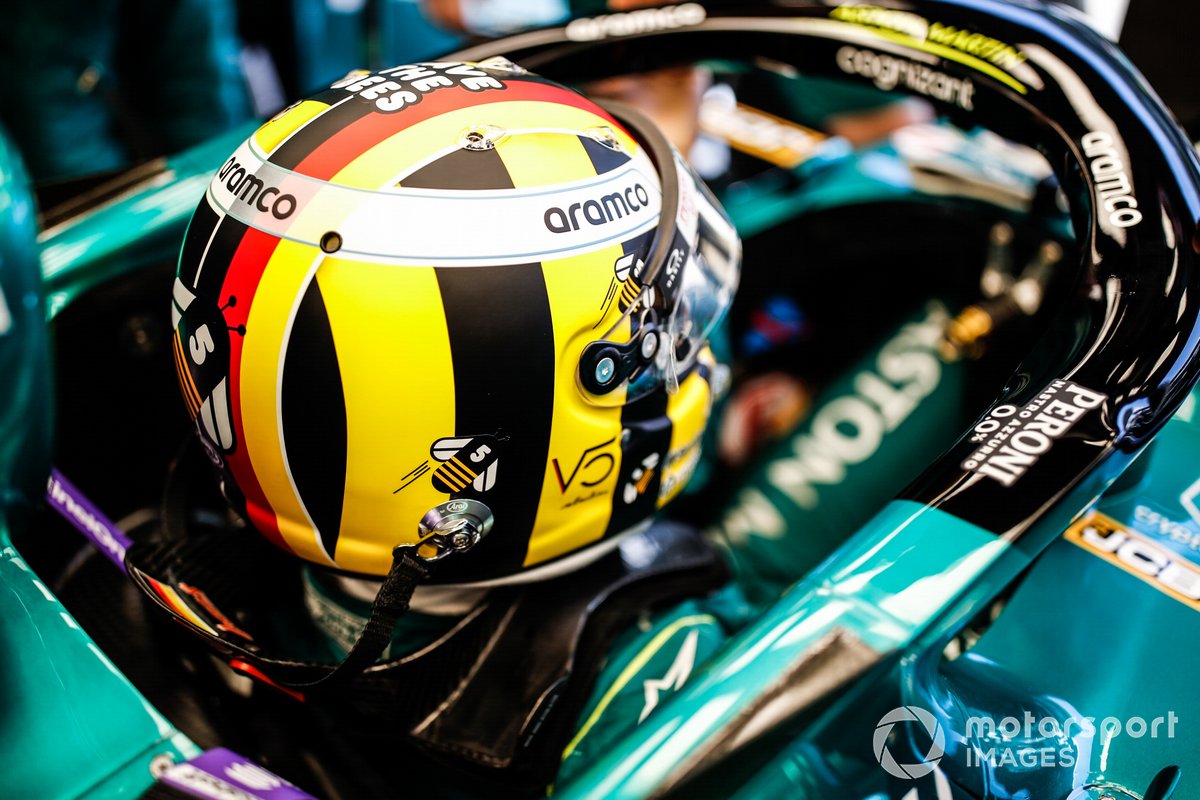 Vettel has used his stint at Aston Martin to draw attention to issues he believes are important, including the plight of bees

But the final years of Vettel's career are unlikely to be remembered for his on-track efforts. Sure, there have been some brilliant moments - think to his podium in Baku last year, or hunting down Esteban Ocon for what would have been an unlikely victory in Hungary, only to later be disqualified - but the majority of headlines surrounding Vettel have been for his noble off-track causes.

Vettel has been the voice F1 has needed. He's not been afraid to hold a mirror up to F1 and prove its ugly shortcomings, noting the need for change as the climate crisis facing the world becomes more and more severe. He's even held that mirror up to himself, calling himself a hypocrite on British television just months ago because of his commitment to the environment while racing in a gas-guzzling, globetrotting series.

So it is little surprise that Vettel discussed the challenges facing the world in his retirement announcement on Instagram.

OPINION: Why Sebastian Vettel is the voice the world needs

"I feel we live in very decisive times and how we all shape these next years will determines our lives," Vettel said. "My passion comes with certain aspects that I've learned to dislike, they might be solved in the future but the will to apply that change has to grow much, much stronger, and has to be leading into action today.

"Talk is not enough and we cannot afford to wait. There is no alternative. The race is under way. My best race? Still to come. I believe in moving forwards and moving on. Time is a one-way street, and I want to go with the times."

Post-F1 Vettel is going to be a phenomenal force in encouraging the change the world needs, using his platform as a F1 great to spread the word and hold people to account, much as he did on Question Time a few weeks ago. It was a good sign of the kind of figure Vettel will now become, even if he has since said he has no interest in moving into politics (which, frankly, is a loss for politics).

But the biggest loss for F1 is having someone who is so eager and willing to speak up on the important stuff that goes way beyond racing cars. When news of fan harassment emerged at the Austrian Grand Prix, who was the first to call for lifetime bans against the perpetrators? Vettel was. Who was the one wearing a rainbow shirt in Hungary last year to speak out against its anti-LGBTQ+ community laws? Vettel was. Who was the one joining Hamilton in leading drivers to take a knee and speaking up amid activism around the world in 2020? Vettel was.

Vettel has been the strongest part of F1's moral compass in recent years. As strong as the memories may be of his on-track brilliance over the years, what he has contributed off-track, and the idea of no-one being there to pick up the mantle with quite the same eagerness he has carried it, is surely the biggest loss facing us as a series right now. 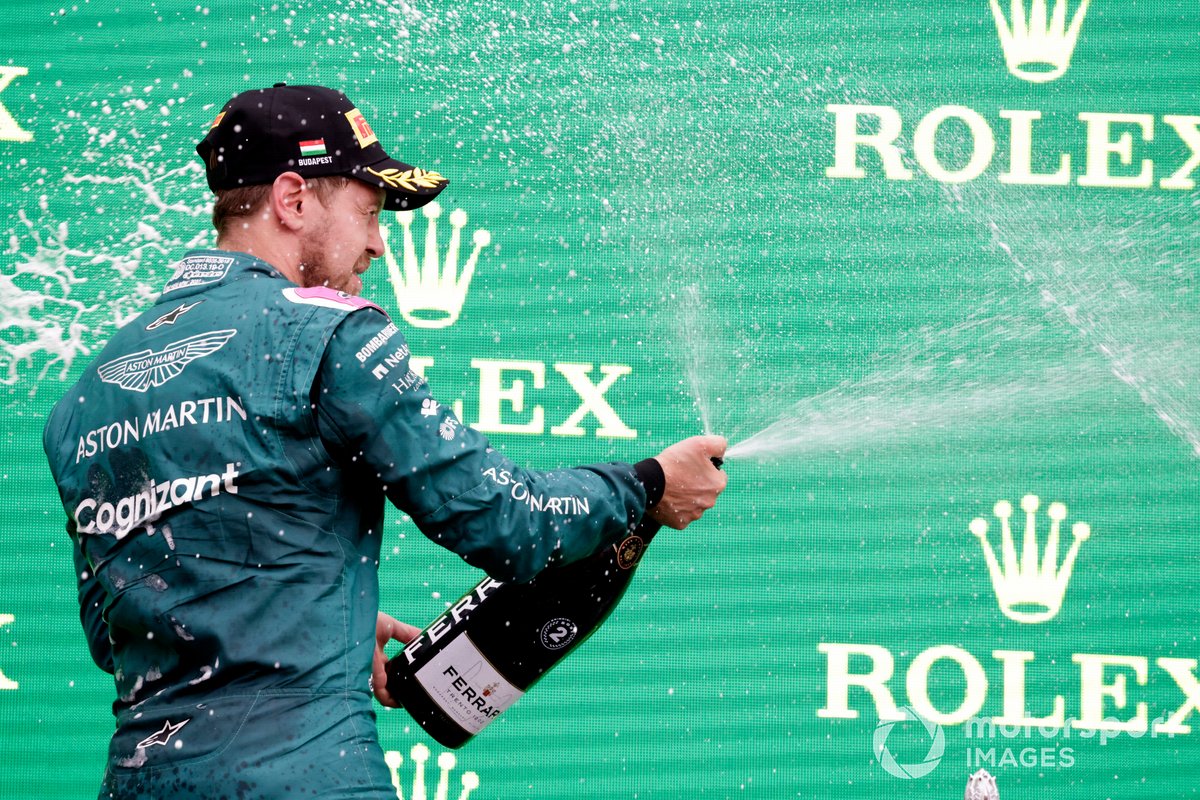 Vettel has called time on his F1 career, but believes he's only just getting started in his advocacy aims