Street circuits are known for being mentally taxing despite the slower speeds involved, requiring full concentration at all times and little time for respite on the short straights.

But Singapore is a beast like no other. It is renowned for being one of the hardest races to compete in both physically and mentally, meaning it requires a kind of preparation unlike any other race.

Daniel Ricciardo says his first Singapore Grand Prix back in 2011 remains the toughest physical activity he has ever completed. “I wasn’t prepared, and that sounds like I was partying all week!” he tells Autosport.

“I didn’t realise how much the humidity and the relentless nature of that circuit with like no real straights to have a rest. I’d never really experienced anything like that.”

It didn’t help that Ricciardo was then racing for backmarker outfit HRT, meaning he found himself four laps down by the chequered flag in 19th place - hardly the same kind of motivation those fighting at the front would enjoy.

“I just remember that race was just a grind for me,” recalls Ricciardo. “I got out of the car, and I remember saying that was physically the toughest thing I’ve ever done.

“I also made a promise saying I will never feel this pain again in a Formula 1 car. Since then, Singapore was actually pretty good.”

F1 drivers may be elite athletes working with performance coaches and their teams to try and unlock more human performance. But their regular level of fitness and training plan is something that still needs adding to in the lead-up to Singapore.

The heat is one of the biggest factors F1 drivers need to adjust to when they race in Singapore. The average year-round humidity in Singapore is over 80%, while the temperature in October is still around 30ºC given its proximity to the equator. The drivers may be used to hot conditions when racing in the Middle East or mainland Europe at the height of summer, but nothing comes close to the sapping conditions of Singapore.

If you follow the F1 drivers on social media, you will have seen some of the inventive ways their trainers have recently been getting them ready for that challenge. Last week, Carlos Sainz posted a video of himself on Instagram riding an exercise bike in a sauna as a way to try and get used to how hot it will be in the cockpit through the race in Singapore. Other approaches include adding extra layers of clothing for routine workouts, or simply sitting in the sauna at a really high heat as a way to teach the body what to expect. Every workout becomes that much harder, but it will be worth it come race day.

But it's not only the heat and humidity that makes Singapore such a gruelling challenge. Unlike the high-speed street tracks of Jeddah and Baku, Singapore’s average speed is quite low. Charles Leclerc’s pole lap in 2019 was 1m36.217, around eight seconds slower than Sergio Perez’s pole time in Jeddah this year - despite the Jeddah track being 1km longer than Singapore. The 23-corner layout also means there is not much of a chance to take a breather.

It all results in the Singapore race being one of the longest of the season without fail. Since joining the calendar in 2008, the Singapore Grand Prix has never been completed in less than one hour and 51 minutes - in 2018 - and has hit F1’s two-hour time limit on four occasions. No other race gets as close to the time limit so often, meaning endurance is a big element drivers must prepare for - particularly managing the heat for so long.

One of the additional challenges for drivers is adjusting to the timezone. This may be something to bear in mind at every race, but Singapore is more tricky because it is a night race. The best approach is to remain on the European timezones, which means bedtime is around 6am before rising mid-afternoon. Teams make special preparations for Singapore, ensuring hotels know not to disturb their personnel for housekeeping and that the unconventional sleeping habits are accounted for.

More: Why a good night's sleep is not just a Singapore GP issue

Nicholas Latifi will be making his first appearance in Singapore this weekend, and admits he is unsure how to balance his preparations. He has always favoured getting to races as early as possible so he can adjust “not only for the time but for the climate.”

“I’ve not done Singapore yet, but it’s a strange one,” says Latifi. “I guess you want to go to get used to the climate early, but the time you don’t, because it stays on the UK! So the later you go out, the easier you’re probably going to switch to the time. It’s a difficult one.” 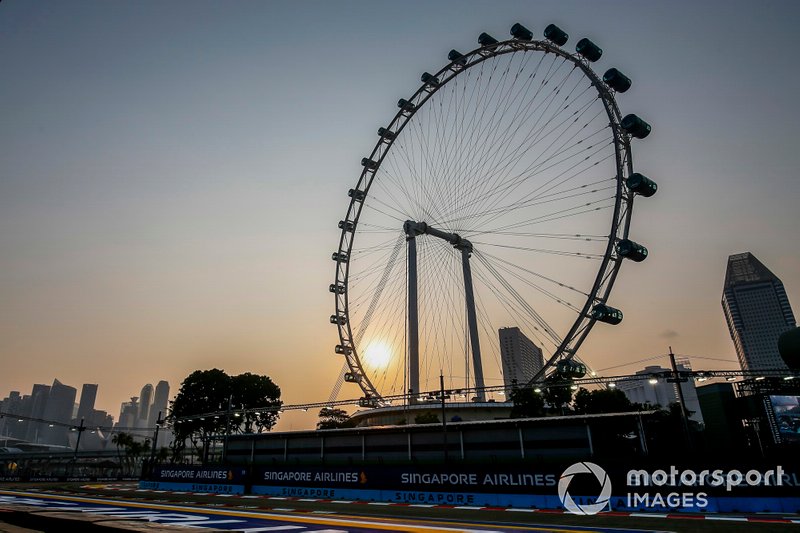 The Singapore Flyer at sunset

The extra challenge this time around in Singapore will be the new generation of cars. A lot has changed since 2019, with the regulation overhaul for this year and increased weight of the cars making them more sluggish in slow-speed corners, which has made street tracks more difficult.

And then there is the bouncing that teams have encountered this year, which will be even harsher for teams going over the bumpy streets around Marina Bay. Esteban Ocon said at Monza he thought the cars would feel as stiff as go-karts hitting the kerbs, while Pierre Gasly said it would be an extreme race for everyone. But Singapore nevertheless remains one of the favourite races on the calendar for the drivers, all of whom are excited to get back to the track - and for some, drive it for the first time.

All the teams know by now how to prepare for Singapore, but after three years away, it is likely to be the toughest challenge drivers have faced for some time.