Lando Norris admits he is "more unhappy" with Formula 1 rival Alex Albon's Japanese Grand Prix lunge after reviewing footage, as he feels the Red Bull racer deserved a penalty after all

Albon had gone the inside of Norris's McLaren from a long way back into the final chicane on the fourth lap at Suzuka, colliding with his fellow rookie and forcing him off the track.

Speaking immediately after that race, Norris gave credit to Albon for what he reckoned was a fair manoeuvre - a reaction that earned plaudits from Albon's team boss Christian Horner.

Yet in the lead-up to the following race in Mexico, Norris said he had changed his mind over the incident - something he conceded "is going to look terrible now in the media".

At the time of the clash, Norris had picked up debris - shed by Charles Leclerc's Ferrari - in a brake duct, compromising his McLaren's performance. He said that had clouded how he had viewed the incident with Albon, and on watching footage of it his opinion changed.

"Initially after the race, my comments were obviously very nice towards Alex and everything, just because of the situation I was in," Norris explained.

"The brakes weren't working properly, I was about to miss the corner a little bit, or I had a slight oversteer as I was going into the corner.

"When I was in the car, I thought I had a gap, which I did, and when I went in this corner he was suddenly there. So, I knew he came from quite a long way back, but when I was driving he was just on the inside, it was very quick how it happened.

"I went straight off the track, I didn't know where he ended up. From when I was in the car, it didn't look like he went off.

"I didn't even think there was any contact between us - I don't know why.

"But then as soon as I watched it back, then it looked very different to how it felt.

"He came from a very long way back, the angle he came into the corner was very acute for how he was going to make it into the corner. He ended up with two wheels on the astro, and there was contact.

"I was more unhappy, after reviewing it, with what he did - because he made contact, he came from a very long way back.

"If I didn't have any problems with the brakes or anything, I'm 99.9% sure we both would've crashed, possibly been out of the race." 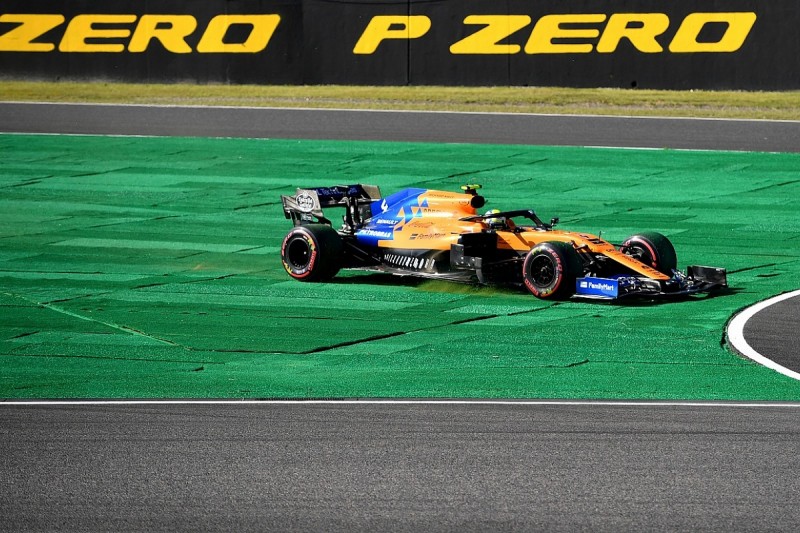 The incident was "noted" by the stewards but no investigation followed.

"I think he should've got a penalty," Norris added. "If he was a bit more alongside me, he wasn't coming in at quite the angle he was coming in at, and he made the corner, then I think it would've been fair.

"But considering he came from where he did, the angle he was coming at - he came pretty alongside, not rotated for the corner or anything - now I say he should've got a penalty."

Norris said Albon, who is a "good friend", sent him the video of Ayrton Senna and Alain Prost's infamous collision at the same corner in the 1989 race.

But while the latest incident had not upset him, Norris admitted he would have taken it a lot harder if his race had not been already compromised.

"If I didn't have the problem and that happened, then I would've been a lot more annoyed with what he did. I [would've been] on for good points, he was a much faster car, he obviously got past Carlos [Sainz Jr] quite easily with the undercut," Norris added.

"He didn't need to take as big a risk as what he did. With the situation we had, we were happy, we kind of laughed about it after, but I don't think it would've been as jolly and as funny if it happened again, basically, without my problem."