Closer analysis of the changes to the sidepods and rear wings has revealed just how ingenious and well-considered the developments have been, and the clever lateral thinking employed to incorporate them.

Giorgio Piola and Matt Somerfield delve deep into the modifications to reveal what's behind them.

Never has the phrase 'go big, or go home' been more apt, as the update introduced by Mercedes in Austria is, at least from a technical perspective, a statement to behold.

Mercedes made only minor alterations to its 2018 challenger over the opening eight races, as it looked to extract the best it could out of what it had. Meanwhile, back at the factory, the design team was clearly focusing its efforts on something much bolder - a total revamp of the W09's sidepods. 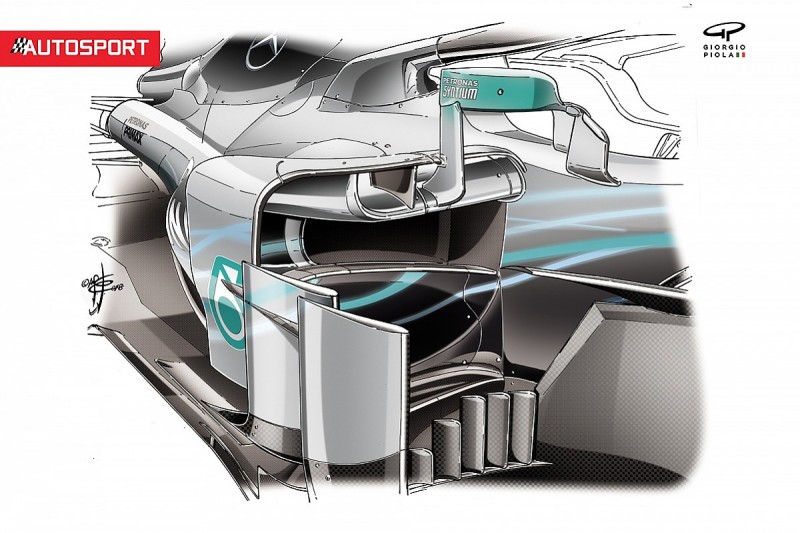 As can be seen in the image above, extensive modifications have been made to the W09's sidepods, as the cooling inlet has been pushed back and more bodywork added to improve flow around the centre of the car.

The alterations will likely result in a change to its low to high speed handling characteristics, and hopefully make it a car for all tracks and conditions.

It is possible that these changes are as a direct result of the work done by the Mercedes engine division, with this latest car update designed to work inline with the upgraded power unit.

The sidepods on first appearance may look similar to the concept first introduced by Ferrari in 2017, and are merely a reinterpretation of that idea based on the restrictions posed by using what is considered the conventional position for the upper side impact protection spar (below, right inset, Mercedes W05).

The position of this has been fundamental to the different design approaches we have seen in recent seasons. 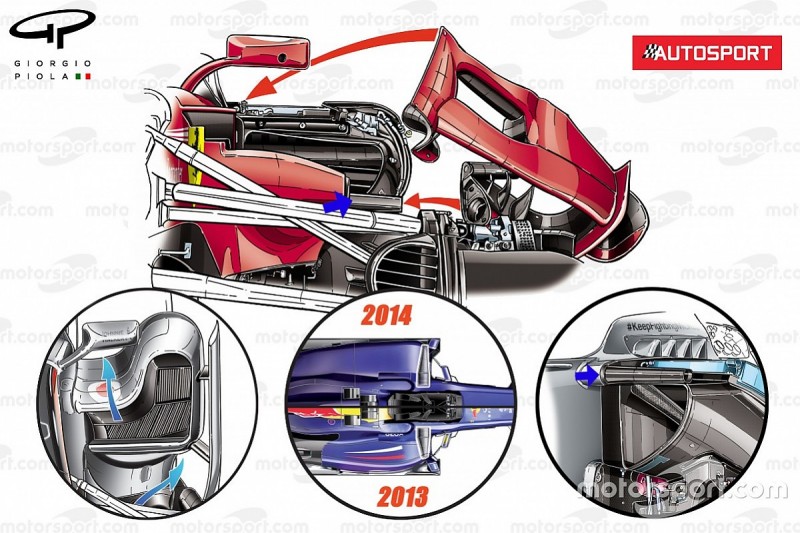 The side impact protection spars became specification items in 2014 (i.e. all teams use the same design), as the FIA looked to cut costs.

In the years preceding this, the designers began utilising more and more complex designs, reducing the spar's footprint, while still meeting the absorption rates required to pass the crash tests.

In achieving their goals with the side impact spars, the designers could begin to look at more radical designs for their sidepod bodywork, such as the 'U-Pod' employed by McLaren in 2011 (above, left inset), or the extremely narrow sidepod designs championed by Red Bull during its title-winning years.

The regulations introduced in 2017 afforded much more freedom in the area ahead of the sidepod for bodywork, something that Ferrari pounced on, placing its upper side impact protection spar in a lower, more forward position (main image, blue arrow).

In 2018, Ferrari made improvements to its original concept but was also joined by Haas, Red Bull and Williams, as they too looked to alter the behaviour of the airflow in the middle of the car.

There are two key reasons for this:

* The inlet is placed in a periscope position, protected by aerodynamic devices ahead of it, which prevent the upwash from the front wing and turbulence created by the front tyre becoming an issue. (Turbulent airflow left unmanaged can contain destructive energy, which results in inefficient cooling).

* Placing the inlet in a higher position also allows the bodywork beneath it to be redesigned for aerodynamic profiling. Of course the overall shape of the sidepod is dictated by the ancillary powerunit components within but, it's a trade-off, one that aerodynamics often triumph over. 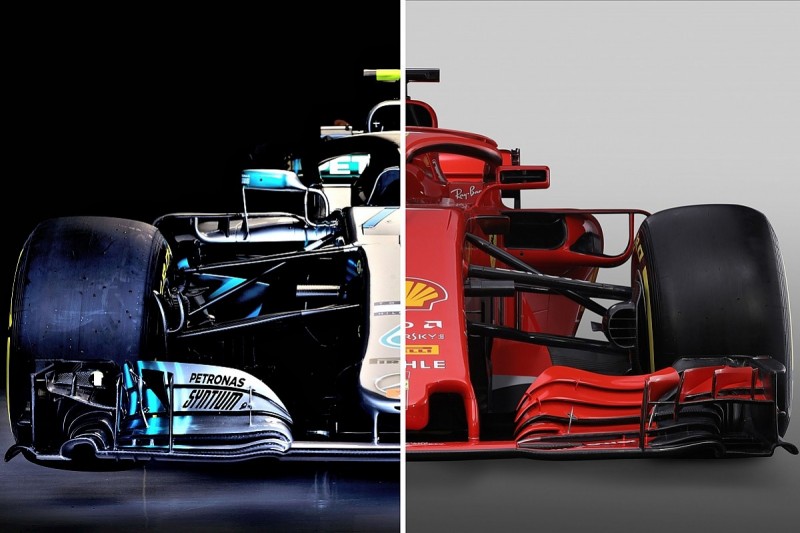 It's important to note that such ideas do not work in isolation - they are concepts that are interlinked with other key design parameters, such as the front suspension, which disturbs the airflow en route to the sidepods.

Ferrari has clearly lowered its front suspension, clearing the airflow's pathway to the sidepod, whereas Mercedes opted to raise its, giving it more potential freedom to the bargeboards and floor. The fact that the two cars are so close in performance shows that both solutions have their advantages and drawbacks. 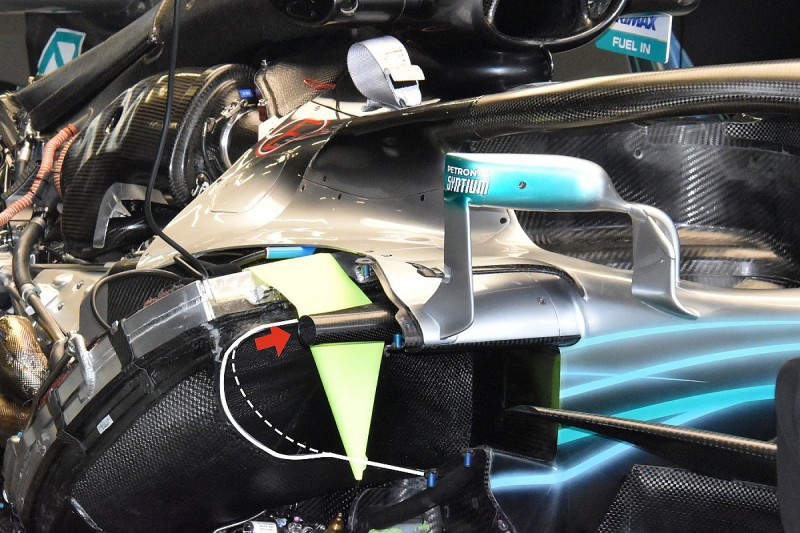 Mercedes has been unable to relocate the inlet into the higher position favoured by Ferrari, as its side impact spar is already in the highest position possible. Moving this would require a new crash test and need new chassis to be prepared, which would be a huge diversion.

As such, Mercedes has worked around the issue - cutting away a section of the inlet housed within the sidepod to increase its flow potential (the dotted white line denotes where the old inlet edge lay).

This also means that the inlet can now be stepped back, as the surrounding bodywork obfuscates it, shielding it from any damaging flow structures that might otherwise reduce performance.

Numerous optimisations have been made in conjunction with this new sidepod concept, including changes to the bargeboards, the floor's axehead and corresponding shortening of the deflector panel above, plus the inclusion of an additional mirror support and a new chassis canard. 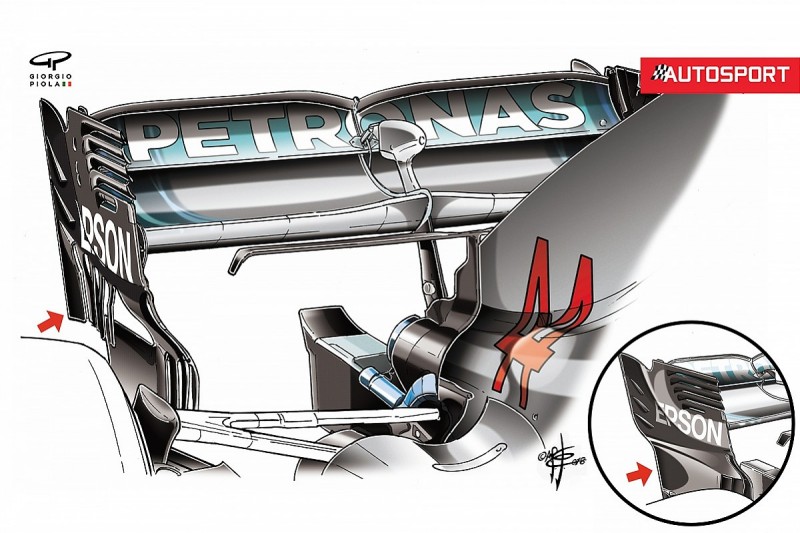 Not content with this radical overhaul of the car's midriff, the team also paid close attention to the rear too - introducing a new rear wing.

The design takes inspiration from a solution that McLaren has been using since the start of 2017 and utilises the wording minutiae in the regulations to add these overhanging strakes in a box area that's supposed to create the transition between the wider upper section of the wing and the narrower lower section.

Drivers should be steering F1's future, not teams