Why longer wheelbase cars could be 2019's Formula 1 trend

In a bid to allow drivers to push harder for longer in races, rather than being held back by fuel conservation, a rule change has been introduced for this year to increase the fuel limit from 105kg to 110kg.

The extra five kilos should assist with minimising fuel saving at some of the marginal races, and help rid F1 of the lift-and-coast tactics that both drivers and fans hate so much.

But the extra fuel does not come without some downsides - because if teams want to use the maximum amount possible, they will need to increase the size of their fuel tanks and that means taking up some of the valuable space in the middle of the car.

Teams cannot simply make their fuel tanks taller, because F1's technical regulations are strict that fuel must be kept no more than 400mm from the longitudinal axis.

The only solution then, with FIA rules stipulating a specific location in the centre of the chassis, is a longer fuel tank - which means either trying to cram in the components that sat behind the old fuel tank into a smaller space, or going longer.

Last year, there was a significant different in the wheelbase concepts of the top three teams.

Red Bull was the shortest at 3550mm, with Ferrari coming in at 3621mm (both were an increase on 2017), while Mercedes had stuck with its 3726mm length from the previous year. 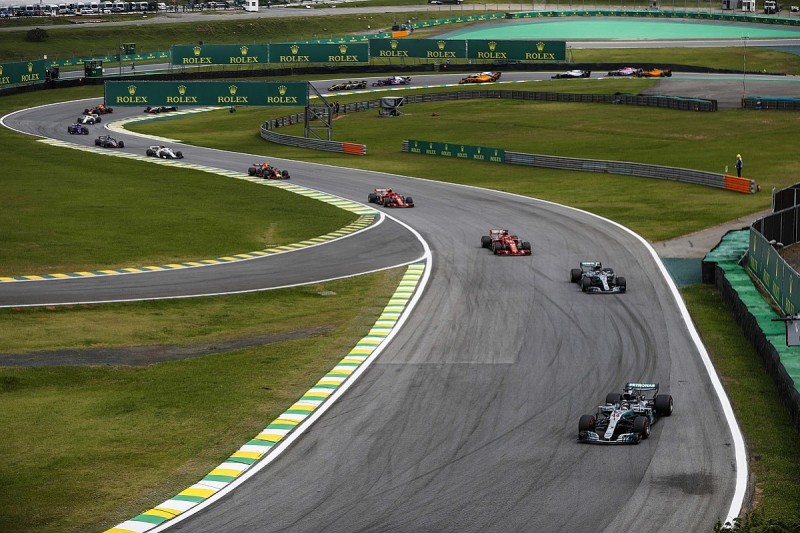 Mercedes is likely to be reluctant to go longer with its car, having maintained that concept for the past two seasons. It may well try to simply better package things at the rear of the design.

Even if the champion team has to increase the length of the car itself, it could still opt to stick with the same wheelbase so it heads into 2019 with a known concept.

Red Bull and Ferrari have some room to go longer - with estimates suggesting that packaging another kilogramme of fuel will require an extra 7mm. That means teams could be forced to go more than 30mm longer - and some may choose to go for as much as 50mm.

The other factor that will come into play is that if teams are forced to extend the wheelbases of their cars, they may be tempted to fully adopt the Mercedes route and go very long.

Mercedes has long been convinced about the benefits of a longer car, with the extra body surfaces that are able to generate downforce outweighing the extra weight and lack of agility in slow speed corners.

Speculation coming out of Ferrari has hinted that it may well have been tempted to go longer again this year. This is the result of a potentially longer transmission to move the engine away from the rear wheels - which has helped create the possibility of a radical rear axle.

If Ferrari has gone down that route, then to help comply with the regulations (because the car's weight distribution is defined by the FIA) it will likely need to have to move its front wheels forward.

Doing that could then free up scope for new ideas for more aggressive sidepod solutions, which is an area where Ferrari has led the charge in recent seasons.

Finding downforce and aerodynamic efficiency here will be even more important now that the 2019 front wings are less efficient and the bargeboards are lower and longer.

Some teams may take a totally different approach to the new fuel factor and choose to ignore the extra allowance.

Even though fuel has been marginal at some races, there have been plenty of times when teams actually under fill for grands prix so they benefit from running a lighter car.

With 10kg of weight worth an average of 0.3 seconds per lap, there will be an obvious performance incentive not to fill the car up to the maximum.

That tactic won't be suitable for all races, but there could be an inherent advantage at some events from having a shorter car with a more compact fuel tank to run lighter.

The flipside is that performance could be compromised too much at those events where extra fuel is needed and teams that eschewed the larger fuel tank will have to run conservatively.

The other factor that needs to be weighed up is that the new aero rules for 2019 are going to result in higher drag car - which in simple terms means that more fuel needs to be burned off to get up to top speed on the straights.

The risk of not having the full fuel allowance is that you get things dramatically wrong. That could leave a team not only on the back foot, but potentially in need of all-new car.

Sebastian Vettel: Michael Schumacher would be proud to watch Mick