When Haas Formula 1 boss Gunther Steiner turned up to his post-race media session in Bahrain around 20 minutes later last Sunday, he was very apologetic.

“Sorry guys, we had to do a team photo!” he said to the assembled journalists before taking a seat to discuss one of the feel-good stories of the day: Kevin Magnussen had just finished fifth, giving Haas its first top-10 finish since Nurburgring 2020, and more points in two hours than it had scored in two years.

No-one begrudged him for being late; after all, it was for good reason. Haas finally had some great news to celebrate after two tough seasons that offered little joy in terms of results, and a turbulent period off-track with the exit of Nikita Mazepin and title sponsor Uralkali.

The Haas hype train had been chugging along through the second pre-season test as the pace of the VF-22 car started to shine through and Magnussen’s return was secured. Once Magnussen stuck it seventh on the grid in qualifying, it was clear its time as a backmarker outfit was over, something only solidified by his run to fifth in the race to mark the team’s best result since Austria 2018.

Arriving in Saudi Arabia this weekend, there was a natural spring in the step of everyone at Haas. The team sits a remarkable third in the constructors’ championship, trailing only Mercedes and Ferrari. While Steiner made clear post-race he didn’t expect that to last, he was happy for Haas to “enjoy the dream” and soak up the success that had been so long in the making.

But when Steiner called up Gene Haas after the race in Bahrain, the team owner was quick to ask about next week: could Haas be fighting in the same kind of ballpark in Jeddah? The breakthrough result has arrived, now it’s a matter of making it a regular occurrence.

The very nature of drivers and teams in F1 is to look ahead and think bigger - so for Haas, the only real next step from here is to think of a podium finish, something it is yet to achieve since joining the grid in 2016. For a team that scored zero points last year and had to bide its time through a transition year, it is a remarkable turnaround that has exceeded even its own expectations.

“Every team wanted to be right up there, but I think nobody actually anticipated the issues we might face, because otherwise we wouldn’t have those problems,” said Mick Schumacher, who admitted to being disappointed with 11th in Bahrain. “We surely didn’t think we would be that far up. We thought we would be in the midfield, but to be actually at the top of the midfield is something quite impressive.”

It is impressive, particularly given how crowded and competitive the F1 midfield has been lately. Freak results or races that have cropped up in the past couple of years have tended to reward those lurking just off the leading teams, with Esteban Ocon and Pierre Gasly’s victories being proof of that. 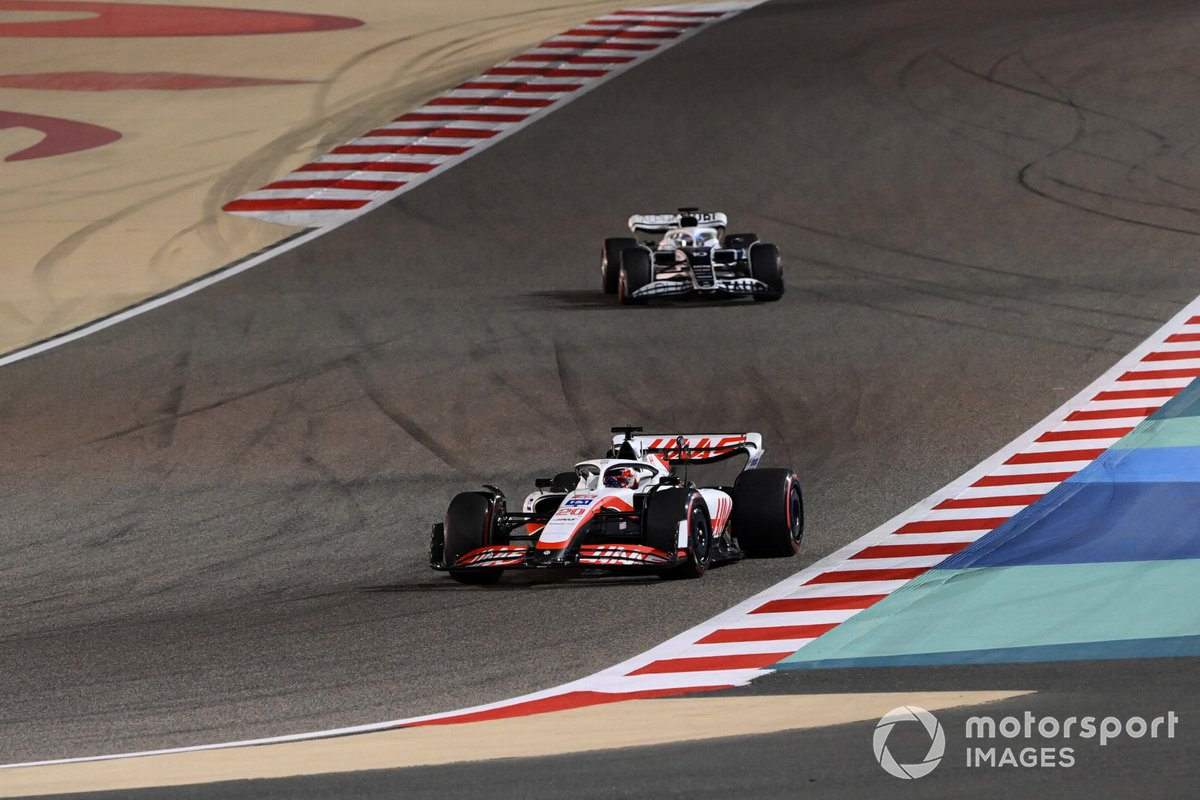 Last season, only two teams - Haas and Alfa Romeo - didn’t score a podium, largely thanks to some crazy results in Baku, Hungary and Spa. At a time when all teams are getting to grips with their new cars and reliability is a big concern, it’s not out of the realm of possibility to think a shock podium could be within Haas’s reach if it can maintain its midfield-leading form.

“If you're always just behind the top teams - which I guess is the best you can hope for, unless you're in a Mercedes, Ferrari Red Bull - if you're right there, then you're the first one to get that podium if stuff happens,” said Magnussen.

“I don't see us driving onto the podium on pace anytime soon. But I could kind of expect to be in the position we were in in Bahrain, leading that midfield. You'd hope that we can do that more often, and to kind of keep that level, that’s got to be the target.

“Then if you there, then you're the first one to receive the podium if you have that lucky day where a lot of people have problems and which has happened before.”

Magnussen was realistic, saying he was “not expecting it”, knowing the pace of the leading three teams right now and the challenge Haas would have to get close to them. But he admitted the chance of snaring a podium had crossed his mind. “I don't think we have the pace to be driving onto the podium - but I'm am dreaming about that podium…” It’s been a long time since the Dane’s last F1 podium on debut back in 2014.

Schumacher echoed Magnussen’s thoughts, saying the goal for Haas was to be in the right place at the right time so it could capitalise on issues for those further ahead. “We want to be close enough to pick up the pieces when things fall apart in front,” he said. "I would not say that there is no chance of us maybe being on the podium sometime this year. We have 22 races left, so a lot more chance of it being a crazy weekend coming our way.”

So why not Saudi Arabia? Although the podium of Verstappen-Hamilton-Bottas was run-of-the-mill by 2021 standards, the race itself was filled with drama and incidents, including two red flags. While there have been tweaks to the track for this year to make for a smoother race for the drivers, the fastest street track in F1 could still easily throw up a surprise or two. 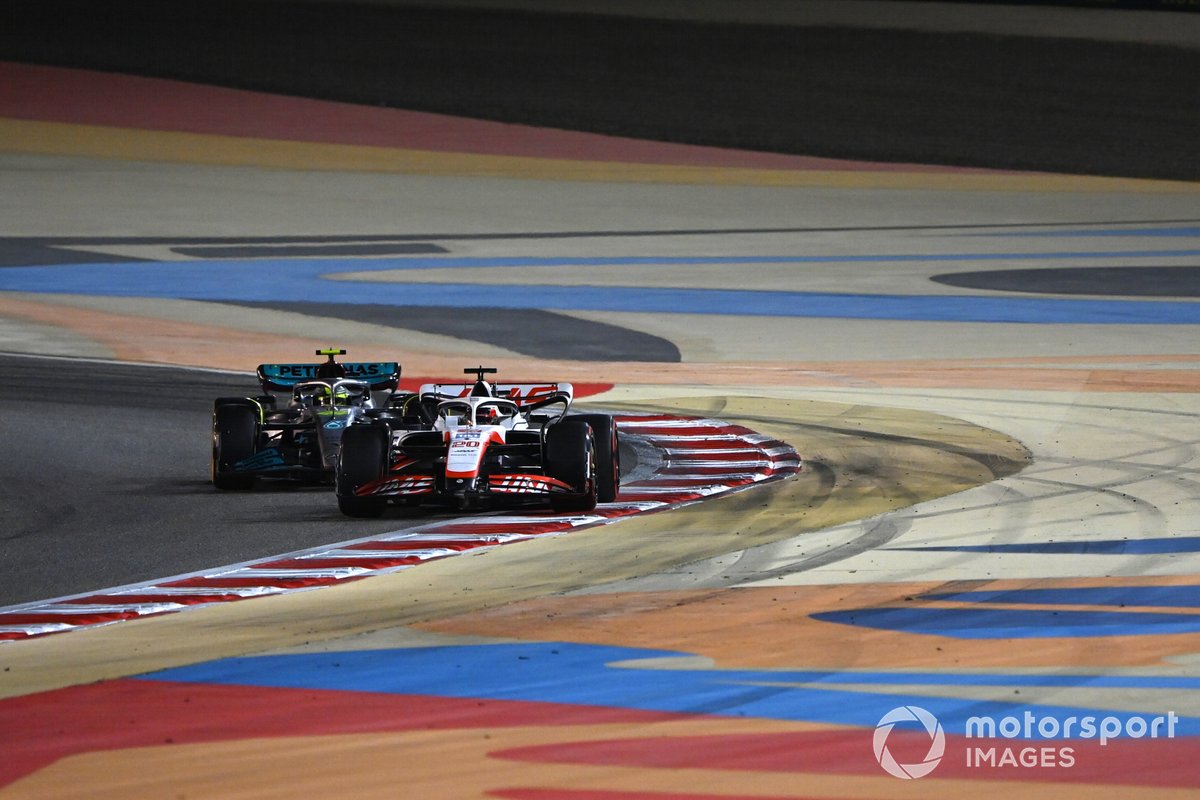 Haas will know the fight in the midfield will only get tougher this year as rivals develop their cars and wring more performance out of them. But the very fact the team is even able to give consideration to nabbing a shock podium shows just what a turnaround has been undertaken there.

In the Bahrain post-race media session, Steiner joked it had been “two years of shit” for Haas, making the team photo something important. If it can snare a podium, there would be reason to call another one.

“I hope we there at the right time and the right place,” Steiner said in Jeddah on Thursday. “I don’t know if we’ll ever get this lucky. But if it arises, hopefully we are there. There were a few smaller teams in the last two years getting podiums that we didn’t expect.

“If there is an opportunity, maybe we can take it. It would be very nice.”