Max Verstappen's dominance after the summer break has put him 109 points clear in the Formula 1 championship standings. Here's how he can win the title in the coming races.

After seeing Verstappen romp home to victory from P14 on the grid in Belgium Mercedes team boss Wolff suggested that "we are in a situation where the championship will be concluded in Europe, probably".

While technically not possible, Wolff's hyperbolic comment was perhaps a factor of just how soul-destroying Verstappen's pace was for the competition.

After being kept honest by Charles Leclerc and Ferrari in the opening third of the season, Verstappen is now running riot in the championship, starving whatever was left of the 2022 title battle of oxygen and instead placing it on life support.

Which drivers can still win the F1 world title in 2022?

With seven races to go, there are still 190 points to share, while Verstappen is now 109 points ahead of both team-mate Sergio Perez and Leclerc. Theoretically, however, there are still six drivers who can become champions. Carlos Sainz, George Russell, and Lewis Hamilton are also fewer than 190 points behind Verstappen, meaning they still have a chance at the title. 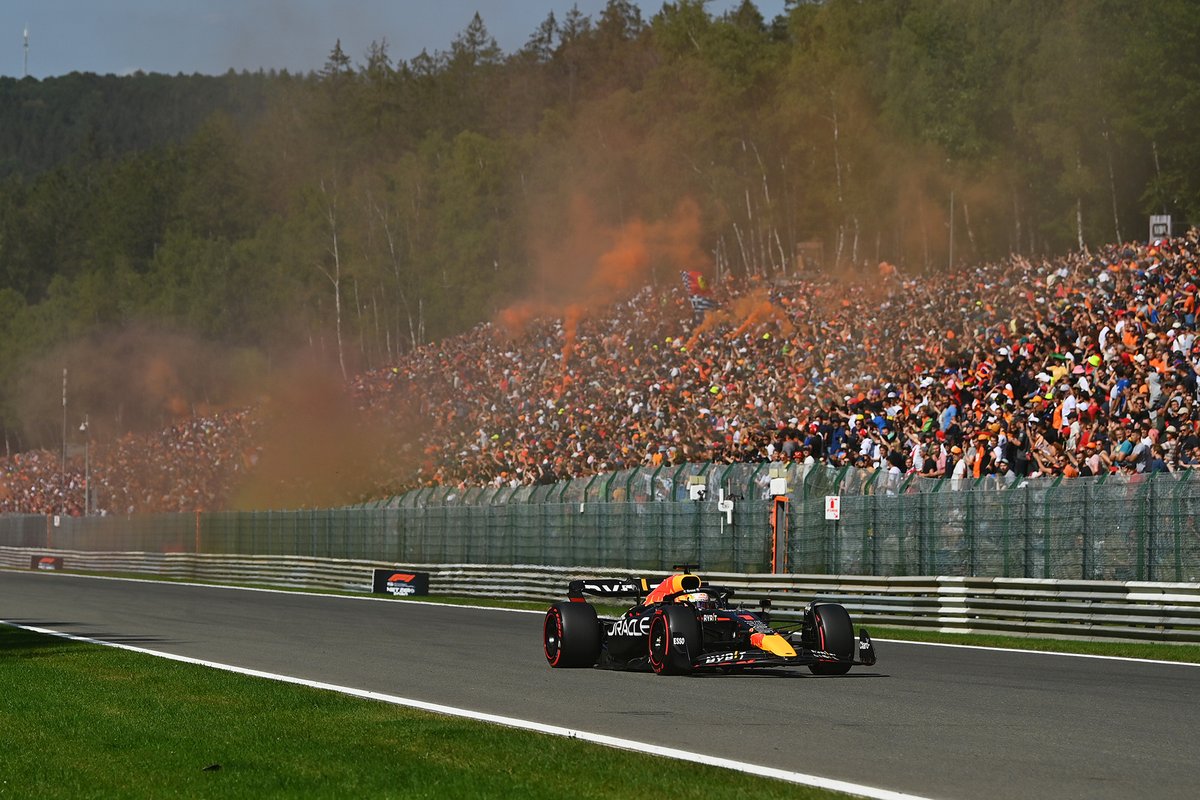 Max Verstappen dominated in Belgium after starting from the 14th grid spot.

When is the first moment that Verstappen can become champion?

All Verstappen needs is three wins from the remaining seven races to seal the deal.

Verstappen wrapping up the title at his earliest convenience could happen as soon as Singapore, with five races remaining, but then he needs to win the next two races in Monza and Singapore with both Perez and Leclerc not scoring a single point.

For simplicity's sake we'll assume that the winner also takes the bonus point for fastest lap and then the situations looks as follows.

That's the most extreme projection, so let's look at what's plausible instead.

At Zandvoort Verstappen clinched his tenth race win of 2022, and our second scenario is that Red Bull now has the fastest car for the remainder of the season.

Verstappen’s win and fastest lap in Zandvoort, coupled with a third for Leclerc and fifth for Perez, put both drivers 109 points behind.

If Verstappen were to continue his streak and take the maximum haul of 26 points in Monza and Singapore and Perez were to finish second each race, that would take the Dutchman to a 117-point lead with 138 remaining.

After the following race at Suzuka the number of points on offer shrinks to just 112. Perez would have to outscore his team-mate at least once, and by more than the difference between first and second, to avoid Verstappen going big in Japan.

The above logic obviously also applies to Leclerc, who is more likely to take points off Verstappen given the Mexican's supporting role.

If Verstappen wins in both Italy and Singapore, and Leclerc finishes third, then he will be out of contention at the end of the Singapore race. Verstappen wins with Perez finishing second means he clings on for one more race, with Verstappen becoming champion in Japan.

In order to prolong the wait until Austin, Perez and Leclerc need to leave Suzuka with a gap smaller than 112 points.

Perez can lose no more than 18 points over the next four races, and Leclerc just 23, bearing in mind that on equal points Verstappen's win tally will tip him over the edge.

For the championship to last until Mexico, both drivers must soon start outscoring Verstappen instead of ceding more ground. Perez and Leclerc have to claw back 24 points. Beyond Mexico, there are just 60 points on offer in Brazil and Abu Dhabi, so barring a dramatic turnaround it doesn't appear feasible that Verstappen's rivals will last that distance.

Given Verstappen's and Red Bull's dominance, then, our projection is that Japan's Suzuka will be the most likely scene of the Dutchman's second coronation.

If Leclerc and Ferrari can find some pace to turn the tide, or if Verstappen were to run into some issues, then Austin's Circuit of the Americas could hold its first title decider since 2015.

Which driver was crowned F1 champion the earliest?

But that would not be a record because in 2002 Michael Schumacher was crowned world champion for the fifth time after 11 of 17 races - with six races left. In 2004 the same Schumacher became champion with four races to go, something that Sebastian Vettel also achieved in 2011. From the current field, Lewis Hamilton (2015 and 2020) and Vettel (2013) became champions with three races left.

"But things can change very, very quickly. We saw that: I think we were 46 points behind when we left Australia and within a couple of races had managed to turn that around.

"Our prerogative is on each race, one at a time and the championship tables will take care of themselves, so we just want to keep this momentum rolling forward."